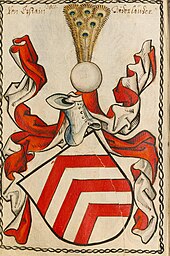 The Eppstein coat of arms in Scheibler's book of arms

The lords of Eppstein were an old noble German noble family and descended from the lords of Hainhausen (also known as lords of Hagenhausen) in Rodgau , which can be proven since 1107 . Their ancestral seat was the Hainhausen moated castle , the remains of which have been preserved as a ground monument under a meadow near the Rodau . It is considered likely that the Lords of Hagenhausen descended from the earlier Franconian Maingaugrafen . The Lords of Hausen were a sideline of the Hagenhausen family with a moated castle near Obertshausen near Rodgau . The von Rumpenheim and von Heusenstamm families were probably also related to the Hagenhausen family.

Eppstein Castle in the Vordertaunus became the center of the family's continually growing territorial property, the Eppstein lordship until 1492 . Large parts of this rule finally passed into the hands of the Landgraviate of Hesse and of Kurmainz .

Blazon : “Three red rafters in silver, the top one touching the edge of the shield. - On the helmet with red and silver blankets, a red pagan hat with a silver brim, decorated with a silver ball, on which there are six natural ostrich feathers (3: 2: 1). "

In the Ingeram Codex : “Three red rafters in silver, the top one touching the edge of the shield. - On the helmet with black and silver blankets, a black round hat with a folded-up silver brim, equipped with a silver ball, on which three natural ostrich feathers. " 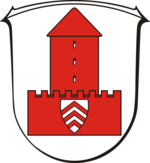 Coat of arms of today's Rodgau district of Hainhausen. Shown is the moated castle, ancestral seat of the later Lords of Eppstein

The Lords of Hainhausen are first mentioned in writing in 1108 in a document from Archbishop Ruthard of Mainz , where "Helith de Haginhusen et frater eius Siewin" are named as witnesses. The document shows that they not only had good connections to Mainz, but also to important aristocratic families in the region, as they are named between the Count of Nürings , the Count of Bernbach and Heinrich von Konradsdorf , among others .

The ancestral seat of the Eppstein family on an engraving by Matthäus Merian , 1646 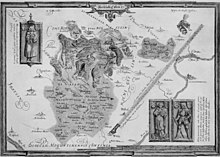 After the Lords of Hainhausen came into possession of Eppstein Castle between 1183 and 1190, they called themselves Lords of Eppstein from then on. Gerhard II von Hainhausen is considered the progenitor of the von Eppstein family. His son Gerhard III. von Hainhausen was the first to call himself Gerhard I von Eppstein after the new family castle. Their possessions were concentrated in the Taunus , Untermain , Rodgau and Spessart, as well as in the Wetterau and Westerwald . Family ties can be demonstrated to, among others, the genders of those from Bolanden , Wied , Isenburg , Hohenfels , Nassau , Falkenstein and Katzenelnbogen .

Since the end of the 12th century, the Eppsteiners experienced a rapid rise to one of the most powerful families of the High Middle Ages . Between 1200 and 1305 they presented with Siegfried II , Siegfried III. , Werner von Eppstein and Gerhard II. Four archbishops of Mainz.

The family's steadily growing territorial possessions resulted from a prudent marriage policy and numerous inheritances. Half of the wealthy County of Wied and half of the Kleeberg rulership came to the Eppstein family through marriage in the 13th century . In the 14th century, half of the lordships of Breuberg and Trimberg were added. Another century later, half of the Falkenstein reign and half of Diez fell to him. Taken together, their lands would have done credit to a small principality , but the majority of the lands were not allodial property of the family, but consisted of fiefs from the king and various counts , for example the Counts of Loon , the Count Palatine and the Count of Rieneck . Nevertheless, the brothers Eberhard, Georg and Philipp, Lords of Königstein, Eppstein and Munzenberg, received the right from the Roman-German King Maximilian I on August 6, 1505 to use the title, name and coat of arms of the Counts of Königstein .

The proximity of the Eppsteiner to the Archdiocese of Mainz had a great influence on the development in their home country in Rodgau and on the Main. Over time, the Eppsteiners had formed a closed territory there, with the administrative seat in Steinheim ( Amt Steinheim ). In 1425 Gottfried von Eppstein sold this office for 38,000  guilders to the Electorate of Mainz .

As early as the beginning of the 13th century, the family split under Gottfried II and Gerhard II into a younger and an older line. The latter died out in 1269 with Gerhard IV in the male line, which triggered a ten-year feud between the still existing younger line and the descendants as well as the widow of Gerhard IV. For the inheritance. The Counts of Katzenelnbogen emerged particularly successfully from this dispute and were able to win a large part of the Eppstein property for themselves. Many historians see this dispute as the beginning of the end of the previously influential Eppsteiners, who sank into insignificance again at the beginning of the 16th century, before they finally died out in 1535.

In 1433 the brothers Gottfried VII and Eberhard II divided the paternal inheritance among themselves - the so-called Eppsteinische brother division - and founded the lines of Eppstein-Münzenberg (Gottfried VII.) And of Eppstein-Königstein (Eberhard II.) The attempt, the Bringing the two lines together again in the 16th century, despite the engagement and the already signed marriage contract, failed because the designated bride, Agnes von Eppstein-Munzenberg († 1533) - heir to the last male representative of the Munzenberg line - secretly preferred the count Emich IX. von Leiningen-Hardenburg to marry. All efforts of the duped groom, Eberhard IV. Von Eppstein-Königstein, to have this marriage canceled, were unsuccessful. Agnes and her husband Emich IX. resided at Hardenburg Castle in the Palatinate and had the grave chapel of their family line built near the Bad Dürkheim Castle Church , where they were also buried.

At the turn of the 15th to the 16th century, the rule of Eppstein-Münzenberg was heavily indebted due to lavish court keeping, expensive castle building and numerous feuds. Much of the property had to be sold; in particular, in 1492, half of the Eppstein lordship came to the Landgraviate of Hesse .

The Eppstein-Münzenberg line died in 1522 with Gottfried IX. who had renounced the rule in 1507 for an annual fee in favor of his Königstein cousin. Only 13 years later, the Königstein line suffered the same fate; its last representative, Eberhard IV. Died in 1535. The inheritance passed to the Counts of Stolberg through his sister Anna, who had married Count Botho zu Stolberg . Two generations later, after the death of their sons Ludwig (1574) and Christoph (1581), the County of Königstein was annexed by Kurmainz, the only remaining property to the Stolbergers was Ortenberg and Gedern and a share in Butzbach.

Commons : Coat of arms of the Eppstein family  - collection of images