Family coat of arms of those of Heusenstamm

Heusenstamm (also lords of Heusenstamm ) is the name of a German noble family with ancestral seat in Heusenstamm , today Offenbach district in Hesse , who were the hereditary marshals of the Electorate of Mainz from 1548 to 1803.

The Heusenstamm as well as the Hagen-Münzenberg , the Dornberg and the Erbach probably go back to a single original family. The Meier of the later Emperor Otto I , Wetti , who is named in a document dated February 14, 947, can be regarded as an ancestor of these tribes . In it Otto I. gives his "nostro villico" Wetti a royal hoof as a personal property in Seckbach . 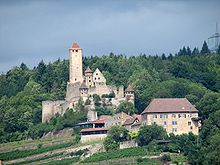 In 1211 Gottfried I. von Hagenhausen-Eppstein transferred his fiefdom over the village and castle Heusenstamm as a so-called after fiefdom to Eberhard Waro (von Hagen). His successors were the brothers Johann, Conrad, Siegfried and Eberhard. The defense tower of the old Heusenstamm Castle is still preserved on the Bieber behind the Heusenstamm Castle. The lords of Heusenstamm were probably related to the lords of Rumpenheim . Their common ancestors had rich possessions in the old Maingau , which is why it can also be assumed that they were related to the Eppsteiners.

The rulership of the Lords of Heusenstamm extended beyond their ancestral seat. Numerous documents from the following decades and centuries show that they owned property and some fiefs in the following places: Graefenhausen , Wachenbuchen , Groß -zimmer , Frankfurt , Nauheim and Rüsselsheim . However, numerous changes occurred in these ownership structures over the course of time.

In the forest of the former Dreieich, the Lords of Heusenstamm built an estate called Creyen-Bruch in 1586 (Grauer Bruch, trachyte stone used to be broken there). The name soon changed to Gravenbruch .

In 1616, after several deaths , the rule of Heusenstamm came completely to the sidelines that had moved to Vienna. The Austrians had little interest in their ancestral seat and leased it to the Frankfurt patrician family Steffan von Cronstetten . In 1661 the property went to the von Schönborn family , who lost it in the mid-1970s.

Blazon : The coat of arms shows three ascending silver tips in red; on the helmet with red-silver covers a red bracken trunk , the hangings are marked with five silver dots.