The County of Wied (since 1784 Principality of Wied ), named after the river Wied on the right bank of the Rhine , was a territory of the Holy Roman Empire of the German Nation in the area of ​​the Westerwald and today's district of Neuwied . It existed from around the beginning of the 12th century to 1806 as an independent territory of the empire and from 1815 to 1848 as a class rule within Prussia .

In the course of its history it was divided and reunified several times between the various branches of the wiedische count house. The Upper County was around the centers of Dierdorf and Runkel an der Lahn, the residence of the Lower County was originally Altwied Castle , and the town of Neuwied from 1653 to 1848 . The former ruling dynasty belongs to the high nobility .

The beginnings of County Wied are in the dark. Their territory as well as that of the later County of Sayn , the right and left Rhine areas of the Cologne and Trier electors as well as the possessions of the later Duchy of Jülich , the House of Nassau and the Count Palatine near Rhine were fragments of the former Salian and Hohenstaufen great Palatinate (Palatia maior), which in turn had emerged from the Franconian Lotharingien . A county of Wied as an independent territory only becomes tangible when this original palatinate county was broken up. However, it was always considered a fiefdom of the Count Palatine near the Rhine.

Metfried , who was Gaugraf in Engersgau , is considered to be the founder of the House of Wied . The family was wealthy north of the Lahn , but also on the left bank of the Rhine. He and his brother Richwin von Kempenich are named as witnesses in a certificate from the Münstermaifeld monastery in 1103 . In 1129 the same Metfried appears in a document from the St. Thomas monastery in Andernach , this time under the name "Meffridus de Widhe". This is the first clear indication of an independent rule of this name. In it, Metfried probably combined own property around the castle, later known as Altwied , the construction of which may have started at this time, with rulership rights with which the Count Palatine had enfeoffed him. Metfried's son Arnold (around 1098–1156) was Chancellor of King Konrad III of the Staufers . and Archbishop of Cologne , which underlines the importance of the family at this time. Metfried's successor was his son Siegfried von Wied .

Count Dietrich von Wied (1158–1200), a grandson of Metfried, appears in a document issued on April 26, 1158 in Sinzig alongside Count Palatine Konrad as a witness. It is not recorded that the Count Palatine Dietrich von Wied enfeoffed. In a wiedische document from December 25, 1190, however, the Archbishop of Cologne gave him a fiefdom at Olbrück in today's Ahrweiler district . The sons of the count are granted the right of inheritance to the fiefdom, but not his daughter Theodora, who married Count Bruno von Isenburg , out of concern about possible estrangement . In addition to Olbrück, Erzköln also awarded other small areas in the Koblenz (Bassenheim) and Neuwied ( Heddesdorf ) area to the Counts of Wied zu Lehen in the 13th century .

Georg von Wied (1197–1219) probably inherited his father Dietrich. He took part in the Fifth Crusade and often appeared alongside the Counts of Sayn and the Count Palatinate. Since he apparently left no heirs, his brother Lothar (1219–1243) gained rule. Apparently he did not leave any descendants entitled to inherit either. Since the other sons and daughters of Dietrich had entered the clergy, only descendants of his daughters Theodora and Isalda remained as heirs of the county of Wied.

The fiefdom of the County of Wied becomes completely clear on March 5, 1243: On this day Lothar transferred his fiefdom to Theodora's sons Bruno (II) and Dietrich. As early as 1238, Count Palatine Otto near Rhine had confirmed that after Lothar's death he wanted to enfeoff Bruno and Dietrich with the County of Wied. The document says that the Wiedische Graf is now, thanks to the generosity of the Count Palatine, in the duty of a vassal (single man). With Lothar , the first count's house died out in 1244, so that half of the rule passed to the two Isenburgers. The Lords of Eppstein appear as heirs of the other half , whose share was sold to the Counts of Virneburg as early as 1306 .

Second and third count house until the 19th century

The descendants of Bruno (II.) Von Isenburg , the Counts of Wied-Isenburg , who ruled the county's fortunes from the middle of the 13th to the middle of the 15th century, can be described as the second Earl's House . The legal status as a fiefdom of the Palatinate electors was preserved for the next centuries. Therefore Philipp von Isenburg confessed in 1352 (August 25th) that he had received the freedom of the court in Bendorf from the Count Palatine Ruprecht .

In addition to the fiefdom of the Electoral Palatinate, the Counts of Wied-Isenburg also held the areas of the Archdiocese of Cologne that were preserved in the 13th century. Bruno III., The son of Bruno II. , Asked the Archbishop of Cologne in 1265 for permission to sell this fiefdom. The sale did not take place, however, because in 1276 the son Johann I received permission from Archbishop Siegfried von Westerburg to use the fief for his wife Agnes as body breeding . The last verifiable Cologne feudal confirmations received the grandson of Bruno II, Wilhelm I, from the Archbishops of Cologne Elekt Adolf II. 1363 and from Friedrich III. 1372. 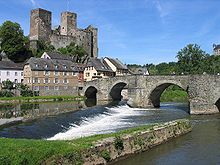 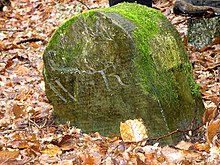 Since Wilhelm II von Wied-Braunsberg-Isenburg died in 1462 without a male heir, the county fell to Dietrich IV von Runkel , who was married to Wilhelm's niece, Anastasia von Wied-Isenburg. In any case, as early as 1460, Count Palatine Friedrich I enfeoffed Friedrich von Runkel, Dietrich's eldest son, "out of special grace for his faithful services" with half of the County of Wied. In 1473 this count even received the whole of Wiedische Grafschaft as a fief from the hands of the Count Palatine. In 1477, after Count Palatine Philipp took over the government, he repeated this enfeoffment of the entire County of Wied to Friedrich IV. Von Wied-Runkel.

Friedrich IV. († 1487) thus became the progenitor of the third and last count house, the House of Wied-Runkel . He had four sons entitled to inheritance, of which the oldest was initially named Wilhelm III in 1488. came to power. Wilhelm was also able to acquire the county of Moers . Since he died in 1526 without legitimate sons, his brother Johann III inherited. the county of Wied, while Moers fell to the county of Neuenahr through his daughter Anna . The two younger brothers, Hermann and Friedrich , had become clergymen: Hermann had been Archbishop of Cologne from 1515 , Friedrich Bishop of Munster . Although Hermann and Friedrich resigned their offices during the Reformation , they did not return to the line of succession.

When Johann died, his sons, Johann IV. And Philipp, divided the county of Wied into the so-called "upper" and "lower" counties. This division became final, because although the various side lines in the 16th and 17th centuries only survived for one or two generations in some cases, this division was renewed each time in the next generation under the two oldest sons: Friedrich III. , who founded the town of Neuwied in 1653 , divided the county with his brother Moritz Christian in 1640, also according to this scheme. Friedrich III. became the founder of the Wied-Neuwied line , Moritz Christian became the founder of the younger Wied-Runkel line . Wied-Runkel sold the village of Obertiefenbach to the County of Nassau-Hadamar in June 1649 and acquired the County of Kriechingen in 1726 .

Under Friedrich III. and his successors, the new residential town of Neuwied, founded in 1653, developed into one of the most important exiles in Germany. Religious freedom , which has been guaranteed since 1662 , resulted in a large influx of people from Germany, France and Switzerland and led to the fact that followers of seven different denominations and religions lived in the city in the 18th century: Calvinists , Lutherans , Mennonites , inspired people , Moravians , Catholics and Jews .

Neuwied Castle , residence of the Lower County since the beginning of the 18th century

Until well into the 18th century, the Counts of Wied continued to be enfeoffed by the Count Palatine, most recently in 1721 by Count Friedrich Wilhelm by Elector Carl Philipp . At the latest since the introduction of the Reformation , the county had been treated like an imperial principality . Until it was dissolved, it belonged to the Lower Rhine-Westphalian Empire and its respective owners were represented at the Reichstag as members of the Westphalian Count Bank . It was only with the elevation of Count Johann Friedrich Alexander , the grandson of Friedrich III., To the rank of imperial prince in 1784 that the electoral Palatinate did not grant lendings. In 1791 the Wied-Runkel line was also ruled with Christian Ludwig .

Johann Friedrich Alexander's son Friedrich Karl was also the last ruling prince of Wied. Because he had refused to join the Rhine Confederation , the principality was dissolved in 1806 under pressure from the French Emperor Napoléon and added to the Duchy of Nassau . In 1815 both territories fell to Prussia .

The princes of Wied in the 19th century

After the loss of their sovereignty, the princes of Wied-Neuwied retained the class rule over their former principality as part of the Kingdom of Prussia . When the Wied-Runkel (Dierdorf) line died out in 1824, they inherited it and reunited the two sub-counties of Wiedi after almost 300 years.

In 1846, Prince Wilhelm Hermann Karl applied to the Prussian government for the abolition of the class rule because the small principality could not be economically supported. In 1848 Prussia approved this waiver. The last remnant of the independent county of Wied ceased to exist.

Representatives of the House of Wied

The most important members of the house include:

The prevention of a fire served the strict rules of the House of Wied-Runkel from 1772 on the proper handling of flax , hemp , straw and hay , the use of lanterns , the tobacco pipe , and the removal of chips every evening in the carpenters' workshops , Wagner and Bender , the daily extinguishing of the stove and stove fire at a certain evening hour. According to the simultaneous building regulations, no more wooden chimneys were allowed to be erected, no more wooden hoses were allowed to be installed, which had to lead the smoke of the fireplace to the fireplace , as it was forbidden to lead stovepipes out of the window. According to Emperor Charles V's embarrassing court order , the author of deliberate arson should be put to death by fire. It was strictly ensured that every landlord always had a tub filled with water ready and a leather fire bucket with a name at hand. The respective municipality had to keep a certain number of them in stock. No resident was allowed to marry or be accepted as a subject who had not supplied the community buckets with a new one with the year and name.