Arnold von Wied together with the co-founder Hadwig von Wied in Proskynesis before the ruler of the world, accompanied by the four evangelists. Fresco in the St. Clemens Chapel in Schwarzrheindorf

He was a son of Count Metfried von Wied . It is not known who his mother was. He had three brothers and four sisters. Arnold was the second son to enter the clergy. He probably attended the collegiate school in Liège . There he came into contact with Wibald von Stablo . Both remained in contact by letter afterwards.

Around 1122 he became provost of St. Georg in Limburg an der Lahn . In 1127 he is documented as provost of Cologne . As provost, he was present as a witness at the issuance of numerous documents from Archbishops Friedrich I von Schwarzenburg and Bruno II von Berg . Documents from Bruno's time also come from him. From 1138 he was also provost of St. Servatius Church in Maastricht .

In the same year the Roman-German King Konrad III appointed him . to the chancellor . Arnold gave some of his own royal diplomas. The king entrusted him mainly with matters relating to imperial Italy and Lorraine. In the year of his appointment, he traveled to Northern Italy and Rome on royal orders. After his return he stayed both in Cologne and at the imperial court.

From 1147 to 1149 he took part in the Second Crusade . He was there when the crusade failed at Damascus in 1148 . He took part in the retreat and accompanied the emperor during his stay in Constantinople . In 1149 he returned to Cologne.

In Cologne, he joined the opponents of Archbishop Arnold I. on. This had been suspended in 1148. He soon took a leading role among the critics of Arnold I and had ambitions for the successor. As a result, he had to restrict his court service, which led to a temporary estrangement from Konrad.

He had a splendidly furnished double church built in Schwarzrheindorf near Bonn on the property of his family .

In 1151 he was elected Archbishop of Cologne by the clergy and people. He took over the office in an extremely difficult situation. The Archbishopric of Cologne was heavily in debt and weakened by feuds. Therefore Arnold declared himself unable to lead the archbishopric and only wanted to accept the election with the express consent of the emperor and pope. It played a role that he feared that his private fortune would be used to reduce the debts of the archbishopric. Arnold met with King Konrad in the church of Schwarzrheindorf. There the altars of the lower church were consecrated by Albrecht I of Meissen and Heinrich von Lüttich . Arnold himself consecrated the altar of the upper church.

Arnold and Konrad went to Cologne by ship. Both were given an enthusiastic reception there. In the cathedral of King Arnold gave the regalia . He was also granted ducal rights to the now extinct Lorraine ducat.

In late summer 1151 he traveled to Rome with Wibald von Stablo. On January 6, 1152 he was by Pope Eugene III. confirmed and consecrated in Segni . The Pope confirmed the rights and possessions of the Cologne Church and recognized the new ducal rights. On his return Arnold learned of King Konrad's death.

Imperial Arch Chancellor under Friedrich I.

In March 1152 Arnold took part in the election of the king in Frankfurt. He took the side of Duke Friedrich III. from Swabia. After the successful election, on March 9, 1152, Arnold crowned Friedrich I Barbarossa in Aachen Cathedral as Roman-German King. Arnold suggested that the king move to Rome immediately in support of the Pope. This request was rejected by the secular princes.

Arnold was also frequently present at court under Friedrich I. About 1153 he witnessed the Constance Treaty . He took as 1154 archchancellor the Italian campaign in part of Frederick. In 1155 he went to Rome as an envoy to prepare for Frederick's coronation as emperor by the Pope. In vain he advised the king against Wilhelm III. to proceed from Sicily. When Frederick I and the Pope first met at Sutri on June 9, 1155 and the king refused to perform the usual strator service, Arnold successfully persuaded Frederick to give in. Overall, too, he tried to balance the pope and the king. On June 18, 1155 he took part in the imperial coronation in St.

Even after returning across the Alps, Arnold was to be found at the farm on various occasions. But the proximity was less than in Konrad's time. 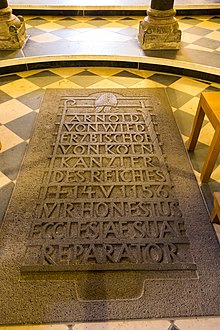 Tomb of Arnold von Wied in St. Maria and Clemens

Immediately after the election, Arnold began to win back estranged property from the archbishopric. He benefited from decisions of the court that determined that the archbishopric property could not be pledged or given as a fief. He also used the extended secular rights to fight feuds, restore peace and improve the judiciary.

He also came into conflict with competitors such as the Counts von Berg and von Arnsberg . Some of his actions, such as the destruction of Sayn Castle in 1152, benefited the family's own interests.

Spiritually, he was a supporter of the Siegburg reform in the Benedictine order . He supported the founding of a Benedictine convent in Schwarzrheindorf. He handed the management over to his sister Hadwig von Wied . Two more of his sisters also joined the start-up.

Arnold died on May 14, 1156 in Xanten from a fall that he suffered during a race. He was buried in the church of St. Maria and Clemens in the Benedictine monastery in Schwarzrheindorf near Bonn, which was founded at his suggestion.