Segni (Latin Signia) is an Italian commune with 9192 inhabitants (as of December 31, 2019) in the metropolitan city of Rome in the Lazio region .

Segni is 58 km southeast of Rome and 40 km northwest of Frosinone . It is on the edge of the Monti Lepini on a ridge above the Sacco valley . The municipality extends from 187 to 1,378 m slm, on Monte Lupone. The districts Pantano, Pietrafalla, Recchia and Torre Santi, which lie in the valley, belong to the municipality.

Segni is a member of the Comunità Montana Monti Lepini . The community is located in earthquake zone 2 (medium risk).

The municipal area of ​​Segni is crossed by the strada regional Carpinetana (SR 609) , which leads from Colleferro in the Saccotal to Priverno in the Pontine plain . The nearest motorway exit is Colleferro on the A1 Autostrada del Sole , 11 km away.

The Roma – Napoli high-speed line crosses the municipality without stopping. The nearest train station, Colleferro-Segni-Paliano, in Colleferro-Scalo on the Roma – Cassino – Napoli line , is 9 km away.

Segni, the ancient Signia, goes back to a settlement of the Volscians . The Roman king Tarquinius Superbus is said to be 513 BC. BC founded a colony here. 89 BC Signia Municipium became , after which the abbreviation SPQS (Senatus Populusque Signinus) was used. In Roman antiquity, the city was a flourishing community in a strategic position above the Saccotal, but it was badly affected by the Gothic Wars in the 6th century. As a result, it became part of the Patrimony of Petri . In the 12th and 13th centuries it was the residence of popes several times. Sixtus V made it a duchy in 1585. In 1870 Segni became part of the Kingdom of Italy .

Stefano Corsi (Citizen List Impegno e Cambiamento per Segni ) was elected mayor in June 2009. He replaced Renato Cacciotti ( center-left alliance ) (since 2004), who was no longer a candidate.

A silver castle on a red shield, above a golden griffin , underneath the letters SPQS, surrounded by a tape with the motto “Signia Civitas prima romanorum colonia”.

The majority of the population of Segni belongs to the Roman Catholic Church. The diocese of Segni was founded in the 5th century and merged with the diocese of Velletri in 1981 . 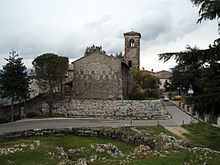 San Pietro with walls of the temple of Juno