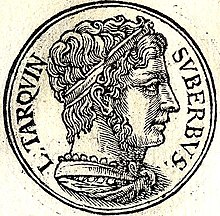 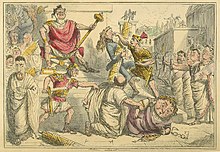 Tarquinius Superbus makes himself king in The Comic History of Rome , ca.1850

According to legend, Lucius Tarquinius Superbus († around 495 BC) came from the Tarquinian family and was the seventh and last king of Rome . He ruled from 534 BC. And according to tradition it was founded in 509 BC. Banished from Rome.

Tarquinius is one of the three Etruscan kings in Rome, whose historicity is doubted by some ancient historians , but is largely accepted by Etruscology , at least in its core. He is considered the grandson of the Roman king Tarquinius Priscus (616-578 BC) and succeeded his father-in-law Servius Tullius (578-534 BC) to the throne after Tullia , Tarquinius 'lover and Tullius' daughter, her father had murdered. Tarquinius, it is said, systematically switched off his domestic political opponents and all potential avenger for the murder of Tullius in Rome and reversed his predecessor's political reforms. In the later tradition he is so clearly portrayed as a typical tyrant that it is difficult to separate fact and fiction, even if one assumes that he goes back to a real historical figure.

In terms of foreign policy, Tarquinius allegedly pursued an extensive policy of expansion that extended the area of ​​the Roman city-state to Terracina . Construction work in Rome such as the expansion of the city wall, the (expansion) construction of sewers ( Cloaca Maxima ) or the construction of the temple of Jupiter on the Capitol were ascribed to him. In order to get the money for the wars and magnificent buildings, he allegedly had many rich nobles murdered - a typical accusation against tyrants.

Tarquinius went so far with the assassinations of nobles and other abuses of his power that the gods chose to show their anger in an omen. Therefore, a snake crawled out of a wooden column in the royal palace, which terrified the royal family. That omen worried even Tarquinius. He sent his two sons and his sister's son, Lucius Junius Brutus , to the oracle at Delphi. Tarquinius' sons considered their cousin to be limited. In order to avoid possible attacks by the king, Lucius Junius had deliberately hidden his intelligence behind a number of less intelligent actions, which had earned him the nickname Brutus ("fool", "idiot").

After the three had arrived in Delphi, they asked the oracle - in accordance with Tarquinius Superbus' order - about the meaning of the snake omen (the oracle's answer to this point is interestingly not even recorded in the sources), but add one more question on their own account, namely who (of them) will take over rulership in Rome after the death of their father. The oracle replied that the first to kiss the mother would be the next ruler of Rome. Tarquinius' sons believed that “mother” meant their biological mother, but Lucius Junius Brutus recognized that the oracle had spoken not of the physical mother, but of the common mother of all human beings, the earth. As they left the oracle, Lucius pretended to stumble from clumsiness, fell to the ground, and kissed the earth unnoticed.

According to the later sources around 510/09 BC, Tarquinius Superbus' tyrannical regime and an increasingly stronger opposition within the Roman patriciate led to it. BC (or 508/507 BC; the Roman tradition was based on the overthrow of the tyrant Hippias in Athens ) for the banishment of the king and his family from Rome, while the latter visited the Latin city ​​of Ardea (36th century ) as part of his expansion policy km south of Rome) besieged. The reason for the uprising was allegedly (Livy, from urbe condita 1.56–60) the rape of Lucretia by Tarquinius' son Sextus , which was regarded as further unmistakable evidence of the depravity of the royal family. The insurgents were led, as it is said, by Lucretia's husband Lucius Tarquinius Collatinus, who - as the second part of his name indicates - belonged to the royal family (in the broader sense), and his friend Lucius Junius Brutus.

In the eyes of the later Romans, the banishment of Tarquinius Superbus marked the end of royal rule in Rome and the beginning of the Roman Republic . According to the oracle, Lucius Junius Brutus and Lucius Tarquinius Collatinus became the first consuls of Rome. As already mentioned, it has been very controversial since the 19th century whether this legend conceals real historical events.

Tarquinius is said to have later tried to regain power in Rome with Etruscan and Latin help ( → Latin Wars ), but without success. It is said that after his overthrow over Gabii and Clusium he withdrew to the Etruscan Caere , where the Tarchna ("Tarquinii") family (as possible descendants of the king?) Is attested in the 3rd century BC .