The Otto-Friedrich-Universität Bamberg is a state university in Upper Franconia. Founded in the 17th century, it is one of the early modern universities in Europe. Its facilities are located at three locations in the city of Bamberg . Around 12,600 students were enrolled at the University of Bamberg in the 2019/20 winter semester. The student body thus makes up a good 15 percent of the city's population.

The university has had its current name since October 1st, 1988. It is reminiscent of the name Universitas Ottoniana Fridericiana used in the 18th century . This honors their founder Melchior Otto Voit von Salzburg and their sponsor Friedrich Karl von Schönborn .

Bamberg's Prince-Bishop Melchior Otto Voit of Salzburg laid the foundation stone for the University of Bamberg when, on November 14, 1647, the then Jesuit college , which was based on a cathedral school founded by Emperor Heinrich II. , Expanded the two faculties of philosophy and theology to form the Academia Bambergensis . Emperor Ferdinand III. and Pope Innocent X bestowed all academic privileges on the young university in the following year. In 1648 it was officially opened as Academia Ottoniana .

By 1770, Prince-Bishop Friedrich Karl von Schönborn added a law faculty to the university , making it a full university . The establishment of a medical faculty by Prince Bishop Adam Friedrich von Seinsheim made it a classic four-faculty university. In 1773 it was named Universitas Ottoniano-Fridericiana . In 1803 the four-faculty university was abolished again in the course of the secularization of the Bamberg monastery .

Continuation of the studies after 1803

However, the theological-philosophical studies could also be continued after 1803. The two faculties of theology and philosophy continued to exist as a lyceum . The medical faculty had to stop teaching in October 1809 and was initially replaced by a "rural medical school" which trained "rural doctors" under the supervision of a regional court doctor until 1823, by a school for surgeons and in 1836 by a bathing school that existed until 1841 .

In 1923 a Philosophical-Theological University (PTH) was founded. During the Nazi era it had to close on October 9, 1939. The military government in the American Occupation Zone approved the reopening on October 10, 1945. So six months after the Second World War, teaching continued, primarily in law , natural sciences and pharmacy . Nevertheless, it was limited to a philosophy-theological college. As a result, subjects that were not part of the profile of the university were abolished. It remained the philosophy , the theology and chair of art history , but in a chair for lack of student numbers pastoral theology should be rezoned.

In 1958, the state government in Bamberg founded a college of education (PH) with a Catholic orientation, which was independent under the umbrella of the University of Würzburg and trained primary and secondary school teachers. Important professors were the theologian Michael Arneth , the pedagogue Reinhold Ortner and the folklorist Elisabeth Roth .

In 1979 this was converted into the University of Bamberg . Previously, the comprehensive university had given itself a new structure, three faculties had been founded.

Structure of the new university in 1979:

In 2015, the University Council decided on the 2020 development perspective . It shows the direction of strategic development that the university intends to take, including with regard to research focuses and networks, quality assurance for doctorates and the promotion of young talent, further development of teaching, infrastructure and administration as well as internationalization.

In accordance with its statutes, the University of Bamberg is managed by a president, three vice-presidents with various departments and a chancellor .

The university management includes (as of February 2019):

Together with the deans of the four faculties, these five people form the extended university management of the University of Bamberg.

The old slaughterhouse is now used by the Institute for Geography (Am Kranen 1). 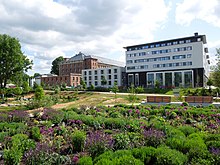 Entrance area at Feldkirchenstrasse 21 at the 2016 Sociology Congress

The university has consisted of four faculties since 2007:

Institutes of the Faculty of Humanities and Cultural Studies

Subjects of the Faculty of Social and Economic Sciences

Institutes of the Faculty of Human Sciences

Subjects of the Faculty of Information Systems and Applied Computer Science

The former Burgershof is now a central point of the university in the old town (An der Universität 9).

The range of courses includes 28 Bachelor and 57 Master’s programs as well as teaching programs from elementary school to grammar school (as of March 2018).

The following courses are offered:

Professionally qualified people can, under certain conditions, study at the University of Bamberg without a high school diploma. Almost all courses at the Otto-Friedrich-Universität Bamberg can be studied part-time .

Research focus at the University of Bamberg:

The German Research Foundation (DFG) funds the following programs at the University of Bamberg:

The Rotenhan-Palais houses parts of the university administration, including the student chancellery and the international office (Kapuzinerstraße 25).

Many of the university's facilities are located in historic buildings in the old town and are part of the UNESCO World Heritage Old Town of Bamberg . The institutes of the Faculty of Humanities and Cultural Studies and parts of the university administration are located in the former Jesuit college, the former wedding house , the former slaughterhouse, the former building yard and the former fire station . The Faculty of Human Sciences is located in the former women's clinic on St. Mark's Square ( Marcushaus ), the birthplace of Thomas Gottschalk . New lecture halls and institute buildings have recently been built in the adjacent Markusstrasse.

The Faculty of Social and Economic Sciences is located on Feldkirchenstraße (popularly known as Feki ), on Kärntenstraße and on Kirschäckerstraße. The central library of the Bamberg University Library and the university's computer center are also located in Feldkirchenstrasse . In 2012, the university was expanded to include a new building: the Faculty of Business Informatics and Applied Computer Science and the Institute for Communication Science moved to the site of the former Erlangen-Bamberg cotton spinning mill at the northern end of the island town, commonly known as the Erba . Around 300 student apartments were built in the immediate vicinity in a brick building that was formerly used for industrial purposes.

An honorary doctorate from the University of Bamberg is Heinrich Bedford-Strohm , regional bishop of the Evangelical Lutheran Church in Bavaria and Chairman of the Council of the Evangelical Church in Germany. Herbert Brücker, Professor of Economics at the University of Bamberg since 2008, has headed the Research Department Migration, Integration and International Labor Market Research at the Institute for Labor Market and Occupational Research (IAB) in Nuremberg since 2005 .