“Large spatial curve” by the sculptor Norbert Kricke on the campus

The University of Bayreuth is one of the youngest universities in Germany . Since it opened in 1975, the research-oriented campus university with its seven faculties has developed dynamically.

“Postei” in Friedrichstrasse , building of the former Academia Fridericiana 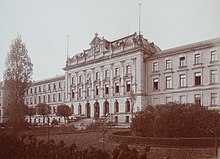 The margravial Academia Fridericiana (Friedrichsakademie), which existed in Bayreuth from 1742 to 1743 and was given the status of a university by Charles VII on February 21, 1743 , has no historical connection with today's University of Bayreuth. Rather, it was the short-lived forerunner of the Friedrich-Alexander-Universität Erlangen-Nürnberg .

Foundation of the university

On November 5, 1969, the Bayreuth city council dealt with the economic stagnation and emigration tendencies in northeast Bavaria as a result of its location near the borders with the GDR and Czechoslovakia . In order to initiate an effective structural improvement that would guarantee living conditions of equal quality with the rest of the country, various measures were required. In this context, he unanimously applied for the establishment of a university in the city. On March 19, 1970, a university association was launched, the number of members quickly growing to 800. In addition to Bayreuth, Bamberg , Coburg , Landshut , Passau and Ingolstadt also applied as locations for a university or college.

Members of all parties represented in the Bavarian state parliament, the Upper Franconian District Parliament and numerous public figures campaigned for the building of the university. Special mention should be made of Konrad Pöhner and Simon Nüssel as well as the Mayor of Bayreuth Hans Walter Wild , who showed great negotiating skills. As early as July 16, 1970, a state parliament resolution was reached according to which the next Bavarian state university should be located in Bayreuth. In 1971, the Science Council recommended that the university be included in the measures under the University Building Promotion Act . A structural advisory board was formed under the chairmanship of the physicist Wolfgang Wild , which expected the number of 8500 study places and 3200 employees in 1985.

The university was founded by the Bavarian State Parliament on January 1, 1972 as the seventh Bavarian state university. The state parliament decision was celebrated on December 14, 1971 in the city with a torchlight procession. Instead of the Wendelhöfen and Roter Hügel locations that were also being considered, the site of the former parade ground south of the Kreuzstein and Birken districts was chosen. The office of the University of Bayreuth began its work in 1972, initially in the House of German Shorthand (“Stenohaus”) on Luitpoldplatz, which was built by the National Socialists. Founding President Klaus Dieter Wolff took office in October 1973 . The foundation stone was laid on March 23, 1974, and on November 27, 1975, Minister of Culture Hans Maier opened the University of Bayreuth with a state ceremony in the Margravial Opera House with a focus on natural sciences.

The first building on campus was the Geosciences I building west of the “Birkengut” farm, completed in 1975, which was initially used by the university, but was demolished in 1994 after a fire. The Geosciences II building was added in 1977, and Natural Sciences II was built from 1980 to 1983. In 1988 the university library, which until then had been housed in a temporary facility, was inaugurated and the foundation of the Humanities II building, which cost 8.6 million DM, was concreted. On January 5th of that year, the physicists Frank Pobell , Kurt Gloos and Peter Smeibidl set a new record for low temperatures after a four-year preparation period. In 1994 the university administration was moved from Kanalstrasse in the city center (former “Steno-Haus”) to the campus. In the same year the Auditorium Maximum with a capacity of 700 seats was completed, in 1999 the building for the Faculty of Applied Sciences (FAN), founded in 1998.

On the basis of the recommendations of your structural advisory board, areas of focus and courses with a special interdisciplinary focus were determined:

In addition to the focus, it was the “interface philosophy” that proved to be particularly effective for the further development of the university. It includes carrying out seminal scientific teaching and research at the points of contact and intersection of different disciplines. On this basis, interdisciplinarity in almost all areas was a particularly typical feature of Bayreuth from the start.

In connection with the expansion of the ecological focus, the University of Bayreuth was able to start setting up a large-scale ecological-botanical garden to support research and teaching shortly after the start of operations , in which vegetation types from all over the world were to be reproduced and profile-relevant research activities were to be made possible. At the same time, the concept encompassed the novel aspect of the public and the recreational value for the region.

In the summer of 1977, the Research Institute for Music Theater in Thurnau Castle began its work. On November 27, 1981, the “ Iwalewahaus ” Africa Center was opened in the building of the former margravial mint .

The first graduate college was set up in Bavaria in 1987 under the name “Plant Herbivore Systems” .

At the end of the decade, the university significantly expanded its profile by expanding its four main research areas to nine and introducing the bachelor's and master's system in the 1999/2000 winter semester as part of the European course reforms ( Bologna process ). The priorities were reformulated as follows:

The increasing scientific competition has recently shown itself, among other things, in the emerging standards and certifications in the area of accreditations and rankings . Allocations of third-party funds became more and more important and made it possible to expand research and study opportunities through new institutions and types of institutions as well as through more extensive global networking.

The current profile is characterized by a differentiation into internationally visible research fields, which are characterized by a high degree of thematic and programmatic coherence ("Advanced Fields"), and into new interdisciplinary research priorities, which are in the early stages of a dynamic development identified as sustainable by responding to a virulent and socially relevant research need (“emerging fields”). The "Advanced Fields" consist of:

The "emerging fields" include:

When it started teaching in 1975, the university was designed for up to 8,000 students in the final state. The number of 13,000 was exceeded in the 2014/15 winter semester. The continual growth was responded to with a personnel and infrastructure expansion.

In September 2018, the Bavarian Minister of Science Marion Kiechle opened the Bavarian Center for Battery Technology (BayBatt) at the University of Bayreuth. It is to be set up within five years and in the final stage will include 114 positions, including 12 professorships.

The University of Bayreuth has a basic structure , in the preamble of which the interdisciplinarity , internationality and the targeted setting of priorities are formulated as a model.

Art and culture on campus

Stele and rusty head on the main auditorium

One of the characters by Stephan Balkenhol

There are 32 publicly accessible works of art exhibited in the open air on campus (as of 2017). Among the best known are the “Great Space Curve” by Norbert Kricke , the rusty head across from the Audimax by Wolfgang Bier , the stainless steel work by Erich Hauser in the inner courtyard of Building NW II and the figures by Stephan Balkenhol distributed around the roundabout . A new addition in 2017 was Robert Kessler's two-mirror work “you are free”.

The Uni-Open-Air music festival has been held on the campus every year in early summer since 1988. The one-day event, which is organized by students, brings rock , indie rock and punk to a stage in the inner courtyard of the NW II building. Sportfreunde Stiller (2000), Tomte (2001), Robocop Kraus (2009) and Vierkanttretlager performed (2014).

A former greenhouse is the “Glashaus” venue, which is run by students and university staff on a voluntary basis. Since 1997 the non-profit association Glashaus eV has been the sponsor of the facility. In 2018, the glass house was awarded the Germany-wide applause program prize for outstanding live music programs.

The first chancellor from 1973 to October 1999 was Wolf-Peter Hentschel, who had already headed the university's office from January 1, 1972. Ekkehard Beck was from November 1999 to 2010 and Markus Zanner has been Chancellor of the University of Bayreuth since 2011 .

In addition to the external members are through university elections

In front of the Faculty of Law and Economics

There are seven faculties :

The university library is divided into the following library locations:

The university is designed for around 10,000 students. Many courses are designed to be interdisciplinary, e. B. Philosophy & Economics, International Economics and Development, Health Economics, Sports Economics, Sports Technology, Polymer and Colloid Chemistry, Geoecology (environmental science), Global Change Ecology or Applied Computer Science. The University of Bayreuth is a member of MedienCampus Bayern , the umbrella organization for media education and training in Bavaria.

In front of the Humanities I building

University campus, in the background the Science II building

Institutions in cooperation with the DFG

The SFB / FK 560: Local Action in Africa in the Context of Global Influences and the SFB 466: Lymphoproliferation and Viral Immunodeficiency (in cooperation with the University of Erlangen-Nuremberg) were ended in 2007.

Project groups in cooperation with the Fraunhofer Society

Project groups in cooperation with the Volkswagen Foundation

Further facilities in connection with the University of Bayreuth

As part of the excellence initiative of the federal government and the federal states, the university offers a graduate school on Africa research with the “Bayreuth International Graduate School of African Studies” (BIGSAS) .

In cooperation with the Bavarian Elite Network, the University of Bayreuth is also involved in the following graduate schools:

In 2016 there were 323 professorships at the university, 45 of which were occupied by women. At 52 percent, the proportion of women in language and literature studies is highest. In the field of cultural studies it is 33 percent, in the faculty of mathematics, physics and computer science it is 9.8 percent. In law and economics, it is 7 percent. The proportion of female professors is thus below the Bavarian average of 19 percent.

In contrast to some other universities, alumni work at the university is not organized centrally (i.e. at the university-wide level and from the university management or administration), but decentralized. The existing alumni structures are based on initiatives by former students and are divided according to faculties, courses or areas of study. The following institutions are partly registered associations and partly less formal structures (networks):

An international alumni work by a. in the field of interdisciplinary African studies and intercultural German studies has been funded by the German Academic Exchange Service since 2009. Representatives of the alumni organizations belong to an alumni forum that is headed by the Vice President for International Affairs and External Relations of the UBT.