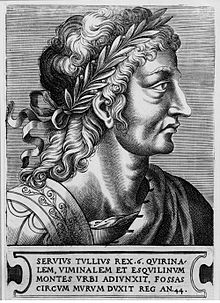 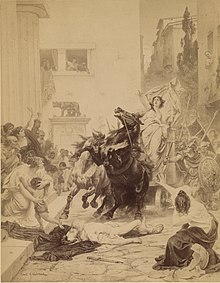 Ernst Hildebrand : Tullia drives her team over her dying father in front of the Capitol (1886)

According to legend, Servius Tullius († around 534 BC) was the sixth king of Rome . Its mere existence is usually not denied by specialist science, although there is hardly any reliable historical information about it, especially since some sources contradict one another. The dating of his lifetime is also doubtful. However, it is unanimously reported that he was later considered the most popular of all Roman kings.

Servius Tullius was after Livius the son of a nobleman from the Sabine city ​​of Corniculum , whose father had died in the battle against Rome. He and his mother Ocresia were brought to Rome as prisoners of King Tarquinius Priscus , where they were treated according to their status. But since her son was born in slavery , Ocresia called him in folk etymological derivation from the Latin servus = slave Servius . According to the same legend, a flame appeared above the head of the youthful Servius Tullius, which the king's wife, the Etruscan Tanaquil , interpreted as a sign of his future rule. Servius was married to the king's eldest daughter, and it was Tanaquil who, after the assassination of Tarquinius Priscus - allegedly in 578 BC. BC - made possible the accession of Servius Tullius to the throne through cunning.

According to another traditional version, which comes from Emperor Claudius , who studied the history of the Etruscans and was found on a bronze plaque in Lyon , Servius Tullius was originally an Etruscan from Vulci named Macstarna . According to this story, the Roman hill would be called Caelius after his friend Caelius Vibenna. Both names can be found in the paintings of the Tomba François in the necropolis of Vulci, which depicts Macstarna freeing his friend who had fallen into the hands of the enemy, while his comrades in combat slaughter these enemies, including a Cneve Tarchunies Rumach, Gnaeus Tarquinius from Rome .

Servius Tullius is said to have been very concerned about the welfare of the state. Allegedly, he divided the Roman people into five classes with 193 centuria , with the previously incapable of voting the lower class and the rich patricians the upper class. The top two classes, however, claimed 100 centuries for themselves, half for young and old men, whereby the young (17 to 45 year olds) were obliged to do military service and the old ones were supposed to defend the city. This classification regulated the military equipment required for war missions . The poor who had no possessions, the proletarians , formed only a single centurion as the sixth class and were exempt from military service, while the rich provided cavalry and heavily armed men. The classes in between made up the various lightly armed men. In this context, Servius Tullius is said to have introduced the census , with which the assets and employment of all Roman citizens were regularly recorded. In a census, the censor even (allegedly) counted 80,000 inhabitants. The oldest Roman city wall, the so-called Servian Wall , is said to have been built under his government. After Livy he expanded the city to include Quirinal and Viminal and built himself an apartment on the Esquiline . He is also said to have introduced the cult of Diana in Rome.

In the 44th year of his reign he is said to have been overthrown and murdered while fleeing home. This is said to have instigated his daughter Tullia the Younger , who wanted to bring her husband Lucius Tarquinius Superbus to the throne at all costs . Servius Tullius' body was allegedly even run over by his daughter's car, which in later Roman tradition was considered an example of an offense against the father.