Eugene III. was the first Cistercian Pope . Its exact origin is uncertain, contemporary sources only give “natione Pisanus”. Later scholars and historians have constructed the descent from a family Paganelli di Montemagno . However, there is no actual evidence for this.

Eugene III. is rightly called a pupil of Bernhard von Clairvaux , although his influence is judged differently. Before Bernard's entry into Clairvaux Bernardo Paganelli had long been a monk, 1115 Paganelli entered the Camaldulenserkloster a St. Zenon, 1128 he became prior. 1135-1137 he was a canon in Pisa , occurred in 1138 in Clairvaux, but was already in 1145 Dept. of Tre Fontane Cistercian Abbey at the gates of Rome.

Paganelli was not a bishop and certainly not a cardinal , but was nevertheless elected Pope on February 15, 1145. A few days later he had to flee Rome for the first time because the Roman Senate was hostile to papal rule. As a result, he was also unable to counter the agitations of his opponent Arnold von Brescia , who demanded that the church renounce power. Since Eugene had to flee from Rome several times, he only spent a small part of his pontificate there . 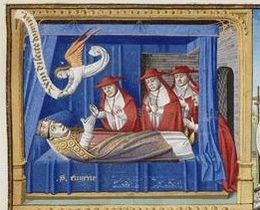 The death of Eugen III. in a French translation of the Speculum Historiale des Vinzenz von Beauvais , 15th century (Ms. 722, fol.296r, of the Musée Condé )

As a reaction to the fall of Edessa , which was captured on December 25, 1144 by Emir Zengi of Mosul and Aleppo , Eugene III called. on December 1, 1145 with the bull " Quantum praedecessores " to the Second Crusade . This came about, however, when Bernhard von Clairvaux as crusade preacher in 1146 King Ludwig VII of France and also the Roman-German King Konrad III. for this company. The Second Crusade ultimately failed miserably.

Eugene III. also allowed the Saxon nobles a crusade against the pagan turns . On April 27, 1147, at the Council of Paris , he granted the Knights of the Templars the right to wear a red cross on the left shoulder of their white cloak, so that their habit differed from that of the Cistercians.

A few months before his death, Eugene III. on March 23, 1153 with King Friedrich Barbarossa the Treaty of Constance , which should secure him the support of the king against the rebellious Romans. In July of the same year, Eugene died before Barbarossa could move to Rome with his army.

From Pope Pius IX. Confirmed as Blessed on September 28, 1872 , his Catholic feast day is July 8, the anniversary of his death.