The urban neurotic (original title: Annie Hall ) is an American film by and with Woody Allen from 1977 .

Alvy Singer is a successful comedian, intellectually influenced, Jew and a rather neurotic guy who regularly messes with women. He meets Annie Hall, falls in love with her and meets a neurotic counterpart in her. Ups and downs alternate in their relationship, in which they trump each other with their psychoanalytic wisdom. Alvy loses Annie too, and even takes a trip to the hated California to win her back.

The specialty of the film is its temporal flexibility. He begins with Woody Allen as Alvy Singer addressing the cinema audience directly, only to travel back to different phases of his biography and only at the end to conclude the film again in the present time. Several relationships between the main character are touched upon, and the mere mention of a name can lead to a leap in time. The film travels through more than two dozen time levels, which is held together by the dialogues and the focus on the relationship problems of its main character. The central relationship appears to be that to Annie Hall (Diane Keaton), which, however, is not presented to the audience in chronological order, but also in leaps and bounds in episodes.

Allen uses a variety of means to clarify the state of his protagonist; For example, there is a short animated film sequence or family meal caricatures in the split-screen process . The scene in which he sits as an adult in his old school class is often copied and the thought “I sometimes wonder what happened to my classmates” leads to individual pupils stepping out of the scene and showing their further biography in the camera tell.

So this film is not so much a factually correct processing of events as it is a cinematic version of a chain of thought. Reality, thought games, transfigured memories and thought leaps merge seamlessly into one another; the film does not explicitly identify them as such.

“Woody Allen's strongly autobiographical comedy shows an intellectual clown who struggles with deadly serious problems, but can ultimately only be funny; it describes the path of a dreamer and born loser, who in the end nevertheless ensures his survival through the power of his own creativity. The erratic series of gags of earlier Allen films has given way to a more balanced story, in which pointed irony largely displaces slapstick. Woody Allen proves to be an extremely accomplished director who playfully juggles different styles and narrative forms. A classic of modern film comedy [...]. "

The German dubbing was created in 1977 under the dubbing direction of John Pauls-Harding .

The term urban neurotic has meanwhile entered common usage and mainly refers to residents of large cities who are characterized by special quirks that are allegedly due to urban stress.

Eckhard Henscheid , co-translator of the published original script, considers the title Der Stadtneurotiker “a misunderstanding up to and including flagrant nonsense”, because the term initially means everything and nothing, the setting Manhattan is more of a cosmopolitan city and even in the film it does not about a neurotic. Henscheid also notes critically that most of the linguistic jokes in the film in the German version did not come from Allen and Brickman, but rather were put into the mouths of the actors through the synchronization. 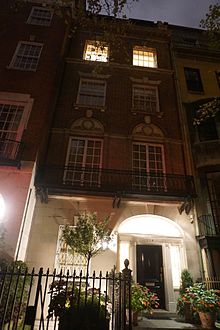 What's Up, Tiger Lily? | Woody, the unlucky fellow | Bananas | Do it again, Sam | Everything you always wanted to know about sex but never dared to ask | The sleeper | Boris Grushenko's last night | The urban neurotic | Inner workings | Manhattan | Stardust Memories | A summer night sex comedy | Zelig | Broadway Danny Rose | The Purple Rose of Cairo | Hannah and her sisters | Radio Days | September | Another woman | New York Stories | Crime and other trifles | Alice | Shadow and fog | Husbands and wives | Manhattan Murder Mystery | Bullets Over Broadway | Beloved Aphrodite | Everyone says: I love you | Harry beside himself | Celebrity - beautiful. Rich. Famous. | Sweet and Lowdown | Narrow gauge crooks | Under the spell of the Jade Scorpio | Hollywood Ending | Anything Else | Melinda and Melinda | Match Point | Scoop - the hit | Cassandra's dream | Vicky Cristina Barcelona | Whatever Works - love yourself who can | I see the man of your dreams | Midnight in Paris | To Rome With Love | Blue Jasmine | Magic in the Moonlight | Irrational Man | Café Society | Wonder Wheel | A Rainy Day in New York