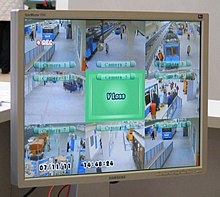 Split-screen or split screen (literally "split screen") is a technique used in visual media that the image on the screen ( Engl. Screen splits) into two (or more) areas (Engl. Splits ) to two or more acts or To show pictures at the same time.

In the film was the split screen , especially in the 1960s and 1970s, a very popular technique, the method itself is already in the 1920s by Abel Gance in his monumental movie Napoleon was applied (1927). The pioneer in the 1960s was the American artist Andy Warhol in his feature film The Chelsea Girls (1966); Another famous example is the Woodstock film by Michael Wadleigh (1970). The most famous mainstream film of this era is Thomas Crown Unbelievable (1968). One of the most prominent examples of the 1970s is Brian De Palma , where the split screen became a trademark and frequent stylistic device in his films.

The display is mostly split vertically, for example to show two people on the phone at the same time. The effect is similar to that of parallel montage , but looks a lot more artificial. In Dr. Jekyll and Mr. Hyde (1931), on the other hand, the picture is divided diagonally and symbolizes Jekyll's split personality.

Split screens , which consist of several elements of different sizes, are among others. a. to see in:

Duovison describes a process that was used in some US films in the context of New Hollywood in the 1970s , for example Wicked, Wicked from 1973.

A few films were shot completely with split image in duo. Most duovision films only have a few scenes in duovision. In some cases, the duo-season scenes were cut out on video or DVD in new editions, or only one image was used.

In interviews or discussions in which the participants are in different places, they are partially cut together in one picture.

The split screen is being used more recently in live sports broadcasts; The so-called split-screen advertising used here shows for the most part the commercials, while the sports program is still shown in one corner.

In computer games, the split screen is used as a solution to allow several players to play simultaneously on one device and one screen in multiplayer mode and yet to provide everyone with their own playing field in which they can act and whose perspective they can see independently of others Can affect players.

The screen is separated depending on the format of the screen. With 5: 4 and 4: 3 devices there is a horizontal division, with 16:10 and 16: 9 usually a vertical division. Each half of the screen is assigned to one player, but both players play the same game.

This technique is very widespread in the console sector, especially in first-person shooters and racing games.

Another variant is used to divide the screen for a single player into two completely different areas, for example a colored area in single-point graphics with the actual game world and one in text mode , which is only used to display scores and other status information. With a suitable implementation (for example, a raster line or the Copper of the Amiga ), the second region may have a completely different, simpler graphics mode have, he fewer resources of space and time consuming, requires less time update writing and thereby works simply faster.

The prime example of a narrative use of the split-screen method in PC and video games is the critically acclaimed Fahrenheit game . The player controls his character in one of the windows while at the same time observing the actions of other characters. As in TV series 24 , the method is mainly used to generate voltage. For example, the player has to flee from a building complex and at the same time sees a police officer approaching the protagonist's apartment.

Some monitors, for example televisions, but particularly surveillance monitors, offer the possibility of simultaneously displaying different continuously updated sources or sequentially showing the channels of a receiver. Here, the division is usually done in a square format with the same aspect ratio , for example 2 × 2 4: 3 images on a 4: 3 display or 3 × 3 16: 9 images on a 16: 9 device. More than 25 (5 × 5) or a maximum of 36 (6 × 6) images at the same time are not useful. If the aspect ratio of the signals and the display device differ, non-square divisions are also possible, for example 4 × 3 4: 3 images on a 16: 9 device or 3 × 4 16: 9 images on a 4: 3 device . Asymmetrical division is also possible, for example a large 4: 3 picture (2/3 width) next to three small ones one above the other (1/3 width) in a 16: 9 frame. 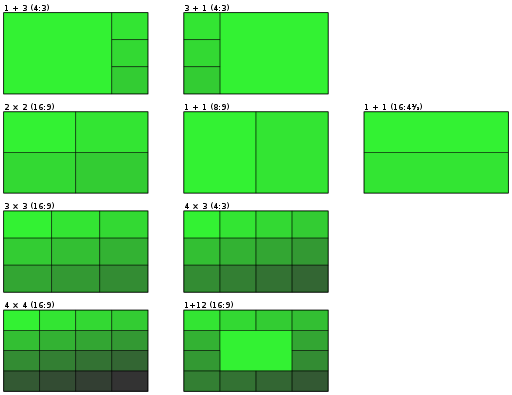