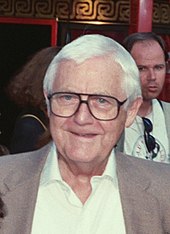 Robert Wise at the 1990 premiere of the film Air America

Robert Wise worked as a film editor for RKO Pictures in Hollywood , including Orson Welles ' Citizen Kane and The Shine of the House of Amberson . From the mid-1940s he was entrusted with his first directorial assignments. Through the films The Curse of the Cat People and Der Leichendieb (the latter with the two then horror stars Bela Lugosi and Boris Karloff ) he became an important protagonist of the horror film at an early age . He also made contributions to film noir ( The Set-Up , 1949) and science fiction - genre ( The Day the Earth Stood Still , 1951).

Wise became famous in the 1950s and 1960s with the drama Let Me Live , the musical West Side Story and the horror film Until the Blood Freezes . His biggest commercial success was My songs - my dreams from 1965. Related articles science fiction genre provided Wise with Andromeda - Lethal dust from outer space (1971) and the first Star Trek -Kinofilm Star Trek: The Motion Picture ( 1979).

In 1967 Robert Wise received the Irving G. Thalberg Memorial Award from the Academy of Motion Picture Arts and Sciences (AMPAS) for his life's work , after receiving an Oscar for Best Director in 1962 for West Side Story and 1966 for Meine Lieder - mein Träume had been. In 1998, Robert Wise received the AFI Life Achievement Award from the American Film Institute , the highest distinction for a filmmaker's oeuvre.

Wise was President of the Directors Guild of America from 1971 to 1975 and President of AMPAS from 1985 to 1988. In this capacity, he accepted the award for actor Paul Newman in 1987 because he was unable to attend the ceremony.

Wise died of heart failure on September 14, 2005 shortly after his 91st birthday.

Commons : Robert Wise  - collection of images, videos and audio files
President of the Academy of Motion Picture Arts and Sciences

President of the Directors Guild of America