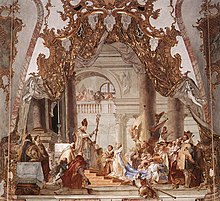 Marriage of Frederick I with Beatrix of Burgundy, Giovanni Battista Tiepolo , 1751

Eastern Europe and the Caucasus

In Venice is Montevecchio , founded an association of creditors , as the first banking institution of the West makes history.