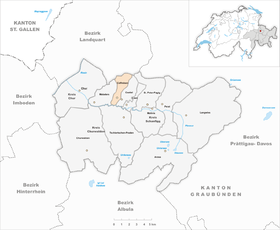 Calfreisen ( Rhaeto-Romanic Chiaunreis ? / I ) was a political municipality in the former Schanfigg district in the Plessur district of the canton of Graubünden in Switzerland until December 31, 2012 .

On January 1, 2013, it merged with the municipalities of Castiel , Langwies , Lüen , Molinis , Peist and St. Peter-Pagig to form the municipality of Arosa .

Blazon : In gold (yellow) one of blue and silver (white) geschachter oblique beams .

Calfreisen is located in Schanfigg , five kilometers (as the crow flies) east of Chur . The rural village extends on a slope on the rugged northern side of the valley, a good 500 m above the Plessur and 130 m above the Schanfiggerstrasse . The former municipal area comprises a narrow strip between the deeply cut gorges of Calfreiser Tobel in the west and Castieler Tobel in the east; it extends from the course of the river up to the Hochwangkette , which forms the northern border of the territory from the Montalin ( 2266  m ) over the Ful mountain (2395 m). On the ridge between Ful Berg and Hochwang, the highest point in the former municipality is reached at 2429 m.

Of the entire former municipal area of ​​517 hectares, 256 hectares are used for agricultural purposes (mostly alpine farms), 155 hectares of forest and wood, 97 hectares of unproductive area (mostly mountains) and 9 hectares of settlement area.

The place mentioned in 1156 as Caureisene belonged in the three leagues to the Ausserschanfigg court of the ten-court league.

Until the 16th century, the residents of the community spoke Romansh . Since then, Calfreisen has belonged to the German-speaking area. The table below illustrates this:

Calfreisen is one of those former communities in the canton of Graubünden that accepted the new (evangelical-reformed) teaching. In 2000 there were 93% Evangelical Reformed and 2% Roman Catholic Christians. 5% of the residents did not provide any information about their creed.

Of the 51 residents at the end of 2004, 46 are Swiss citizens. At the last census, 89% were Swiss nationals. The few immigrants all came from Germany.

Agriculture still dominates in Calfreisen. There are no larger businesses, village shops or inns.

The former municipality is connected to the public transport network with the Calfreisen junction of the Chur – Peist post bus line . Individual courses go to the village by appointment.

The ruins of Bernegg Castle lie on a promontory on the southern outskirts .

Panorama picture, taken on May 23, 2008 above the village. On the southern edge of the village, the ruins of Bernegg Castle . Further into the valley the church of Castiel . On the opposite side of the valley the Arosa Mountains and on the mountain flanks of the Gürgaletsch the villages Tschiertschen and Praden .

Political communities in the Plessur region