Historical map of the three leagues

The Drei Bünde , in Romansh La Republica da las Trais Lias also Republica for short, were a free state in the area of ​​today's Swiss canton of Graubünden without Haldenstein and Tarasp , which arose in the 14th and 15th centuries as a contractual amalgamation of various high courts or judicial communities that remained sovereign. These republics were to 1798 contractually outward one facing site of the Old Confederacy .

The three states were:

Coat of arms of the church association. Interestingly, the Alpine ibex depicted was already extinct on the territory of the Church of God in the middle of the 17th century.

The Gotteshausbund was posted on January 29, 1367 in Chur closed with the aim of a creeping takeover of the Chur diocese by the House of Habsburg to prevent. With this, the episcopal subjects, the so-called house of God , reacted to the attempt by Bishop Peter Jelito to transfer all of his possessions to Habsburg in return for a pension. The document was signed by delegates from the cathedral chapter , the episcopal ministerials , the city of Chur and the episcopal courts of Domleschg , Schams , Oberhalbstein , Upper Engadin , Lower Engadin and Bergell . Later, other courts joined, for example, in 1408 the Puschlav and in 1450 the four villages . Lower Engadine, Münstertal and Upper Vinschgau were long disputed between the County of Tyrol and the Diocese of Chur. While the first two were able to shake off the rule of the Habsburgs as Counts of Tyrol, in 1618 the Untercalven court, the last part of the Vinschgau, was excluded from the church federation . The city of Chur was the main town of the Church of God. 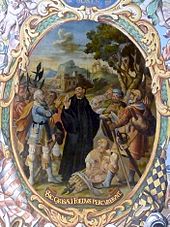 The Upper covenant Grauer Bund (Romansh Ligia / Lia Grischa , rare La Grischa or Lia Sura ), called created in response to numerous feuds and turf wars between the aristocratic families Belmont , Sax-Misox , Rhäzüns , Vaz , Werdenberg , the Disentis Abbey and the Bishop of Chur . The alliance ensured peace in the country, especially with regard to the route over the Lukmanier Pass .

In 1424, alliances between individual nobles and their subjects in Trun , which had existed since 1395, were extended for ever as the Upper or Gray League. The highest office of the federation was that of the land judge (written in Romansh as "Landrehter"), who was re-elected every two years. The coats of arms of the 72 district judges of the Gray League are recorded in the district judges' hall of Cuort Ligia Grischa .

On March 16, 1424, the abbot and the court of Disentis , Baron Hans Brun von Rhäzüns for himself, his rule Rhäzüns and the communities of Safien , Tenna and Obersaxen , Hans von Sax-Misox for himself swore the covenant in Trun under the maple of Trun and the courts of Ilanz , Gruob , Lugnez , Vals , Castrisch and Flims , the Count of Werdenberg-Heiligenberg with all his subjects as well as the courts of Trins and Tamins , the Free of Laax and the communities in the Rheinwald and in Schams . Before 1440, the lords of Löwenberg , Thusis , Tschappina and Heinzenberg joined, which the Count von Werdenberg-Sargans had originally forbidden from joining. In 1441 the Cazis monastery joined, in 1480 the neighborhoods Mesocco and Soazza in Misox and in 1496 the last count of Misox, Gian Giacomo Trivulzio , with the courts of Misox and Calanca . The main town of the Gray League was Ilanz. In 1778 the union was renewed for the last time, in 1798 it went under as part of the old Free State of the Three Leagues.

After the Counts of Toggenburg died out , their subjects formed a union in what is now Graubünden on June 8, 1436, which provided for mutual help and eternal inseparation of the participants. The ten courts of Belfort , Davos , Klosters , Castels , Schiers , Schanfigg (St. Peter), Langwies , Strassberg ( Churwalden ), Maienfeld (town and castle) and Neu-Aspermont (high jurisdiction over Jenins and Malans ) were involved. The main town of the federal government was Davos. This alliance, too, was mainly directed against the expansion of the Habsburgs into Graubünden.

On the 2160  m above sea level. M. high Dreibündenstein , in the alpine area of the municipalities Domat / Ems , Domleschg and Malix , the common border point of three Raetian frets is. The boundary stone from 1722 is now in the Rhaetian Museum in Chur. In 1915, the Rätia section of the Swiss Alpine Club replaced it with a two-meter-high obelisk. The map from 1768 shows the border point: in the west the Obere or Graue and, in the south the Gotteshausbund, in the east the Ten Court League and in the north the Freiherrschaft Haldenstein .

Other areas and subjects

The Freiherrschaft Haldenstein and Tarasp did not belong to the three leagues . The rulers of the rule of Rhäzüns had been the Habsburgs since 1497, but the Rhäzüns court remained in the Gray League.

Since 1497/98 the Three Leagues were as -facing locations with the Confederation connected. In the wars of Milan in 1512, Worms ( Bormio ), Valtellina (Valtellina) and the county of Cleven ( Chiavenna : Val San Giacomo and Valchiavenna ) were conquered as common subject areas. These valleys were lost again in 1797 and are now part of Italy. A special case was the Bündner Herrschaft , which was acquired by the Three Leagues in 1509 as another common rule. The membership of the Maienfeld and Neu-Aspermont courts in the ten-court federation remained, so that the residents were both subjects and masters of themselves.

Division of the three frets into high courts
→ Main article : History of the Canton of Graubünden 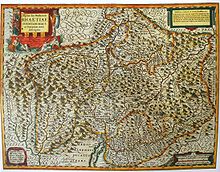 Map of the Three Leagues by Fortunat Speaker

The three unions, closed in 1367, 1424 and 1436, initially worked together informally, for example in 1450 in the shame feud . Joint meetings of messengers from all three groups have been documented since 1461. The closer merger is said to have taken place in 1471 in Vazerol, a hamlet in the municipality of Brienz / Brinzauls ; however, there is no explicit documentary evidence of this. The alliance of the Gray League with the Ten Courts League took place in 1471. After the factual separation of the Rhaetian Free State from the Holy Roman Empire in 1499 , it developed in the 16th century into a political entity that was unique in early modern Europe. In the early 17th century, it was the only territorial state in Europe that made communalism the sole justification principle. The Bünder communities founded, governed and defended their Free State based on the principle of the commune as a cooperative. In 1512, the Ten Court League, the Gray League, and the Free City of Chur each received a valuable “ Julius banner ” from Pope Julius II for the services they performed in the “Great Pavier Campaign” from 1508–1510 to expel the French.

With the federal letter of September 23, 1524, the constitution that was valid until the dissolution of the Free State was created. The highest power in the state was the Bundestag , in Romansh “Dieta da las Lias”, which was composed of 63 members, Romansh “Mess” (messengers) from the judicial communities “Dretgira” and the three heads of the Three Leagues. The executive branch consisted of the Small Council “Congress pitschen” and the Grand Council “Congress grond”. The three heads of the leagues formed the small council. The big council consisted of the small council plus 3–5 members per federal government. The Bundestag took place alternately in Ilanz, Chur and Davos. By today's standards, the three leagues are more like a federation of states than a federal state : the state as a whole had few powers, and practically all state matters were decided by the judicial communities “by referendum”.

When the Federation was founded, the majority of the area covered by the Ten Court was already in German. In contrast, Romansh dominated the Church of God and the Gray League; With the exception of Chur, Italian and German played a subordinate role there. After a devastating city fire in 1464, Chur was rebuilt by mostly German-speaking craftsmen. Most stayed and the majority of the townspeople spoke German. Italian dominated the southern valleys of the Church of God and the Gray League, namely in Bergell , Puschlav and Misox . So decided z. B. Bergell in the 16th century to use Italian as a written language while the population continued to speak Romansh. The decision to use Italian was influenced by Reformed refugees and preachers from Italy. German was spoken in two variants. In communities affected by Walser were dominated who spoke Bewöhner Highest Alemannic German , in communities affected by alemannischen were dominated immigrants, High Alemannic German . Officially, the Drei Bünde were trilingual.