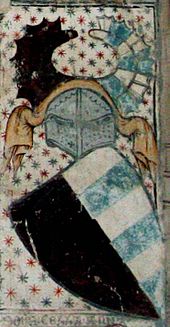 Rhäzüns Castle, view from the south

The Barons of Rhäzüns were from the 12th to the 14th century next to the Barons of Vaz one of the most powerful noble families in the Grisons Alps. They are documented from 1137 to 1458. Their home territory was the rule of Rhäzüns in the Swiss canton of Graubünden . The Rhäzünser reached the height of power around 1400 under Ulrich II. The Mighty.

The lords of Rhäzüns are first mentioned in a document in 1137 with Arnoldus de Ruzünne, the Rhäzüns castle not until 1282. However, there was probably a castle at the site of the present-day castle earlier, as a Rhäzüns castle was first established in 960 in connection with an exchange deal mentioned between Otto the Great and the Bishop of Chur.

The Rhäzünser pursued an expansive territorial policy and were able to gradually expand their property. In addition to their rulership with the villages of Rhäzüns and Bonaduz , they gained Obersaxen as an episcopal fief . At the beginning of the 14th century they wrested the rule of Jörgenberg from the barons of Vaz and their heirs . In 1383 they acquired the rulership rights on Heinzenberg , Safiental and Vals from the Counts of Werdenberg-Sargans . From there they accessed episcopal rights on the Heinzenberg and in the Domleschg , especially the monastery bailiwick of Cazis .

The expansion of the Rhäzünser was stopped by the resulting disputes with the Bishop of Chur. These and other disputes contributed to the establishment of the Gray League in 1395 , a state peace initiated by the Oberland nobility and the Disentis Abbey , which allied with the Church of God in 1406 .

After the death of the last Rhäzünser Georg Brun von Rhäzüns in 1458, after violent inheritance disputes, the areas acquired by the Sargans were returned to them. As an exception, Vals came to the barons of Sax . The remaining possessions came to the Counts of Zollern in 1461 .