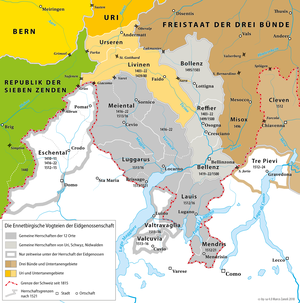 Map of the Ennetbirgischen Bailiwicks of the Old Confederation

The betrayal of Novara: Lucovico Sforza, “il moro” is handed over to the French by his Swiss mercenaries 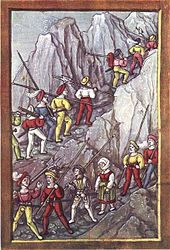 Swiss rice walkers on their way across the Alps

The Ennetbirgischen campaigns were a series of disputes from 1402 to 1515 between the Confederation , the Duchy of Milan , France , the House of Habsburg , the Pope and various Italian states for supremacy in Northern Italy, in particular for rule over the Duchy of Milan (see also: Italian Wars ) . In the course of the Ennetbirgischen campaigns, the Swiss Confederation and its allies conquered Ticino , Valtellina and Chiavenna .

Beginning of the federal expansion to the south 1403–1478

The economic ties between the central Swiss cantons of Uri , Schwyz and Unterwalden and the Po Valley became stronger in the 13th and 14th centuries through the expansion of the Gotthard Pass . The mountain farmers exported cattle and dairy products to northern Italy and benefited from traffic between Milan and northern Switzerland. After the death of Gian Galeazzo Visconti , Duke of Milan in 1402, a brief civil war broke out over his successor. This prompted the Leventina , Uri and Obwalden valleys to call for protection. Both cantons then included the Leventina in their land law, but reserved the right to decide on war and peace and to appoint judges in the valley. The Leventines had to swear unconditional obedience to Uri and Obwalden, but gained more freedom compared to the rule of Milan, as they were granted municipal autonomy. With the barons of Sax , who ruled the Misox valley , and the Ursern valley , further land rights agreements followed in 1407 and 1410.

By 1418 Uri and Obwalden conquered the Eschen , Verzasca and Maggia valleys . Emperor Sigismund recognized these conquests in the same year. In 1419 Uri and Obwalden forced the Lords of Sax-Misox to cede the strong fortress Bellinzona to them, which seemed to secure their rule over the Leventina. The strong castles near Bellinzona blocked the entrance to the Po Valley. In 1422, however, Duke Filippo Maria Visconti of Milan advanced with a huge mercenary army towards the north, occupied Bellinzona with its fortifications and defeated the hastily sent troops from Uri, Obwalden and the supporting towns of Lucerne and Schwyz on June 30, 1422 in the battle of Arbedo annihilating with eight times the superiority. With the peace treaty (1st Milan Capitol) in 1426, the border of the Duchy of Milan was again brought forward to the Gotthard, but the federal merchants were granted duty-free as far as Milan.

The robbery of some federal merchants in the Duchy of Milan in 1439 provided the pretext for a new foray by the Uri over the Alps. Since Duke Filippo Maria had overstretched his strength, he had to leave the Leventina to Pollegio as pledge to Uri in 1441. After Filippo Maria's death in 1447, the people of Uri tried in vain in alliance with the Lords of Locarno and Sax-Misox to bring Bellinzona back into their hands. The new lord of Milan, the Condottiere Francesco Sforza , secured Bellinzona again by defeating the Uri and their allies in the battle of Castione on July 6, 1449.

Duke Galeazzo Maria Sforza of Milan promised the Urners to cede the Leventina in 1466 and signed a friendship treaty with the Confederation in 1467, but he hesitated to hand over the area further and further. When the Swiss Confederation got involved in a war with Duke Charles the Bold of Burgundy (→ Burgundian Wars ), the Duke of Milan even formed an alliance with Burgundy. Uri's troops therefore advanced over the Gotthard into the Leventina, where they were received as liberators and received strong support from the locals. Auxiliary troops from the rest of the Swiss Confederation also joined Uri's troops. However, a siege of the Bellinzona fortress bar failed after two weeks, which is why the Swiss troops withdrew again via the Gotthard.

Shortly afterwards, an army of around 10,000 men from Milan arrived at Bellinzona to relieve the fortress. When this army advanced into the Leventina, a weak Uri contingent of 175 men, supported by around 400 locals, managed to flee the army of Milan in the Battle of Giornico (Battaglia dei Sassi Grossi) on December 28, 1478 beat. The Leventina thus fell permanently to Uri, but Bellinzona remained with Milan.

With the Italian campaign of King Charles VIII of France in 1494, the long struggle between Habsburg and France for supremacy in Italy began . During the Swabian War between the Confederation and the Swabian Federation in 1499, King Ludwig XII. With the help of approx. 6000 Swiss mercenaries, the city and the duchy of Milan, since he claimed the legacy of the Visconti family for himself. For this purpose he had concluded a pay alliance with the Swiss Confederation.

The recruiting of mercenaries, the so-called " Reislauf ", had meanwhile become so rampant in the Confederation that federal mercenaries were soon represented in all major armies of the parties involved in the Milan wars. Young men were either recruited individually or moved to Italy in groups in order to hire themselves out as mercenaries. In addition, the federal locations also delivered mercenary troops to foreign interested parties on the basis of so-called surrenders , i.e. H. Pay contracts between the cantons, which took on the recruitment, training and organization of the troops, and the foreign client who decided on the deployment. The fact that Swiss were now represented on all sides was already a problem for their contemporaries. The "quick money" by the mercenary system also led to a collapse of morals. B. the Zurich reformer Ulrich Zwingli took a stand against the practice of running rice.

Ludovico Sforza also recruited thousands of Swiss mercenaries thanks to the abundance of funds available and recaptured his duchy by the spring of 1500. Louis XII. recruited over 14,000 Swiss citizens and invaded Lombardy. At Novara, however, the Swiss mercenaries on both sides refused to fight each other. When the Swiss withdrew from the city of Novara , they tried to smuggle the duke out of the enclosed fortress, but they did not succeed. Allegedly, a man from Uri from the French army betrayed the dark-skinned duke - he was nicknamed "il moro" - for money. This Novara betrayal has often been lamented in the Confederation. A chronicler summarized this with the words that the Swiss brought home a lot of money, eternal shame and no honor at all from Novara. The Federal Diet subsequently tried to regulate rice walking more closely, but for a long time without success.

The French king had promised the confederates the cession of Bellinzona and other Ticino valleys, but when he held the Duchy of Milan firmly in hand after the victory at Novara, he hesitated to fulfill his obligations. The people of Uri had already occupied the Blenio Valley, the Riviera and in 1500 Bellinzona since 1495. In the Peace of Arona, Louis XII. In 1503 these areas were removed from the Uri, Schwyz and Nidwalden estates.

Under the influence of the Valais bishop and cardinal Matthäus Schiners , the Confederation renounced the renewal of the pay alliance with France in 1509. To this end, an alliance with the Pope was concluded the following year. Under the leadership of Pope Julius II, who wanted to break French rule in Lombardy, the Confederates repeatedly moved to Italy. The exits to Pavia in 1512, to Novara and Dijon in 1513 remained victorious and brought the Confederation and the allied Graubünden further territorial gains in the Po Valley. Locarno , Lugano , Mendrisio , Cuvio , Travaglia , Chiavenna , Bormio , Veltlin and the tre pievi .

The beginning of the Reformation divided the Confederates and weakened their position in the Italian disputes between Habsburg, the Pope and France. In 1515 King Francis I of France defeated a federal army near Marignano that had been decimated by the withdrawal of numerous estates . In the Eternal Peace of 1516, Francis I granted the Confederates and Graubünden their conquests , but Ashenvale came back to Milan. Thus the southern border of the Swiss Confederation was essentially consolidated by 1797. The acquisitions of the Confederation in Ticino were administered as so-called Ennetbirgische Vogteien by provincial governors as common lords .

In 1521, the Swiss Confederation concluded a new pay alliance with Francis I, which obliged them to employ up to 16,000 men. In the further struggle for Milan between Francis I and Emperor Charles V, the Confederates therefore still played an important role. Both battles with substantial federal participation at Bicocca 1522 and Pavia 1525 ended with a defeat for France. This ended the federal great power politics in Europe definitely.