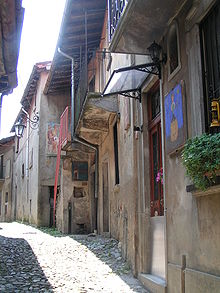 Paintings placed on the walls of houses in Arcumeggia

The Pieve di Val Cuvia (also Valcuvia ) was one of the 65 administrative units of the Duchy of Milan from 1521 to 1797 . Between 1513 and 1515 it was temporarily under the rule of the Old Confederation . The term pieve, German for "parish", comes from the ecclesiastical division of the (arch) diocese of Milan and was adopted in the duchy of Milan until 1797 for civil administration. The parish of Val Cuvia was ecclesiastically subordinate to the Diocese of Como and comprised the following parishes:

The Val Cuvia was occupied by the Confederates together with the Val Travaglia in 1512 and made a bailiwick . The territorial affiliation of the valley remained controversial between Milan and the Swiss Confederation even after the end of the Milan War in 1516. In 1521 Val Cuvia came to the Rusca family from Milan and was thus integrated into the Duchy of Milan. In 1526 the Swiss Confederation exchanged its claims to the valleys of Val Travaglia and Val Cuvia for recognition of their rule over southern Ticino.