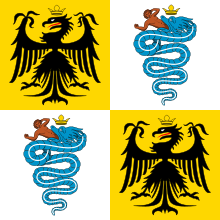 The Duchy of Milan around 1494

The Duchy of Milan ( 1395 - 1797 ) was a state in northern Italy that, when it was founded at the end of the 14th century, included what is now Lombardy and parts of the regions of Piedmont , Veneto , Emilia-Romagna and Tuscany .

The duchy came into being when Gian Galeazzo Visconti , governor of the city since 1378 , received the title of Duke of Milan through imperial diploma from Wenceslaus of Luxembourg , King of the Holy Roman Empire (1378–1400) . The Duke's seat was the city of Milan. The territory of the Visconti family, which consisted of the former city republics of Milan, Como, Bergamo and the area of ​​Parma, was constituted as a new duchy.

The duchy largely coincided with Lombardy and was part of the empire, but de facto independent. Its territory whose boundaries changed several times over the years, closed temporarily and Parma with one, to this city in the 16th century an independent state was

Coat of arms of the House of Visconti

The Visconti had been lords of Milan since 1311 . Milan, located at the crossroads of the major arteries that crossed the Alps, had become an important industrial, craft (textile and metalwork) and agricultural ( reclamation , sewerage , irrigation ) area. Gian Galeazzo Visconti (1378–1402) united the large estates of the family ( Lombardy , parts of Piedmont and Veneto , Emilia and some cities in central Italy) and was awarded the title Duke of Milan in 1395 (thanks to the Milan Cathedral and the Certosa) from Pavia ). At his death, Gian Galeazzo's son, Giovanni Maria , could not hold on to his father's conquests and the duchy collapsed. When he was killed in 1412, he was succeeded by his brother Filippo Maria , who continued the father's conquests after restoring the duchy, and clashes with Venice broke out . The war lasted ten years (1423-1433) and ended with the Peace Treaty of Ferrara and the surrender of Brescia and Bergamo to the Venetians.

The Republic and the Sforzas 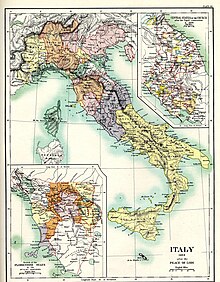 When the Visconti died out in 1447, Milan declared itself a republic, although the Duke of Orleans was the legal heir according to the treaty. He was unable to make his claims, but the republic was nonetheless short-lived. The mercenary leader Francesco Sforza , who had married an illegitimate daughter of the last Visconti duke, seized power in 1450 and declared himself duke.

In 1498 the Duke of Orleans was named Louis XII. King of France , trying to assert his father's claims. In the following year he attacked the duchy and was able to drive out the then ruler Lodovico Sforza . The French ruled Milan until 1513 when they were ousted by the Swiss , who put Lodovico's son Massimiliano on the throne. In 1515 the French under Francis I won the battle of Marignano and put Massimiliano prisoner. In 1521 they were ousted again, this time by the Austrians , who installed Massimiliano's younger brother Francesco II Sforza .

After the heavy defeat of the French at Pavia in 1525, Francesco joined the League of Cognac (from Venice, Florence, the Pope and France). He was expelled from Milan by the imperial rulers, but maintained the other cities of the duchy and regained control of Milan in the Peace of Cambrai in 1529 .

When Francesco Sforza died in 1535 without an heir, the question of succession arose again. Both the emperor and the French king claimed Milan, which again led to war. The Roman-German Emperor Charles V was victorious and gave the duchy to his son Philip II of Spain . Southern areas of the Duchy of Milan fell to the Papal States and were passed on to a papal nephew from the Farnese family as the Duchy of Parma in 1545 . In 1556, when the Habsburg inheritance was divided, Milan became a subsidiary of the Spanish crown. In 1559 the French confirmed the possession in the Treaty of Cateau-Cambrésis .

Milan remained in Spanish hands until the War of the Spanish Succession , in which it was conquered by the Austrians, who received it in the peace of 1714. It stayed there until the country was overrun by Napoleon's French revolutionary army in 1796 . In the Peace of Campo Formio Austria ceded Milan and it became part of the Cisalpine Republic , later of Napoleon's Kingdom of Italy and again of Austria in the Congress of Vienna .

The coat of arms of the Duchy of Milan shows that of the Visconti family , the biscione . It is a snake that gives birth to a person from its throat. It is quoted in the logo of the car brand Alfa Romeo , which belongs to the Fiat group.