The complex is one of the most important architectural monuments in Northern Italy and has been a national monument of Italy since 1866 . It is currently inhabited by Cistercian monks.

Inside the monastery church 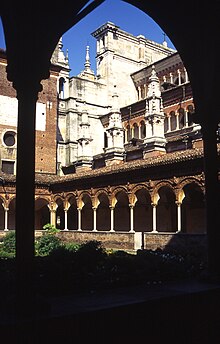 The Certosa (German Charterhouse ) owes its foundation to the wish of Gian Galeazzo Visconti , Duke of Milan , to build a monastery in the park of his castle, which should also be the burial place of his dynasty. The park once extended from the Duke's palace, the Castello Visconteo in the urban area of ​​Pavias, over ten kilometers to the Charterhouse. Construction began in 1396.

The Carthusians devote themselves particularly to prayer for their own and others' salvation. Rulers ruling dictatorships like the Visconti were obviously interested in this. There are several examples from history that tyrannical and feared rulers supported the establishment of religious sites out of fear of eternal damnation and to improve their public repute, in order to excuse their political actions.

The completion of the monastery took a long time. The Renaissance facade of the Madonna delle Grazie church was not completed until 1549, 150 years after construction began. The design of the impressive facade is attributed to Giovanni Antonio Amadeo . Her plastic jewelry with numerous marble figures probably comes from Cristoforo Mantegazza , his brother and Giovanni Antonio Amadeo himself. The cultural historian Jacob Burckhardt judged her in his Cicerone : “Along with that of the Orvieto cathedral , she is the first decorative gem in Italy and in the world. . The immeasurable magnificence and, in part, the fine decorative taste, which dominate the ground floor, have produced a whole that is incomparable in its kind. "

The nave was completed in the middle of the 15th century. The interior of the monastery church is extremely picturesque and colorful with late Gothic and Renaissance elements and houses several tombs. The life-size marble figures of Prince Ludovico il Moro and his wife Beatrice d'Este , who died at the age of 22, are particularly worth seeing because of their realistic depiction. Gian Galeazzo Visconti is buried in the south transept.

The side aisles are so high that the impression of a hall church is created. A look into the vaulted area shows that a refined sense of color has also been used here. However, the nave only has very small windows and is comparatively dark, which does not allow the decorative colors to come into their own. It is possible that the monastery ideals of the Carthusians and the pompous will of the Visconti contradicted each other.

The monastery is an extensive complex. In the small cloister next to the church, a terracotta statue crowns each column. Above are the arcades and towers of the church. The 23 monastery cells are grouped around the large cloister  . They are arranged as identical houses around the large cloister, each with access to its own small garden. Today some of them are open to the public.