Since his accession to the throne in 1387, the Hungarian King Sigismund has sought support in the Western world in the fight against the Ottomans , who have been steadily advancing north for half a century and have already reached the Hungarian border. After lengthy efforts on the part of Pope Boniface IX. and the antipope Benedict XIII. , a crusade army rallies under Johann Ohnefurcht and Marshal Boucicaut in Buda . The majority of Burgundian Crusaders march at the side of the Hungarian army in Bulgaria and reached on 10 September Nikopolis . For two weeks they overran the fortress in vain, and the reinforcement by the Johanniter who had advanced across the Danube did not turn the tide . Then reaching Ottoman army of Bayezid I , along with the armored horsemen of his Serbian vassal Stefan Lazarevic Nikopolis.

Above: The Battle of Nicopolis. Below: execution of the captured knights by Bajezid

In the Battle of Nikopolis , the Burgundian-Hungarian crusader army suffered a devastating defeat against the Ottomans on September 25th . Bayezid has many of the captured crusaders killed, for whom no ransom is to be expected, either out of personal anger over the victory, which was bought with high losses, or to provide his soldiers with an outlet for their thirst for revenge . The sources speak of 300 to 3,000 men here. The high-ranking prisoners, such as Johann Ohnefurcht and Jean II. Le Maingre , are deliberately avoided by the Turks from this massacre in order to demand a handsome ransom, which in most cases is also paid by their relatives. Some of the prisoners, such as Johannes Schiltberger , survive because they are spared due to their young age. The numerous refugees from the battle often try to get back to their homeland on their own, but many of them perish on the way home. Sigismund and the Grand Master of St. John can also flee across the Danube with the help of Hermann II von Cilli . They take the sea route across the Black Sea into the Mediterranean, fearing that they will be captured by what they consider to be the treacherous Wallachian voivod Mircea the Old .

As a result of the battle, Ottoman troops penetrate as far as northern Greece and Syrmia . 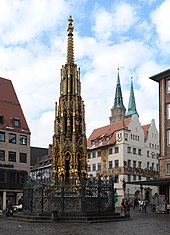 The beautiful fountain, on the right the towers of the Sebalduskirche