The Archbishop of Cologne Friedrich III. von Saar Werden crowns the Palatinate Elector Ruprecht from the House of Wittelsbach on January 6th in Cologne Cathedral as Roman-German King . The cities of Aachen and Frankfurt am Main , which are on the side of King Wenzel from the House of Luxembourg , who was voted out by the Electors of Cologne , Mainz and Trier together with Ruprecht last year , have previously refused to open the gates to the new king.

In the empire , Ruprecht quickly found recognition in the areas close to the king, because Wenzel did nothing further. However, Ruprecht's sphere of activity remains very limited. In particular, the powerful House of Luxembourg does not recognize his choice. On the question of the occidental schism he adheres strictly to Rome and advocates a council to be convened by the king . Despite this support, Pope Boniface IX refused him . recognition as king.

Ruprecht sees himself confronted with several problems: The Reichsgut has shrunk more and more in the past decades and Ruprecht's own domestic power is not enough to cover all the costs. For this reason he makes a move to Italy . Ruprecht, however, cannot muster a large army, especially since Milan under Gian Galeazzo Visconti is an overpowering opponent in imperial Italy .

Prince Abbot Kuno von Stoffeln tries to reclaim legally justified taxes that have not been used from the state of Appenzell , which has been under the Prince Abbey of St. Gallen since the early Middle Ages . This arouses resistance in the state of Appenzell, but also in the city of St. Gallen , which on January 17th culminated in an alliance between the city of St. Gallen and the five Appenzell municipalities of Appenzell , Gais , Hundwil , Teufen and Urnäsch . The conflict between the two parties, from the up in the years to 1429 permanent Appenzeller wars develop, revolves mainly around the rights to freedom of movement, marriage, Vererb- and saleability of a fief of the Abbey as well as hunting and fishing rights.

The Hanseatic League and the Vitalienbrüder

Störtebeker monument by Hansjörg Wagner in the HafenCity in Hamburg 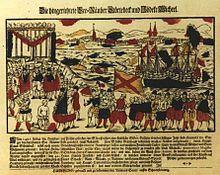 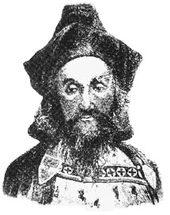