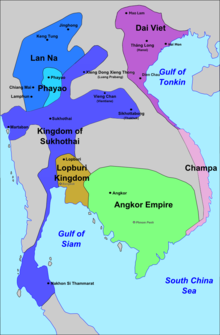 Sukhothai ( Sanskrit Sukhodaya , "great comfort effecting") was a Kingdom of Thai , which existed from the 13th century to the early 15th century. Its center was in the northern Chao Phraya basin, at the transition from today's central to northern region of Thailand . At its peak (around 1300), Sukhothai's area of ​​influence encompassed large parts of present-day Thailand and individual places in Laos and Myanmar .

Sukhothai is considered the first Thai kingdom by contemporary Thais . Essential foundations of Thai culture and religion, state and social order emerged during this time. The ruins of the old royal city, which have been accessible again in the Sukhothai Historical Park for several decades, not only represent past political, but also cultural and spiritual greatness.

The Sukhothai period (13th and 14th centuries) is considered to be the first high point in Thai art history. The Buddha images from this phase are considered by many to be the most beautiful and charming in Thailand.

Significant evidence of the Sukhothai Kingdom can be found in the ancient capital as well as in the Si Satchanalai and Kamphaeng Phet historical parks . Together they have been a UNESCO World Heritage Site since 1991

Until the 13th century, large parts of the Southeast Asian mainland were ruled by the Khmer Empire of Angkor . By 1100 at the latest, the presence of Tai peoples in the area is documented, who presumably immigrated here from the north. In some cases, the Khmer rulers used Tai tribal chiefs as governors for areas predominantly inhabited by Tai. Sukhothai's history as a kingdom began with two such governors, Khun Bang Klang Thao (Hao) and Khun Pha Mueang , who together shook off the supremacy of the Khmer. In 1238 , Khun Bang Klang Thao declared the independence of the Sukhothai area from the Khmer Empire, and at the same time refused to pay the tribute due .

Khun Bang Klang Thao was proclaimed the first king of the new kingdom and called himself Sri Indraditya . The Khmer had no way of taking decisive action against the new kingdom on the western edge of their rule, as they had started too many new construction projects.

The people were impressed by the skills and courage of their new king. They gave him the nickname Phra Ruang , which means “glorious prince”. This epithet was later passed on to all the kings of Sukhothai. King Sri Indraditya and his queen, Nang Suang, had three sons. The eldest died at a young age, the second was named Ban Mueang, and the third son was Ramkhamhaeng . After the founder's death, Ban Mueang became the second ruler of Sukhothai, followed by Ramkhamhaeng. 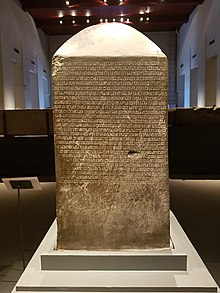 The so-called Silacharuek Sukhothai (stone inscriptions from the Sukhothai Kingdom) are hundreds of stone stelae on which the history of the region was recorded. One of the most important inscriptions is the Silacharuek Pho Khun Ramkhamhaeng (stone inscription of King Ramkhamhaeng). King Ramkhamhaeng is said to have recorded the Thai alphabet , which is still used today, for the first time , which was formed from the Mon and Khmer scripts . The authenticity of the inscription has been doubted by historical scholars since the 1980s. The first text that has come down to us in this book says about the Sukhothai Empire:

According to this inscription, Ramkhamhaeng is said to have ruled justly and with generosity towards his people. He is portrayed less as a monarch than as the father of the large Thai family ( pho khun , "fatherly ruler"). Every citizen who had legitimate concerns is said to have had the opportunity to come to the palace and sound a bell specially set up for this purpose in order to receive an audience with the king. Ramkhamhaeng is portrayed as being very religious and is believed to have led the people to follow his example to regularly attend sermons . The inscription states that he monks from Ceylon invited to the Theravada - Buddhism Sukhothai to obtain pure. Many new temples were built to accommodate the Buddha statues in the Sukhothai style that is still known today.

During this time, traditional traditions, convictions and social structures of the originally animistic and non-scriptural Tai peoples mixed with cultural elements and influences of the Theravada Buddhist Mon and the Brahmanic - Hindu Khmer. This mixture shaped the cultural and social identity of the Thai during the following centuries and up to the present day.

In the north, two other empires had broken away from the Khmer. Ramkhamhaeng was on good terms with both of them. One realm, Lan Na , was led by King Mangrai , Phayao was under King Ngam Mueang . In 1287 the three concluded the "Three Kings Treaty" (sanya sam kasat) , in which they promised mutual assistance against the Mongols under Kublai Khan . At the same time, they probably delimited their spheres of interest from one another so as not to conflict with one another. Ramkhaemhaeng subjugated a large number of city-states, some of which were far from Sukhothai, and made them vassals. Towards the end of the 13th century his area of ​​influence extended to Nan in the north, Luang Prabang and Vientiane in what is now Laos in the northeast, Nakhon Si Thammarat in the south and Martaban in what is now Burma in the west. However, as was the rule with the pre-modern Southeast Asian “empires”, dominance over these areas was determined exclusively by the personal loyalty of the local rulers to the charismatic and militarily successful Ramkhamhaeng. After his death around 1298, it fell back to a radius of about 150 km from the capital under his son Loe Thai .

Around 1345 the Traibhumikatha (or Traiphum Phra Ruang ) was created, an important representation of the cosmology and worldview of the Buddhist Thai. It is attributed to the king Li Thai (r. 1347-1370).

In 1351, Ayutthaya, a city in central Thailand, was founded, which within a very short time also developed into an important center of power for the Thai. Many local principalities that had previously been dependent on Sukhothai as vassals have now become Ayutthaya. This cut off the important trade routes from Sukhothai to the Gulf of Thailand. In 1378 Sukhothai itself also became a vassal of the new kingdom. Under King Mahathammaracha III. (Sai Lüthai) it gained independence again around 1400 and was able to restore its former supremacy in the northern Chao Phraya basin. In 1412, however, Ayutthaya again demoted it to a vassal. The last king, Mahathammaracha IV. (R. 1419-1438), moved the capital in 1430 to Phitsanulok .

After the death of Mahathammaracha IV in 1438, Ayutthaya's King Borommaracha II sent his son Ramesuan (later King Borommatrailokanat ) to Phitsanulok to rule as " viceroy " over the territory of the previous kingdom of Sukhothai. This became completely part of the Kingdom of Ayutthaya. The former kingdom of Sukhothai did not simply merge in Ayutthaya, but the two traditions merged in the period that followed. The martial arts, administrative structure, architecture, religious practice and language of Sukhothai had a great influence on those of Ayutthaya. Since Ayutthaya did not yet have a centralized administration, the city-states that had previously belonged to the heartland of Sukhothai and were now called "northern provinces" (Müang Nüa) retained a certain degree of independence. They were administered by local aristocrats who traced their ancestry back in part to the kings of Sukhothai. The most important of these city-states was now Phitsanulok , the former capital Sukhothai had lost much of its importance. The former Sukhothai elites linked up with those of Ayutthaya through marriage alliances. Often the military from the north served as commanders because they were known for a tougher military tradition.

From 1456 to 1474, the former area of ​​Sukhothai was the subject of a war between Ayutthaya in the south and the northern Tai empire Lan Na , from which Ayutthaya emerged victorious. During this time, Phitsanulok acted as a “second capital” alongside Ayutthaya, which is why contemporary Portuguese traders described the two as “twin states”. The nobility of the northern provinces, who emerged from the elite of the Sukhothai Empire, often played the role of kingmaker in Ayutthaya. In 1569 Maha Thammaracha became king of Ayutthaya. He had previously been governor of Phitsanulok and viceroy of the northern provinces and claimed to be descended from the Phra Ruang dynasty of the kings of Sukhothai.