Audience of the French ambassador le Vicomte d'Andrezel with Sultan Ahmed III. on October 10, 1724 in Topkapı Palace at the Gate of Bliss (Jean-Baptiste van Mour, 1724)

Under Audience (from Latin audire , 'to hear) is the granting of the show in front of a significantly higher ranking person. A distinction is made between audiences for individual people and those for groups of people. If an audience is used for personal conversation, it is referred to as a private audience . Strictly speaking, an audience only includes “the right to appear, not necessarily the right to an interview”.

To have access to a high personality at any time without being called, the right to speak immediately , was considered a very high privilege.

Elena of Montenegro and Marie José of Belgium at the audience with Pope Pius XII. in the Quirinal Palace in December 1939 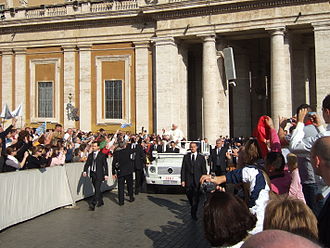 Today the term is mostly used in connection with a visit to the Pope or a secular monarch . In the earlier language of the court , audience also meant a court session , particularly at the German Reich Chamber Court and the French parliaments , but also an interrogation, a preliminary ruling or an oral hearing. In Castile and later in Spain and its colonial empire, the Real Audiencia (English: Royal Audience ) was the highest judicial body. The Audiencia Nacional de España is still one of the highest courts in Spain.

At a papal audience, one can distinguish three types according to the number of participants:

Private audiences usually take place as individual or group audiences in the Pope's private library . Here the Pope receives bishops who report to him on the status of their dioceses . It is also visited by politicians , scientists , diplomats and other representatives of cultural and social life. The Pope grants between 450 and 500 such private audiences a year.

The Pope welcomes larger groups of clergy , participants in congresses and conferences and also groups of pilgrims in the rooms of the Apostolic Palace , but more than 2,000 people in the Vatican audience hall .

Every Wednesday - mostly in the morning at 9:30 a.m. - there is a so-called general audience ( Wednesday audience ) of the Pope on St. Peter's Square in front of St. Peter's Basilica . In the winter months and in bad weather it is carried out in the Vatican Audience Hall . Because of the great rush in the years of the pontificate of Pope Benedict XVI. there was a lack of space here several times, so that some of the participants had to move to St. Peter's Basilica. That is why Benedict XVI came. following the general audience broadcast by loudspeaker for a short address in St. Peter's Basilica. Since the pontificate of Pope Francis , the number of participants has tripled. This is mainly due to the strong increase in the response from Italian pilgrims. Bridal couples are usually received personally by Pope Francis.

The weekly general audience was held by Pope Pius XI. established in the Holy Year 1925.