Researchers assume that the center of the Srivijaya Empire (Ligor) was located here as early as the 8th century . In the 13th century, the city was an important trading post for Ceylon and southern India . In 1292 King Ramkhamhaeng conquered the area and incorporated it into his kingdom of Sukhothai . After its decline around 1350, Nakhon Si Thammarat fell to Ayutthaya and formed a tributary partial empire. In 1516, King Ramathibodi II allowed the Portuguese to set up a trading post here.

At the beginning of the 20th century, King Rama V ( Chulalongkorn ) fundamentally redesigned the administration of Siam in order to connect the outer areas of Siam, which were endangered by the colonialist tendencies of France and England, more closely to the center. As a result of the Thesaphiban reform, a Monthon Nakhon Si Thammarat was therefore established, which included the provinces of Songkhla, Phatthalung and Nakhon Si Thammarat. The city of Nakhon Si Thammarat formed the capital of Monthon. 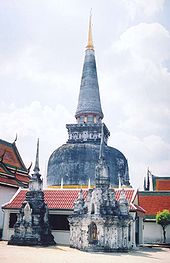 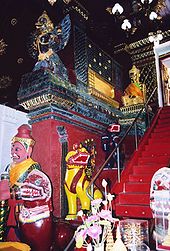 Nakhon Si Thammarat is an important center of Thai handicrafts , u. a. the goldsmith's art has been developed to perfection using the niello technique (rubbing impression). Fruit crops and mining in the nearby Khao Luang mountain range form the basis of the city's wealth.

Nakhon Si Thammarat has a train station on a branch line of the Southern Railway , which connects Bangkok with Malaysia .

Nakhon Si Thammarat is the headquarters of the Fourth Army Region of the Thai army , which is responsible for the defense of southern Thailand and their troops mainly in the conflict in the southern provinces are used.

The Wat Phra Mahathat (Thai วัด พระ มหาธาตุ วรมหาวิหาร ) is the most famous Buddhist temple ( Wat ) of Nakhon Si Thammarat and one of the oldest in Thailand. It was built when the city was founded and has a tooth relic of the Buddha.

The 74 meter high chedi is called Chedi Phra Baromathat , it is located in a small courtyard filled with a forest of 173 smaller chedis. It was built as early as the 5th, possibly even the 8th century; it is said to have been built over an older, square chedi in the Srivijaya style. In the 13th century it was expanded and enlarged and got its current appearance in the Sri Lankan style. The courtyard is surrounded by a covered gallery called Viharn Tap Kaset , which is decorated with Buddha statues and elephant heads that seem to peek out from the base of the chedi. In Viharn Phra Song Ma there is a staircase which leads up to the tour around the chedi above the gallery. The staircase is guarded by mythological giants ( yak ).

To the north of this is the Viharn Kien with a small temple museum. South of the chedi is the magnificent ubosot , which was built in Ayutthaya style in 1628. The monks' living quarters are across the street in a separate temple, Wat Na Phra Boromathat.

The chedi is the symbol of the Nakhon Si Thammarat province and is also depicted in the seal of the province.