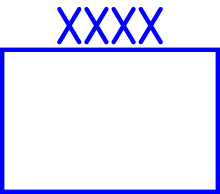 Depending on the context, the term denotes

An army is a large body of armed forces under the uniform leadership of an army high command, the size and composition of which can vary widely. Armies are often formed for a specific purpose or theater of war from several corps and army troops ( units and units directly subordinate to the army high command ).

Armies have the organizational and logistical base that enables independent and extensive operations . In addition to the actual combat troops , this includes troops for logistics and medical services . The Army High Command , led by a Commander-in-Chief , is a higher command authority that controls all measures within its operational area and in the stage (First World War) / in the Rear Army Area (Second World War). The unit superordinate to an army is the Army Group , the largest subordinate units are corps , which are further divided into divisions .

To differentiate between the individual armies, a number is usually used, such as 1st Army. Other distinctions are points of the compass, which result from any base according to the area of ​​operation, such as Eastern Army. Armies are also named according to geographical conditions, such as the Rhine Army or the Alpine Army. In addition, the purpose of the army can be used for naming, z. B. Invasion , occupation or observation army . One also speaks of an operational or field army, reserve and occupation army. The army with the main commanding officer was previously called the main army, under Napoleon I also called the Great Army .

The command of an army was carried out by a commander in chief , usually with a chief of staff as the first assistant in command and an army staff.

There were and are no armies in the Bundeswehr . Its largest permanent formations are divisions , which, when deployed, support the multinational corps or a headquarters for command at the operational level, e.g. B. Multinational Command Operational Leadership. In the Cold War , the direct subordination of the eight NATO forces on German territory under the two army groups (was army groups ) NORTHAG and CENTAG provided. In terms of the geographical extent of their command, these army groups roughly corresponded to those of the Second World War, and in terms of size they were more armies. Only the two American corps formed the 7th US Army in peacetime .

The NATO command structure could be tightened with the end of the Cold War , the need for units larger than corps was eliminated for NATO. The now multinational corps to which the Bundeswehr belongs are directly subordinate to SHAPE . Subordinate to this are the Allied Joint Force Command as commandos for Europe Central Brunssum. Subordinate to this is the Land Command Izmir for the Central Europe Land Forces as the successor to NORTHAG and CENTAG .

Delousing note from the army newspaper , printed by AOK 10 , with a caricature by Fred Hendriok , around 1916

In the army of the German Empire , the Army Inspections (most recently No. I to VIII) existed as command authorities above the army corps , which were converted / renamed into Army High Command during the First World War .

In Austria-Hungary , the Army High Command (AOK) set up at the beginning of the war in the summer of 1914 - there was only one - was the command center for all land and naval forces deployed in the dual monarchy.

During the Second World War, an AOK (Commander-in-Chief: generally Colonel General upwards) led several army corps and had its own (army) troops, e.g. B. heavy artillery , engineers and other special troops, which were subordinate to him according to availability and order. The AOK was located as a command between the Army Group and the Army Corps . As a rule, however, the request for and distribution of supplies was carried out directly by the senior quartermaster of the AOK; the Army Group Command was only involved in crisis situations.

The area of ​​responsibility of an AOK was divided into the area of operations , which in turn was subdivided into corps and division level, and the rear army area , which was subordinate to the "Commander rear area" ( Korück ).

In the course of the war, army departments and army groups were formed as a temporary measure in addition to the AOKs . These often did not have all the required command means and were named after the respective commander.

Structure of an AOK

The normal structure of an army high command in World War II included: