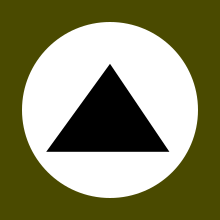 The 7th Army / Army High Command 7 (AOK 7) was a large unit of the Army of the Wehrmacht during the Second World War . She was the high command of changing army corps and numerous special troops.

It was set up on August 25, 1939 in military district V (Stuttgart) , with General of the Artillery Friedrich Dollmann as commander. When war broke out, the army secured the German western border on the Upper Rhine and provided the garrison of the western wall . At the beginning of the western campaign of 1940, the 7th Army was subordinate to General Wilhelm Ritter von Leeb as part of Army Group C. On June 14, 1940, more than a month after the start of the offensive, Army Group C attacked the Maginot Line head-on. (At this point the line had already been cut off from its rear connections by rapid units of the 4th Army (XXXXI. AK (mot.)). The tops of the 7th Army reached the east bank of the Rhine at Alt- Breisach and the bunkers at Colmar . Together with the XXXXI. Army Corps, Army Group C pursued the French 2e Groupe d'armées with around 400,000 men and surrounded them in Lorraine . The 7th Army occupied Eastern France until the Franco-German armistice was concluded on June 22, 1940 .

She was then stationed for security tasks on the Atlantic coast in southwest France. On November 11, 1942, she took part in the Anton company (occupation of Vichy France). In 1944 she was part of Army Group B ( Rommel ) in the Brittany - Normandy area on the canal .

When the Allied landings in Normandy began on June 6, 1944 , the German OB West ( Rundstedt ) was convinced that this was the opening of the invasion, but it remained unclear whether this was the main attack. So only partial forces of the 7th Army were moved to the attack area in the Calvados department . The OKW also ordered the release of Panzer Group West , but their deployment got stuck in the rubble of the shattered villages. The 15th Army on the Pas de Calais , meanwhile, had to secure the use of V weapons and be ready against a possible further invasion. So when the invasion began, only the LXXXIV endured. Army Corps of the 7th Army took the brunt of the Allied attacks from the bridgeheads between Caen and Saint-Lô . In a conversation on June 17, Hitler refused the joint request by Rundstedt and Rommel to turn the V weapons against the landing sites: instead he wanted to hit the opponent's nerve center , London . The next day, the 1st US Army under Bradley cut Cherbourg off from the outside world with the remnants of three to four German divisions. Since the beginning of the Battle of Normandy , the 7th Army had lost 97,000 men, including five generals. On June 28, her commander in chief Friedrich Dollmann died of a heart attack .

On June 29, 1944, SS-Oberst-Gruppenführer Paul Hausser became the new Commander-in-Chief of the 7th Army. In the Wehrmacht command staff , Alfred Jodl recognized early on that there would be no second invasion across the canal. However, his view could not prevail with Hitler and Keitel : the 15th Army remained inactive, while the 7th Army, supported by the 5th Panzer Army, stood alone on the invasion front. At the end of July 1944, differences of opinion between the Allies about how to proceed had not yet been discussed when Dwight D. Eisenhower obtained approval for his plans: On July 25, 1944, a heavy air raid ( bombing of a narrow area ) destroyed the already weakened one left wing of the German front and allowed the advance south. Avranches fell on July 30th . After the Allied forces were subsequently regrouped, Patton's 3rd US Army continued to attack through the gap created in the front ( Operation Cobra ). The Americans overran Brittany and advanced in a wide arc against the Loire , while the infantry advanced on Le Mans . At the same time, the 1st US Army , the British 2nd Army and the Canadian 1st Army attacked in a southerly direction and forced the German units to withdraw. The British 2nd Army broke through the German position system in Operation Tractable ; the connection between the German troops could not be restored. Nevertheless, Hitler ordered the 5th Panzer Army to advance through the endangered section against Avranches on August 6 and to cut off the Americans from their supplies ( Operation Liège ). Together with the retreating 7th Army, she was trapped in the resulting Falaise pocket. Leaving behind most of the heavy material, the dissolving German units managed to retreat eastwards via the dives . However, only remnants of 16 divisions managed to join the 15th Army. When the cauldron was closed on August 20, 45,000 German soldiers were taken prisoner, 10,000 had died.

Retreat and Battle of the Bulge

The formation of a defensive front on the Seine was no longer possible, as the 15th Army had already lost its left wing. In addition, the Allies could have bypassed them in the east after landing on the Côte d'Azur ( Operation Anvil ). The remnants of the 7th Army under their new commander, General Heinrich Eberbach , therefore withdrew together with the 15th Army to the border with the Reich in constant fighting. Rommel's successor as the commander of Army Group B , Field Marshal Günther von Kluge , was replaced by Walter Model on August 17th and poisoned himself with potassium cyanide the next day . During Operation Market Garden , the 7th Army defended the border north of the Moselle . In this enterprise the Allies lost 13,266 men, in the battle of the Scheldt estuary 27,633 men. Then the German front stabilized again; a harsh winter 1944/45 with a few clear days (on which the Western Allies could use their air superiority) favored the defenders ( see also : German Western Front 1944/1945 )

In the face of defeat, the German leadership worked for a while, as they hoped the opposing war coalition would break up. The start of the Ardennes offensive should above all save time and give the Wehrmacht the initiative again. The prerequisite was bad weather, which hindered the enemy air force. The preparations lasted until December '44 due to the supply problems. On December 16, the Wehrmacht attacked and was initially able to achieve considerable success. The 7th Army under Erich Brandenberger advanced south of Bastogne to Martelange . They supported the 5th Panzer Army, whose advance came to a standstill on December 21st at Celles without fuel . From the south, however, the 3rd US Army under General Patton pushed into the flank of the 7th Army. She suffered heavy losses, but was able to withdraw to the frontier again. The German attack had failed: the German casualties amounted to an irreplaceable 90,000 men, the refreshed trunk of the Panzerwaffe had been sacrificed, 60% of the command personnel of the Jagdwaffe had died and important ammunition and fuel reserves had been used up.

Final battle in the empire

While the 21st Army Group ( Montgomery ) advanced on the Rhine near Düsseldorf and Emmerich , the 12th Army Group (Bradley) drove a wedge to Cologne . At the same time, after fierce fighting with the 7th Army in the Trier area , the 3rd US Army advanced against Koblenz , before turning to Mainz and Mannheim in pursuit of the 7th Army . The army groups H ( Blaskowitz ) and G (Hausser) could hardly keep the cohesion with Army Group B (Model). The Ludendorff Bridge fell into the hands of the Allies on March 7th (“Miracle of Remagen”). The next day Bonn fell ; Model had to give up Cologne, which he actually wanted to defend. In addition to the Remagen bridgehead, the Allies owned a second one at Oppenheim , which was captured by parts of Patton's 3rd US Army on March 23 ( Rhine crossing at Nierstein 1945 ): the starting positions for the attack on the Ruhr area .

On March 13, 1945, the Allied troops crossed the river on both sides of Wesel and on March 25, they completed the encirclement of the Ruhr area. While the other parts of Army Group B were enclosed in the Ruhr basin , the 7th Army escaped to the east before the 3rd US Army. Until the end of the war, she carried out constant fighting in retreat, first between Main and Lahn , then in the Spessart - Fulda - Gotha area , in the Thuringian Forest as far as the Leipzig - Hof area . After the unconditional surrender of the German Wehrmacht , the remnants of the 7th Army in the Bavarian Forest and Bohemia went into American captivity .

Armies of the Wehrmacht