This article deals with a section of the Rhine; for the Reichsgau planned during the time of National Socialism, see Reichsgau # Oberrhein (Baden, Alsace) . See also Upper Rhine Valley . 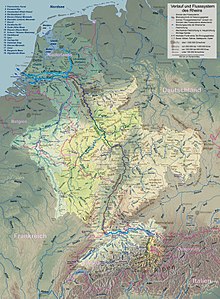 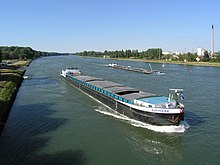 Navigation on the Rhine near Karlsruhe

Neighboring Basel are Switzerland , the French Alsace (in the Grand Est region ) and the southwestern German states of Baden-Württemberg , Hesse and Rhineland-Palatinate .

Around 35 million years ago, a 300 km long and 50 km wide fracture zone , the Upper Rhine Rift , was created between what is now Basel and the Hessian Basin . The cause were tensile stresses in the earth's crust and in the earth's mantle , which went hand in hand with the unfolding of the Alps . The ditch was partially filled up again due to sedimentation of the Rhine and its tributaries . At the edges, the so-called grave shoulders stood out, Black Forest and Odenwald in the east, Vosges and Palatinate Forest in the west. As a result of the subsidence, the so-called Aare-Sundgau-Strom was diverted to the north to the original Rhine ; Until the beginning of the Pleistocene around 2.6 million years ago, it had flowed further west from what is now Basel into the lowlands of the Saône and Rhone rivers .

Today, the Basler marked Rheinknie (so-called Middle Bridge in flow kilometers 166.6; medium outflow of the Rhine at the level Basel-Rheinhalle MQ = 1.040 m³ / s from annual number 1997-2018) the transition from the high to the upper Rhein with change in the main flow direction to the north and the change in the landscape from the relatively small, chambered layered plain of the Upper Rhine to the broad rift zone of the Upper Rhine Rift. The two strongest tributaries flow from the right into the Rhine, the Neckar (MQ = 145 m³ / s) in Mannheim and opposite Mainz the Main (MQ = 225 m³ / s). From left open at Strasbourg the Ill (MQ = 54 m³ / s) and in the northwest corner of the Oberrheingraben in Bingen, the Close (MQ = 30 m³ / s). There, at river kilometer 529.1 (MQ = 1,610 m³ / s), begins with the entry of the Rhine into the low mountain range threshold of the Middle Rhine (for further data see: river system of the Rhine ).

From 1685, the Upper Rhine was partially relocated under Louis XIV and parts of the Alsatian Rheinaue were drained in order to gain agricultural land. The eastward shifts of up to 1.5 km led to land losses in Baden by 1850. Around 1790 large parts of the Rheinaue were deforested to gain arable land, fields and grassland. From 1817, under the direction of Johann Gottfried Tulla, in the course of the straightening of the Rhine, the river, which is strongly branched in the upper part and meandering relatively slowly further down, was transformed into a stretched and much faster flowing river, which is flanked by dams. The shipping route and the course of the Upper Rhine were shortened by 81 km. As remnants of the original river and the meadow landscape , the old Rhine arms or so-called Gießen were preserved.

North of Basel , the main quantity of water of the river Rhine is the running on the French side Rhein side channel ( Grand Canal d'Alsace ) supplied. It starts shipping traffic and passes four run-of-river power stations . The state border (Talweg Märkt to Breisach) follows the old, already straightened course, the so-called rest of the Rhine (actually it is the real Rhine). At Breisach it flows together again with the Rhine canal. Between Breisach and Iffezheim , its water level is regulated by four further barrages , each with its own river loop branching off to the left (so-called loop solution ) and the two barrages at Gambsheim and Iffezheim, where the locks, power station and weir are in one axis. All barrages consist of two locks and a hydroelectric power station . They each correspond to a further weir in the old, right-hand Rhine bed (with the exception of Gambsheim and Iffezheim). A height difference of 132 m is overcome over a distance of 170 km. A total of ten barrages have to be overcome from Basel to Iffezheim: Kembs / Ottmarsheim / Fessenheim / Vogelgrün / Marckolsheim / Rheinau / Gerstheim / Strasbourg / Gambsheim and Iffezheim as the only German barrage

The expansion of the Upper Rhine goes back to the Versailles Treaty , with which France obtained the right in 1919 to draw water for the purpose of hydropower in the joint border stretch between Basel and Neuburgweier / Lauterbourg.

Barrages on the Upper Rhine

The Upper Rhine Correction (1817–1876), the construction of the Rhine canal (1928–1959) and the dam regulation (1961–1977) lowered the groundwater level by up to 16 m, which had a strong influence on flora and fauna . In addition, the Rhine lacks bed load because of the barrages . Since the erosion force is still present below the Iffezheim barrage, a gravel-sand mixture with an average grain diameter of around 20 mm, which corresponds to the local bed load transport capacity , has been dumped since 1978, an average of 173,000 m³ per year. For this purpose, two motorized folding barges and a high-precision survey ship (DF ship Kriemhild) are used. This counteracts major erosion of the sole.

On the left side of the Rhine the landscape is called Ried and consists of the Petit and Grand Ried .

The numerous wetlands of the floodplains on the Upper Rhine are of particular importance for nature conservation : There are many nature , landscape and bird sanctuaries here . Between Weil am Rhein and Karlsruhe, 25,117 ha in Germany and 22,413 ha in France have been protected under the Ramsar Convention over a length of 190 km since 2008 . The largest nature reserve in Hesse, Kühkopf-Knoblochsaue , is located on the Upper Rhine, as is Taubergießen , one of the largest protected areas in Baden-Württemberg. Other Ramsar areas are located on the so-called Inselrhein between Mainz and Bingen.

The coordinated mosquito control on the Upper Rhine in the floodplain areas is carried out by the municipal action group to combat the Schnakenplage e. V. (KABS).

In 2005, the study Regional Climate Analysis of the Southern Upper Rhine Region (REKLISO) was published for the southern part of the area on behalf of the Regional Association of the Southern Upper Rhine , funded and accompanied by the then Ministry of Environment and Transport Baden-Württemberg , and in June 2006 in Freiburg by the former State Environment Minister Tanja Gönner (CDU) presented.

On January 29, 2018, the Atmo-VISION project was launched as part of a kick-off event in the town hall in Kehl : The associations and organizations involved from Germany, France and Switzerland (e.g. the Eurométropole de Strasbourg , the Baden Environmental Agency) -Wuerttemberg (LUBW), the Grand Est region and the Eurodistrict Strasbourg-Ortenau ) deal with the issues of air , climate and energy generation in the Upper Rhine region and want to jointly present strategies for the reduction of pollutants and greenhouse gases in the region by 2020 .

The Integrated Rhine Program (IRP) is an extensive flood protection project (initiated by Baden-Württemberg in 1982) along the southern Upper Rhine, with the aim of reducing the flooding of the Rhine, especially for cities below the Iffezheim barrage, and removing the peaks from their crests . In addition, with the construction of polders and retention areas and (dike relocation) the vegetation of the softwood and hardwood meadows that used to prevail is to be restored.

Ordinance on Securing the Reich Border on the Upper Rhine of August 31, 1939 (German Reich)

Landscape of the year