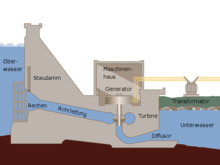 Scheme of a run-of-river power plant

The Hengstey run-of-river power station between Herdecke and Hagen

In 1767, the English civil engineer John Smeaton made the first cast iron waterwheel. In 1853 electrical energy was generated on a small scale at Niagara Falls , and at the end of 1895 the Edward Dean Adams power station , the world's first large public power station for the generation of alternating current , went into operation. In 1880 the first private small hydropower plant owned by British industrialist William George Armstrong went into operation for electric lighting in his country house, Cragside . In 1886, the Thorenberg power plant , which produced alternating current, was built in Switzerland and is considered the beginning of public electrification in Switzerland.

In Austria, under the inventor Friedrich Wilhelm Schindler , a small hydropower plant was built as early as 1884, from which the Vorarlberg power plants later developed.

The International Electrotechnical Exhibition , which took place from May 16 to October 19, 1891, was the breakthrough for the first three-phase transmission , the river-generating power station was located in Lauffen am Neckar .

Bavaria's second oldest run-of-river power plant in Schöngeising has been in operation since 1892. It was designed by Oskar von Miller and took two years to build. It was built on the site of a mill on the Amper that was offered for sale . The street lighting in the nearby district town of Fürstenfeldbruck was supplied with electricity from initially two Knop turbines . With three Francis turbines from 1911/22/27 and two generators (1922/27), the power station of Stadtwerke Fürstenfeldbruck has been providing energy for the district for over 120 years. The average annual working capacity is 2000 MWh. The historic Amperkraftwerk is a listed building and can be visited as part of a guided tour.

The Stallegg river power plant is located in the Wutach Gorge below Göschweiler and can be reached via the Schluchtensteig . It was put into operation in 1895. Before the Rheinfelden power plant , which has since been demolished, it is the third oldest river power plant in Germany and is a listed building .

In 1895 there were already 88 power plants in Switzerland. A 1895 planned water and electricity works , the Girard turbines were powered by a side channel of the Wutach, was in January 1896 in Wunderklingen in operation. It was replaced by a modern plant in 1971.

The river water is passed through a water turbine , which converts the potential energy of the water into mechanical rotary motion . This rotary motion drives a generator . In order to increase the height of the water falling, the river water is dammed up using a weir system . The water level in the resulting backwater is kept constant during operation. The height of fall as the difference in height between the upstream and downstream water and the amount of water that has been developed determine the installed capacity and the work capacity of the power plant. A diffuser at the outlet of the water turbine increases the efficiency for a given height difference, but also increases the risk of turbine damage due to cavitation due to its vacuum formation . Kaplan and Francis turbines are commonly used to drive the generator . The torque from the turbine is transmitted to the shaft of a generator either directly or via a gearbox. The generator converts the mechanical energy into electrical current.

Other components depend on the size and type of the power plant.

Since the height of fall is usually low, it is of the low-pressure power plant type. Their performance is mainly achieved through large flow rates. Saving and thus regulating flow and electricity production is only possible in special cases.

In run-of-river power plants with threshold operation , the water is collected in the storage space for a few hours and only drained via the turbine at certain hours. This means that the turbine can be operated with optimum efficiency. This also gives you the option of generating electricity primarily when it is needed. Since the surge operation lets the underwater fall dry during the accumulation phase and can thus cause considerable ecological problems, it can only be approved in Germany today with an equalization basin below .

In the case of a diversion system , the water dammed up by the weir system is directed to the power house via a canal or tunnel, which is not located directly at the weir system. The diversion usually shortens the course of the river considerably in order to gain more head. At the Inn power plant near Imst, for example, a 12.3 km long pressure tunnel cut off the loop of the Inn near Landeck, thus achieving a fall height of 143.5 m.

The water pipeline power plant Gaming in Gaming ( Lower Austria ) is a specialty . The water of the second Viennese high spring water pipeline overcomes a gradient of 220 m between Lunz am See and Gaming. The water is used to generate electricity via a 600 m long pipeline and then continues on its way to Vienna .

This type is also known as an expansion turbine , which is often used in the drinking water system. The pressure difference in the pipeline system between the elevated tank and the distribution system is used here. The use of pressure reducers can be dispensed with and part of the energy required to pump the water into the elevated tank can be recovered.

The Austrian Federal Forests have been operating a new potable water power plant with 68 kW output in Hallstatt since 2018 , which has been structurally integrated into the small hydropower plant (CHP) Hallstatt (4.7 MW output).

The so-called bay power plant is very often found, which is a special form of block construction. In this case, the power plant is located in an artificial bay on the natural course of the river. The arrangement on the debris-free outside of a river bend can also make sense. The advantage of this construction is that the river cross-section is not narrowed and any floods that may occur can drain off safely.

Water wheels are the oldest form of run-of-river power plants. Since they have efficiencies comparable to those of turbines at low heads and small amounts of water, they are still used today. Water wheels can run without regulation, without a dam and even with strongly fluctuating water volumes without any significant impairment of the efficiency. Therefore, under certain conditions, they can have a higher annual work rate than turbines. 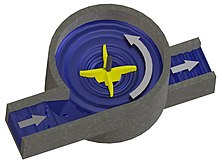 The smallest form of a small hydropower plant is currently the water vortex power plant . With this type, water is branched off from a flowing body of water with the help of a short concrete ramp and fed to a circular concrete basin with a drain. The resulting water vortex drives a specially shaped vortex rotor, which generates electricity through the resulting torque.

A flow power plant is a hydropower plant that does not require a weir system. It only uses the hydrokinetic energy contained in the motion of a flowing fluid to generate electricity. Due to the lack of transverse construction in this type of power plant, the landscape is only slightly or not at all impaired.

The power buoy and the ship mill are special forms of flow power plants .

Hydropower screws get by with small amounts of water and small differences in height, but are also used on steep slopes. The amount of water can vary greatly.

Also shaft power plants are suitable for very low head. Its simple technology makes it suitable for decentralized systems in developing countries. A DIVE turbine is used . The Technical University of Munich is optimizing this type of building in its research facility in Obernach .

In order to maintain the navigability of the river despite the interruption of the watercourse by the weir system, locks must be built. Due to the storage space, shipping above the weir is mostly made easier or even made possible by increasing the water depth. By stringing power plants together with the corresponding dams , waterways can be made passable for larger ships.

Run-of-river power plants generate electricity from renewable energy . Often, however, there are massive interventions in the environment through construction and operation, which can lead to sustainable changes in ecology. Eels in particular suffer from the extremely fast rotating turbines. The typical consequences include, among other things, the loss of natural river dynamics, a reduction in the transport of gravel, the failure of ecologically important floods and a resulting reduction in nutrient input into adjacent floodplains.