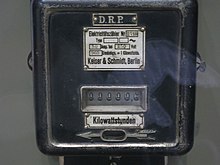 AC electricity meter from 1913, which gives its result in kilowatt hours.

The watt-hour (unit symbol Wh ) is a unit of measurement for work or energy . Although it does not belong to the International System of Units (SI), it is approved for use with the SI. This makes it a legal unit of measurement . One watt hour corresponds to the energy that a system (e.g. machine , person , incandescent lamp ) with an output of one watt absorbs or emits in one hour . A 50 watt incandescent lamp that lights up for one hour converts 50 Wh.

The kilowatt hour ( kWh ), a thousand times the watt hour , is common and widespread in everyday life . In this unit, electricity costs in particular, but also heating costs are billed and recorded with measuring devices such as the electricity meter or heat meter .

When specifying the electricity production of power plants or the demand for electrical energy of entire countries, the prefixes Mega (M) (for one million ), Giga (G) (for one billion ) or Tera (T) (for one trillion ) of the corresponding unit used to get more manageable numerical values. Examples:

Connection with other units of energy

The watt hour is derived from the SI unit joule :

For example, if a solar system with an output of one kilowatt converts sunlight into electrical energy for one hour, it delivers one kilowatt hour.

With the energy 1 kWh you can for example:

For comparison, the following rule of thumb for the energy content of primary energy sources is worth mentioning:

depending on the efficiency of the power plant and power line, only around 40% reach the consumer.

Although the unit kWh is mainly used for electrical consumers or heating, it can also be compared with the energy consumption of a person : a typical daily turnover of 9000 kJ for an adult man (without heavy physical work) would correspond to a value of 2.5 kWh . Thus it has an average consumption of around 100 watts, whereby the converted per capita primary energy requirement in Germany is around 5000 watts, i.e. 50 times as much. With the energy of 1 kWh from the example above, a person weighing approx. 80 kg can walk 10 km.

A megawatt day (MWd) is the energy that a power plant with an output of 1  megawatt delivers in one day . It is used in energy and reactor technology.

A gigawatt year (GWa) is the energy that a power plant with an output of 1 gigawatt delivers in one year (when operated without interruptions). The gigawatt year is not a legal unit in metrology in Germany because the year (unit symbol: a) is not such a unit there.