Polder meadows near Schwedt between the branches of the Oder 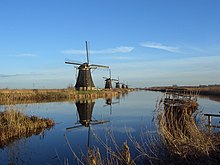 (Pump) mills on the dike of the Overwaard-Polder near Kinderdijk

A polder is a diked, low-lying area near water. There are two opposing meanings in relation to flood protection .

In the classic Dutch meaning, especially in the area around the Ems estuary and on the lower Oder, also used in German, in Normandy also in French, a polder is an area that is itself protected from flooding by dykes . In most of these polders, the water level of neighboring larger bodies of water (sea or rivers) is often or permanently above ground level. That is why the water from the polder's drainage ditches has to be pumped over or through the dike , in today's times mostly with engine power, in pre-industrial times with wind power . The groups of windmills on the dykes of the Rhine Delta, a symbol of the Netherlands, are old wind pumps . In Schleswig-Holstein the classic polders are known as Koog . The word Groden, which is common in Lower Saxony , actually refers to the foreland of the dike, but was retained as a name in many places after the areas were dyed.

A flood polder is a retention area that can be flooded in a targeted manner during river floods in order to temporarily reduce the flow of water in downstream sections of the river and thereby reduce the peak of a tidal wave. Such polders are subject to usage restrictions, such as a building ban. They are separated from the river bed as well as from neighboring, more intensively used areas by dikes.

The dikes leading to more intensively used neighboring areas prevent them from being flooded when the polder is flooded. Dykes leading to the waterway improve the usability of the polder area by preventing the polder from being flooded at low floods that do not pose a threat in subsequent sections of the river. They enable the water withdrawn from the river to be retained longer than in a naturally flooded flood plain. Such polders are primarily created for flood protection in large cities and narrow valleys in spacious valley sections above, for example on the Upper Rhine near Ingelheim am Rhein .

In the case of less large bodies of water, flood polders are designed as retention basins - when empty if necessary , as in the Leinetal between Northeim and Einbeck - Salzderhelden . Here a dam, through which the river normally flows unhindered through an open gate at the base, blocks the river valley. During floods, the tidal wave is dammed here and the runoff is regulated to a level that is compatible with the lower reaches.

In waste technology, polder refers to a pit into which waste is brought to be deposited, or a corresponding dumping of waste in a landfill . The parallel to the polder in hydraulic engineering is explained by the fact that a landfill is usually (often invisible) diked in order to collect and clean the runoff from it.