On a landfill are wastes deposited in the long term and with a few exceptions disposed of .

In addition to landfilling, waste recycling , waste incineration and dumping are also used. 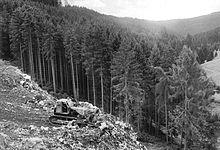 Construction of a landfill in Hawaii 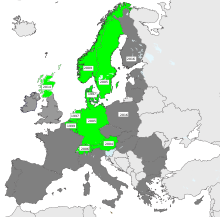 In some European countries there are bans on landfill for certain types of waste such as B. household waste , d. H. the non-recyclable waste has to be (pre-) treated, mostly incinerated .

Compaction with a compactor

In Germany, all waste and waste mixtures with an organic content of over five percent must be treated in accordance with the provisions of the Landfill Ordinance (DepV) before being deposited. The allocation of waste to differently equipped landfill types takes place according to the Landfill Ordinance and thus according to waste law . A permit under the law on waste is required for the construction of rubble and ground landfills (inert waste landfills) (landfill class DK 0). To set up underground storage (DK IV) is a mining law approval required. For all other landfills, a plan approval procedure under waste law is sufficient and necessary.

Since the middle of 2005, household waste dumps have only been allowed to accept pre-treated waste from which organic components have been almost completely removed. Class I, II and III landfills are exclusively reserved for mineral waste. These landfills have a mineral bottom liner and leachate - drainage system . Class II and III landfills have a mineral seal and a plastic sealing membrane (PE film) on the base; Here, too, a seepage water drainage system is installed to collect and drain off seeping liquids. The structure of the DK-II and III landfill is also called a combination seal .

In Germany, landfills must be set up, operated and monitored in accordance with the Landfill Ordinance of April 27, 2009. It came into force on July 16, 2009. It defines landfill classes (DK) from which different requirements for operation and in particular for decommissioning and aftercare follow. The structure of the landfill is decisive for determining the landfill class. The waste is analyzed and, depending on the pollution, deposited on the respective landfill class.

The Landfill Ordinance provides for five landfill classes for above-ground disposal (depending on the hazardousness of the waste to be deposited).

Landfills for inert waste , e.g. B. unpolluted building rubble and unpolluted soil. Class 0 landfills must have a geological barrier at least one meter thick and a mineral drainage layer 0.3 meters thick. Above-ground landfill for inert waste that complies with the allocation values ​​of landfill class 0 according to Appendix 3 of the Landfill Ordinance. DK 0 will be introduced for waste that is classified as inert in accordance with Section 3 (6) of the Recycling Management Act. As a rule, a planning approval process is required for approval and there is no need to submit an emissions declaration.

Landfill classes I and II

These are landfills for "non-hazardous waste", including treated (incinerated or rotted ) household and commercial waste, industrial waste and storage materials that do not require any special monitoring. 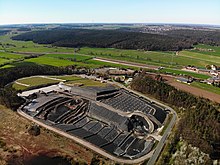 They are above-ground landfills for waste that contains a higher proportion of pollutants than that which may be deposited in a class II landfill, and where the pollutant release in the leaching test is greater than in the case of landfill class II and to compensate for the requirements for the Landfill establishment and landfill operations are higher. This includes landfills for hazardous waste with special monitoring needs. The geological barrier must be at least five meters thick. In addition, a seal control system is required. In this way, the tightness of the surface seal can be checked regularly during aftercare so that leaks can be detected and eliminated in good time.

In Switzerland , the new Waste Ordinance (Ordinance on the Avoidance and Disposal of Waste, VVEA) came into force on January 1, 2016. The total revision of the Technical Ordinance on Waste (TVA) was necessary in order to do justice to the changes of the past decades and to master the new challenges in Swiss waste management. The VVEA gives the avoidance, reduction and targeted recycling of waste a higher priority.

According to the VVEA, there are now five landfill types (compartments):

The respective (structural) requirements and limit values ​​are summarized in Appendix 5 of the VVEA.

The Austrian legislature differentiates between several types of landfill.

Since January 1, 2004, untreated residual waste may no longer be dumped in Austria. Exceptions were granted until December 31, 2008 with transition periods until June 30, 2009, as recycling plants had not yet been put into operation in all regions.

The disposal of landfill-suitable hazardous waste (hazardous waste) takes place in hazardous waste landfills . Particularly dangerous substances are deposited underground. Within the EU, the (Directive EU / 1999/31) which has been transferred into national law applies. There is a similar approach in Switzerland.

Construction of a landfill (according to the DepV)

A landfill consists of the following elements

Structure of the base seal

Structure of the surface seal (from inside to outside)

Landfill leachate has to be cleaned in a special treatment system, often in a biological pre-cleaning with subsequent activated carbon or in a reverse osmosis system . Only then can it be discharged into the next receiving water .

Landfill gas is only produced with biodegradable waste, not with inert waste. It needs to be captured and dealt with. The use of landfill gas for energy generation is promoted by the Renewable Energy Sources Act . If recycling is not possible, the landfill gas must be burned in a high-temperature flare. This can be the case if the methane content or the gas volume is too low for economical energy generation.

Fire in a landfill 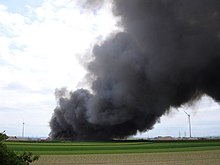 In particular, landfills with uncompacted organic materials can ignite themselves or catch fire from outside influences. If these fires are not discovered and extinguished quickly, they can penetrate deep into the mountain of rubbish and burn there as a smoldering fire for months and produce highly toxic exhaust gases. When fighting, water cannons often have to be used. Deeper fire nests can only be reached with fire lances . Such fires have become rare in Germany and only occur during the interim storage of waste.

Chemical reactions in slag landfills can lead to temperatures of up to 50 ° C, which can damage the HDPE base seal or other plastic components.

There is a fire hazard not only when landfill waste is fired. Major fires have also been recorded at the landfill gas power plants located on landfill sites.

Mercury, lead and cadmium form only a small part of the waste today due to the change in battery production and the separate disposal of batteries (see Battery Ordinance ), fluorescent lamps and compact fluorescent lamps , but are quite relevant in old landfills. Heavy metals , especially mercury , are metabolized in landfills to water-soluble salts . This means that highly toxic (often more toxic than the heavy metals themselves) compounds can get into the groundwater (→ Heavy metals # Biological properties and environmental effects ). Household waste leachate has only low concentrations of heavy metals.

More problematic substances from landfills are hydrocarbons from waste oil, paint residues, solvents , creosote (from coke ovens and railway sleepers ), and particularly the earlier commonly used halogenated organic substances and compounds (solvents and cleaning agents, Halon - fire extinguishers , PCB and dichlorophenol from plasticizers and insulating oil ). Only traces of these substances end up in landfills today; in old landfills they are a creeping danger, especially since landfills were previously created without any sealing. In addition, the type of material deposited was usually not documented in the past; records showing the exact location of such an old landfill were often not made or are no longer available. The detection, investigation and, if necessary, the remediation of such contaminated sites is usually associated with great effort.

Due to a sudden slide of the Koshe ("dirt") garbage dump near the Ethiopian capital Addis Ababa, which has been used for around 40 years, numerous huts have been spilled on the garbage dump itself and in the adjacent poor settlement, and with it at least 30 people, mostly people, who are looking for usable items in the garbage looking for, been killed.

Renatured garbage dump on the rubble mountain in Dresden

In order to minimize the impact on the environment, modern landfills have a "multi-barrier". Several barriers are redundantly present independently of one another in order to prevent damage even if one barrier fails. The barriers are structured hierarchically.

One way of building the side sealing of a landfill is the Vienna Chamber System , in which the sealing walls are designed twice and divided into chambers. It is a multi-barrier system that is technically simpler than high-density combination seals and, thanks to the narrow-wall design, more cost-effective. In addition, the landfill water and the tightness of the sheet piling can be monitored. The method is particularly suitable for the remediation of contaminated sites. 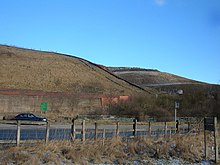 already covered mountains of rubbish from a landfill

In Germany, landfills are usually superficially recultivated after their closure . Elaborate technical precautions for covering, sealing, collecting leachate and landfill gas remain under the greening culture layer. In 2008 it was proposed to consciously design landfills as artificial landscape elements and make them publicly accessible.

Chemical, physical and biological processes take place in the landfill body. In a short first phase after the deposition, organic components of the waste are aerobically converted into carbon dioxide and water by the still existing atmospheric oxygen. Acid fermentation then occurs, and the pH of the seepage water drops to 6.1 to 5.5. This phase lasts for several months. Due to the low pH value, metals can go into solution that have remained stable at a higher pH value. During this phase, the chemical oxygen demand (COD) and biochemical oxygen demand (BOD) of the seepage water are also high.

Anaerobic methane fermentation begins after one year at the latest ; this can last over 20 years (depending on the TOC content in the waste and the water content). The pH value of the seepage water rises to 8.0 to 8.5. The chemical and biochemical oxygen demand falls and the concentration of leached metals decreases.

Around 2.5 billion tons of household and industrial waste as well as construction waste are stored in German municipal waste landfills. By dismantling the existing dumps, valuable materials can be obtained . The content of 750 million tons of household waste and household waste-like commercial waste without pre-turnaround waste (= former GDR) is estimated at a calorific value of 2300 TWh of energy, 26 million tons of iron scrap, 850,000 tons of copper scrap and around 500,000 tons of aluminum scrap. With an iron content of 3.4% scrap iron, 83 million tons of iron and 13 million tons of non-ferrous metals can be extracted from the entire landfill inventory . This is compared to an annual consumption in Germany in 2003 of 610 TWh electricity and 1.3 TWh oil, 21 million tons of scrap iron, 1.5 million tons of copper and 3 million tons of aluminum. Landfills alone could cover 58% of primary energy, 124% of scrap iron, 57% of copper and 22% of aluminum for one year. With high metal prices, urban mining could one day break even. Using the calorific value is not yet economically viable at the beginning of the 21st century. There are still no procedures for other ingredients such as phosphates. The dismantling itself and a controlled repositioning of the fractionated and inerted residues has been tried and tested on an industrial scale, which in turn reduces the aftercare costs. With regular aftercare costs between 5 and 25 euros per cubic meter of landfill, the costs for a new landfill drop to 45%. With high raw material prices and changed processes, there is a prospect of controlled dismantling with raw material use. Another aspect is the recovery and active reuse of the areas and the like. a. by planting. The reduction in landfill volumes is essential in the long term.

Landfill in the ecological sense

In a figurative sense, natural elements (water floor , soil ) or living beings in which an accumulation of toxins or impurities takes place are also referred to as landfills. In bioremediation , the capabilities of "landfill organisms" are used biotechnologically .