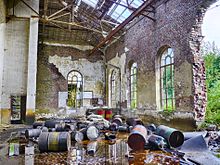 Improper storage on an industrial site

In environmental protection and spatial planning, the term contaminated site refers to a delimitable part of the earth's surface which, as a result of previous human activities , exhibits changes in the soil ( soil contamination ) or groundwater ( groundwater pollution ) that are harmful to health or the environment , whereby the minimum quality protected by legal norms is no longer given.

Running businesses are - at least in the industrialized world - mostly subject to strict environmental monitoring , so that no contaminated sites should accumulate.

"Contaminated sites within the meaning of this law are

Not all soil contamination is a legacy. If there are indications of contamination, for example due to use by an environmentally relevant company or the filling of a gravel pit with undocumented material, the area is initially designated as a suspected contaminated site and examined in more detail. For this purpose, a service provider is usually commissioned with a detailed historical survey of the use of the property, and the pollutant content of suspicious property areas is clarified by means of drilling and chemical analysis.

Often, due to a lack of documents, it is no longer possible to determine whether an existing contaminated site was originally due to a permit issued at the time, or whether it is a wild garbage dump - especially since there used to be far fewer safety requirements in the area of ​​waste disposal or the processing of chemicals. This difference is irrelevant for the definition of the term contaminated site.

"§ 2. (1) Contaminated sites are old deposits and old sites as well as soils and groundwater bodies contaminated by them, which - according to the results of a risk assessment - pose considerable dangers to human health or the environment."

Old deposits within the meaning of the law are “deposits of waste that have been carried out with or without authorization” (landfills), old locations are “plants in which environmentally hazardous substances were handled”. Contamination caused by emissions into the air ( air pollutants ) is not subject to the scope of the law, but to the Emissions Act Air 2018 (EG-L).

The reason is that the law is primarily aimed at financing the remediation or securing of a contaminated site, i.e. it deals with the questions of the liability of the former operator and / or landowner ( polluter and property owner liability ), because ultimately the federal government is liable for the remediation (§ 18 ALSAG; the competent authority is the governor ). Since the law came into force, there has been a clear regulation; in particular, the contaminated site contribution in waste management ensures financing even if the operating company is liquidated. The close link between the remediation of contaminated sites and land recycling is to be further strengthened with the 2019 amendment to the ALSAG.

"Polluted locations in need of rehabilitation."

Such loads can z. B. as dust, as deposits or as seepage of harmful substances.

The Contaminated Sites Ordinance distinguishes between disposal sites (closed or still in operation landfills and other waste deposits ), operating sites (disused or still in operation facilities in which environmentally hazardous substances have been handled, including shooting ranges and areas ), and accident sites (Art . 2 Z. 1 AltlV). Swiss law does not differentiate between historical “old” loads and systems that are still in operation, but emphasizes their operational reliability. A distinction is made between the contaminated sites in need of remediation and contaminated sites by builders , where remediation only has to take place when the property is converted or new buildings are built (with different rules for bearing the costs for remediation measures).

The polluter pays principle applies to the remediation of contaminated sites . Under certain circumstances, as a further development according to the police disruptor principle , the authorities can also oblige third parties such as the disruptor of the state (for example the property owner) to take measures or take these measures themselves (substitute action) instead of the perpetrator (behavioral disturber ).

Based on the Ordinance on the Charge for the Remediation of Contaminated Sites (VASA) is on movements of waste on a landfill , a landfill tax levied. The income from this incentive tax is earmarked for the investigation of polluted sites and the remediation of contaminated sites. The amount of the levy varies according to the type of landfill.

Classification as contaminated site and registration

The processing and reuse of an area suspected of being contaminated can usually only begin once it has been clarified whether soil or groundwater contamination actually exists and to what extent the risks arise from these pressures.

To do this, it is necessary to obtain as much information as possible about the usage history of a property or an industrial plant and then evaluate it,

If sufficient data and information on the suspected area are available within the scope of the recording, possible negative effects on the relevant protected assets (e.g. soil , water , human life and health) must then be shown in an initial assessment.

The results of the initial assessment will determine whether further investigations are necessary for the final risk assessment or whether there is already enough knowledge to prepare a remediation ( remediation investigation ) of the suspected area or the contaminated site in the next step .

The recording of suspected contaminated sites is well advanced in Germany; In doing so, more than 360,000 areas were recorded and documented in contaminated land registers at the district governments. The initial recording was generally based on historical research, in which businesses with suspicious activity and former sand or gravel pits were selected. An established suspicion of contaminated sites generally leads to a loss of value of the property, so that there is a need to clarify the suspicion with suitable investigations at the latest when there is a planned change of use or the intention to sell. Many contaminated site investigations are therefore triggered in the course of land recycling .

However, if the area is declared a contaminated site by the responsible environmental authority after a risk assessment, the next step is to decide whether to remediate or secure the damage. For this are

In Switzerland, the cadastre of polluted sites has been drawn up since the end of the 1990s and is operated jointly by the federal government and the cantons at the Federal Office for the Environment (FOEN).

There are a total of around 38,000 polluted locations, of which around 4,000 are likely to be in need of remediation (“contaminated sites” as defined by the law). Almost 40% of all polluted sites are dump sites, almost 50% operating sites, around 10% shooting ranges and ranges and around 1% accident sites. The investigations have not been completed; investigations into environmental impacts are being carried out at a total of 5,700 locations or will be tackled in the next few years. Around 2% of all locations are already being monitored, 5% have to be renovated.

The total area of ​​all recorded polluted locations is around 225 km 2 (this corresponds to the area of ​​the canton of Zug). The majority (two thirds) is in the central plateau with its dense population, one seventh (14%) in the Swiss Jura , the remaining quarter (23%) is spread across the rest of Switzerland.

Remedial measures are all measures that are suitable to restore a legally compliant condition. According to the claim of "healing" these can be:

The success of the renovation must be proven with suitable measuring methods, possibly with recurring measurements (the permanent effectiveness of the security).

The so-called old armaments hold a special position. This refers to areas that were used for the production of military goods ( explosives ) or that were used directly by the armed forces or that were contaminated by the effects of weapons. An inventory in the mid-1990s recorded 3240 such areas. The special position is based on the fact that the Federal Republic of Germany is directly liable if there is evidence of a direct consequence of the war.

Decontamination measures are basically divided into

At the BTU Cottbus there is a "Chair for Contaminated Sites". Until March 2012, the professor was Wolfgang Spyra . Since the 2013/2014 winter semester there has been a four-semester cooperative master’s program between the University and the Osnabrück University of Applied Sciences, “M. Sc. Soil, water, contaminated sites ”. The focus on "contaminated sites and soil protection" can be demonstrated here.