The following important information is missing from this article or section:
Legal, see discussion page - K @ rl 08:36, 19 Sep. 2018 (CEST)
Help Wikipedia by researching and pasting it .

A fire extinguisher is a portable small extinguisher with a total weight of a maximum of 20 kilograms. It is used to extinguish small and incipient fires and contains extinguishing agents that are ejected through stored pressure or pressure generated during commissioning.

A fire extinguisher from 1540 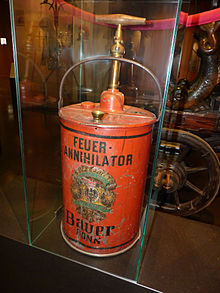 Centrifugal dry fire extinguisher from 1900 by the Clou company in Berlin. To use it, the lid had to be torn off and the powdery content had to be spread over the fire by throwing motions. 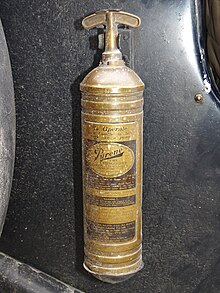 The Philipps Fire-Annihilator, patented by WH Philipps around 1850, and the Bauer'sche Fire-Annihilator at the end of the 19th century are among the historical forerunners . The latter weighed 7 kg when empty, 35 kg filled with a fire extinguishing compound dissolved in water.

On February 10, 1863, Alanson Crane was granted a patent in the United States for the fire extinguisher he had invented.

Another early predecessor of the fire extinguisher was invented by the Englishman George William Manby . The Minimax company founder Wilhelm Graaff (1872–1931) patented the first mass-produced fire extinguisher with the " pointed cone " and brought it onto the market in December 1902. The centrifugal dry fire extinguisher had no pressure vessels; the powder was applied to the fire by spinning the container.

The "Internationale Feuerlösch-Gesellschaft mbH" (later TOTAL Feuerschutz GmbH ) presented the first "quick dry fire extinguisher" in Berlin in 1912. This extinguishing device was patented in 1912 by the imperial patent office under the patent number "277836 vz B. 1912 compressed gas fire extinguisher with an extinguishing gas used as a pressure medium". It can be seen as the forerunner of all modern, mobile fire extinguishers and thus revolutionized fire fighting.

The Komet process for the production of extinguishing foam , patented by Clemens Wagner in 1932 , was further developed by Total.

Carbon tetrachloride in the fire extinguisher

The liquid, low-reaction carbon tetrachloride (CCl 4 , also known as tetrachloromethane) was filled into pressureless hand pumps made of brass or chrome at the beginning of the 20th century . When the fireplace was sprayed, the carbon tetrachloride evaporated and produced an oxygen-displacing gas cloud. Until the 1950s, the fire extinguisher with carbon tetrachloride was used for liquid and electrical fires, until harmful effects on the nervous system and internal organs were found.

Carbon tetrachloride, like halons in Germany, was subject to the CFC-Halon Prohibition Ordinance , which came into force in 1991 and was replaced by the Chemicals-Ozone Layer Ordinance in 2006 .

Fire extinguishers according to the previous standard DIN 14406-1… 3 will continue to be approved in Germany.

The test objects are graded as follows: In the event of a fire, the

According to EN 3-7, fire extinguishers have five writing fields:

Halons were also used as extinguishing agents until the mid-1990s , but their use has been prohibited since then because of the extreme damage to the ozone layer , see the Montreal Protocol . 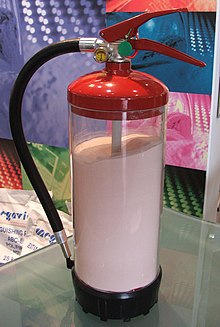 According to the architecture of the pressure generation, one differentiates between the following types of fire extinguishers:

The advantage of this design is the low technical effort, which is why these extinguishers belong to the inexpensive standard class. The disadvantage is that the extinguishing agent container is constantly under pressure (thus subject to pressure container legislation). This means that there is a risk that the propellant gas will escape unnoticed due to minor leaks in the extinguisher (so-called creeping gases) and the extinguisher will become inoperable. Likewise, the life expectancy is around 20 years (assuming regular maintenance) and, due to the technology used, maintenance costs are slightly higher than for rechargeable extinguishers.

Another possibility of pressure storage are so-called "gas extinguishers", in which the extinguishing agent ( carbon dioxide , CO 2 ) is also the propellant.

Extinguishers with chemical pressure generation are no longer provided for in the current EN 3 standard and should now be taken out of service everywhere. In the past, chemical pressure generation was mainly used for water and foam extinguishers: alkaline salts were dissolved in the extinguishing agent; To start up, an acid ampoule was smashed with a push button - the subsequent chemical acid-base reaction led to the formation of carbon dioxide , which acted as a propellant.

The following abbreviations for pressure generation are no longer prescribed in EN 3. They can therefore no longer be found on newer fire extinguishers and therefore only have historical significance:

1 Risk of fire spreading
2Risk of violent, u. U. explosive reaction
3Risk of fat explosion
4th The identification with code letters is no longer in accordance with the standard.
5 Extinguishing fires involving gaseous substances released under pressure is difficult and only possible with special fire extinguishers, the occurrence of which tends towards zero today.
6th Some grease extinguishers are also available for ABF classes.

The duration of the function is the time in which the extinguishing agent continuously exits with the interruption device fully open.

At least a 2 kg extinguisher should be carried in cars , as an inexperienced person can hardly achieve an extinguishing success with a smaller filling quantity. The fire extinguisher should be stored within reach (e.g. under the passenger seat), as restricted access (e.g. in the trunk) delays the start of use and the fire can spread further.

In Germany, fire extinguishers must be provided in locomotives and passenger coaches that meet the requirements for electrical systems and are operational at least from −20 ° C. In most cases, 6 liter foam or water extinguishers are used.

In the event of an aircraft fire (e.g. in the cabin ), one must always remember to extinguish the fire very specifically, as the extinguishing time of a 6 kg extinguisher is only about 20 seconds until it is completely emptied. Even smaller extinguishing agent containers are often carried in small aircraft.

In aircraft, sources of fire are ideally extinguished from an extinguishing distance of around 70-100 cm. In the case of airplanes, it should be noted that after the use of CO 2 extinguishers, dizziness can occur after exposure times of 30 seconds (assumed concentration: 10%), which can impair safe further flight.

In Austria - in addition to the above standards - the TRVB F 124 is decisive.

Since January 2008, it has been mandatory for fire extinguisher operators in Germany to also have them checked by a person who has been trained in accordance with TRBS 1203/2 and who is qualified to inspect them in accordance with the Industrial Safety Ordinance .

According to these standards, a fire extinguisher must be checked for function no later than two years (special regulations must be observed).

The main purpose of maintenance is:

After proper maintenance, the fire extinguisher receives a maintenance certificate.

Triggered fire extinguishers must be handed over to appropriate specialist companies to restore operational readiness.

Other extinguishing agents and systems