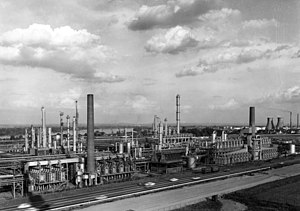 Petrochemical plant of the former Rheinische Olefinwerke in Wesseling (1967)

The plant is in the art a well-planned and systematic compilation of standing spatially associated apparatuses , devices and / or machines , the functional , control engineering or safety may be joined together.

Especially in industry , plants ( industrial plants ) shape the image of a business premises as systems . Systems are extensive technical resources that consist of several technical components . They are characterized by the fact that they are process-technically dependent on one another and connected to one another, so that the failure of a part of the system can affect the entire system. This interdependence can therefore lead to complex operational disruptions. To synchronize a system, there is a control device that influences the production process. The plant created such systems using the plant technology , that is the sum of the necessary technical know-how for the production of plants.

Systems for installations on buildings and shelters

Important systems for apartments include heating systems or solar systems .

Since there is no uniform term for a facility in existing environmental law , a more detailed legal definition of the term facility in the UmweltHG is necessary. The UmweltHG is based on the assumption of no-fault system liability for environmental impacts . If, according to Section 1 of the UmweltHG, someone is killed or injured or something is damaged by an environmental impact caused by a system, the owner of the system is obliged to compensate the injured party for the resulting damage . In order to be able to specifically regulate the scope of application of the UmweltHG, a definition is therefore contained in Appendix 1 to § 1 UmweltHG and in § 3 UmweltHG. According to § 3 UmweltHG, plants are fixed facilities such as production sites and warehouses; the plants also include machines, devices, vehicles and other portable technical facilities and ancillary facilities that are spatially or operationally related to the plant or a part of the plant and for the creation of Environmental impacts can be significant. In Appendix 1 to Section 1 of the UmweltHG, plants are listed according to the relevant economic sector .

The Accounting Law is one in § 266 para. 2 A II no. 2 HGB the technical equipment and machines for fixed assets on the assets side of the balance sheet . This rule can be found in International Accounting Standard 16 , of the tangible assets ( english property, plant and equipment ) is concerned. Technical systems and machines include all equipment used directly in production ; all equipment that is not directly used in production is accounted for as "other equipment, factory and office equipment ". Even if the components of an installation can be movable objects , they form a whole because of this financial relationship .

As an economic key figure, the asset intensity reflects the ratio of tangible assets to the company's total assets .

The higher the key figure for the system intensity, the greater the proportion of operational systems in the total assets of a company. Plant-intensive operations have a high plant intensity and are subject to the risk of being exposed to underutilized capacities with fluctuations in the level of employment, resulting in idle costs . In particular, fixed costs such as interest expenses and depreciation are wholly or partially no longer generated from the sales process in the event of underemployment and can lead to losses (so-called operating leverage ). These fixed costs constantly force the company to fully utilize its capacity so that the fixed costs of fixed assets are distributed over the largest possible number of products and therefore kept as low as possible for each product ( unit costs ) ( fixed cost degression ). Conversely, a low system intensity can cause capacity bottlenecks in production, be due to investment backlogs or sale-lease-back . The lower the investment quota, the more flexibly a company can adapt to changed market developments . The system intensity is therefore also a measure of the adaptability or flexibility of a company.

The system intensity is very sector- dependent, which is why it can fluctuate between 10% and 70% depending on the sector. The most asset-intensive companies include the machine-intensive manufacturing industry , transport , infrastructure or telecommunications companies, as well as airlines . A very low system intensity can be found in trade and in the construction industry , because the production factor labor predominates here (see labor intensity ).