In contrast to total costs , unit costs , also known as average costs, are generally understood to mean the costs per unit of a good . In business administration and economics, there are sometimes different definitions and uses of the term.

One aspect of the unit costs is the unit wage costs , which as a measure between workload and production are an indicator for personnel-related productivity , also for economic analyzes.

Costs are related to a quantity or unit volume cost . The amount of the unit costs depends on the cost allocation principle used . As part of cost unit accounting (part of cost and performance accounting ), they are used, among other things, to calculate the lower price limit. 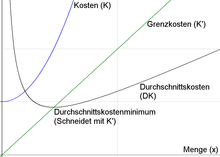 The unit costs can - like most other types of costs - be divided into fixed and variable costs :

: variable unit costs, based on the production volume

A simple method of determining the unit costs is to divide the total costs (variable costs and fixed costs ) by the production quantity :

The problem here, however, is the allocation of the fixed costs to the products, although these are independent of the production volume. More advanced methods of calculating unit costs are:

An increase in the quantity produced leads to a change in the variable unit costs and, as a result, also in the total unit costs. The level of the slope depends on the variable factors of the production process and its costs. Unit costs are closely related to economies of scale : “The larger the number of units in a company, the lower the average costs.” This relationship describes increasing economies of scale.

As a total average cost is defined as the costs incurred in full extent per unit produced, that is the sum of the fixed and average variable cost. They result from dividing the total costs by the associated output .

Fixed costs also arise when there is no production. They are completely neutral towards the output, which means that they do not change with the variation in the output quantity, i.e. they remain the same. To calculate the average fixed costs , the fixed costs are divided by the reference value.

“Since the fixed costs are constant, the average fixed costs decrease when the output increases.” Consequently, one can say that the larger the output volume, the lower the fixed average costs. “This relationship is called fixed cost degression . The so-called law of mass production describes the degressive course of the unit costs per unit. "

The importance for the company

Average costs serve as an information basis for the pricing policy and success control of the company. Since costs are incurred in the production of goods , companies must try to cover these with the revenues and, if necessary, to exceed them. The size of the contribution margin is of great importance here. It is defined as the difference between the revenues and the variable costs. “The contribution margin combines cost-based thinking with sales-driven thinking. The starting point is the net proceeds of a product. The variable costs of the product are compared with this net proceeds. ”With the help of this figure, one can assess the extent to which the company is able to cover the fixed costs.

In order to be able to judge whether and how much is being produced, the average costs are a very important variable. But the division into short and long term is also important here. “For the offer of the entrepreneur - this is shown in connection with profit maximization - those costs are decisive that the production of an additional unit of quantity of the good causes. These costs are referred to as marginal costs or marginal costs (GK). "

The comparison of the marginal costs with the variable and total average costs is crucial for a correct decision of a company that wants to withstand the competition in the market. On the basis of this comparison, the companies can find out what effect each additional unit or each smaller amount has on the contribution margin and profit.

But also what effects a variation in price has on these two important variables. As a result, companies can use it to control their success and make optimal price decisions.