This article applies to productivity as an economic metric. For productivity in linguistics, see word formation # classification options .

Productivity is an economic indicator that describes the relationship between the goods / services produced and the production factors required for them .

The economic subjects ( private households , companies and the state with its subdivisions such as public administration , state-owned companies , municipal companies ) are required to deal rationally with scarce resources ( rational principle ). This also includes productivity as the sum of productive measures taken by economic entities and their behavioral patterns , usually related to a system or a production process with production factors and products . Measured against the rational principle, everything can be classified as productive if the resources used are in a favorable relationship to the effect achieved. Conceptually, productivity is closely related to constructiveness and the opposite of destructiveness .

In economics and business administration , productivity is understood to be an economic or business indicator that reflects the (quantitative) relationship between what is produced ( English output ) and the means used for this in the production process (production factors, English input ).

In order to meet these requirements, a given output ( minimum principle ) can either be achieved with the lowest possible input or the largest possible output ( maximum principle ) with a given input . This means that productivity is also a specific expression of the rational principle. Maintaining productivity as a behavioral maxim also enables the goal of maximizing profit or maximizing utility to be achieved . There is thus target harmony between these goals .

Difference between productivity and profitability

While productivity deals with the comparison of output and input, profitability relates costs / effort to income / revenue . The economics are therefore value-based sizes based on productivity, however quantitative .

The overall productivity in companies is determined using the following formula:

Since the goods / services produced are of very different types and the composition of production according to different goods can also change over time , it is necessary to value the different goods with prices in order to be able to specify the total output as a one-dimensional quantity. For this purpose, the goods are valued at market prices , if such exist . Goods for which there are no market prices are valued at production cost . Furthermore, pure price changes are deducted from the output with the help of price adjustment procedures. One method is to calculate in constant prices for a base year.

Productivity can be broken down according to the different production factors:

When determining the factor productivity, the amount of goods produced is set in relation to the input amount of a factor.

In neoclassical theory , the assumption applies that the factors of production are rewarded according to their productivity - which does not mean that this also happens in practice. The reasons for this can be found in market errors and externalities. With the help of the statistically measured productivities it can be checked whether this is the case.

The best known and most widely used factor productivity is labor productivity . This is mainly due to the fact that the amount of work used is easier to determine than, for example, the wear and tear or the stock of the capital employed, i.e. machines, buildings and (when considering overall economic productivity) infrastructure facilities.

The economic formula for labor productivity per hour worked is:

The economic formula for labor productivity per employed person is:

The economic hourly output results from the comparison of sales volume and hours worked:

If the sales volume increases with constant working hours, the productive hourly output has improved and vice versa.

The Federal Statistical Office shows capital productivity by comparing the gross domestic product at constant prices (most recently in 1995) to the capital stock . The latter is the gross fixed assets also calculated in constant prices.

The addition of different types of capital to a total capital stock is based on dubious assumptions that have been criticized in the course of the capital controversy . 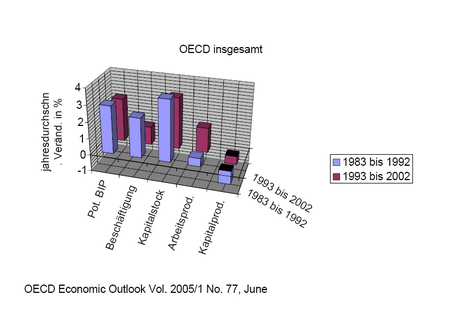 According to OECD , Economic Outlook No. 77, June 2005 the following results:

Employment grew an annual average of 2.4% and 1.1% in these specified periods. So employment growth has slowed in the OECD.

A long-term decline in capital productivity is problematic, as this means that in the long term the overall economic return on capital (capital income in relation to the capital stock) can only be maintained if the share of labor income in GDP is reduced, although this would of course end at the latest when this wage share would have reached zero.

In addition to the previously considered average productivity of the factors, their marginal productivity is also of economic and economic interest:

In most cases one assumes a positive but decreasing marginal productivity, i.e. H. if the input is increased, the output will increase. However, the amount of the increase decreases with the increasing starting level of the input (see Income Act ).

Mathematically, the marginal productivity of a factor can be determined as a partial derivative of the production function according to this factor.

Empirically it can be observed that the growth in output Y can not only be explained by the growth of inputs labor A and capital K, but that an inexplicable remainder remains, so to speak. That part of the growth rate of Y that cannot be explained by changes in the amounts of A or K input is called the total factor productivity . It can be interpreted as a measure of technical progress that ensures a growth in output Y regardless of the use of production factors.

In a study, the importance of different location factors for the total factor productivity of a region was examined using data from 257 regions of the EU. For the analysis, potentially influencing properties of the regions were taken into account, such as B. the degree of specialization in the field of manufacturing , settlement structure , population density and the economic development level of the region. Had the strongest positive influence on the total factor productivity of a region (in descending order):

The degree of specialization in manufacturing and the annual average temperature had a negative impact .

Above is the equation of labor productivity:

The data used are published by the German Federal Statistical Office and can be found in the WP under the keywords GDP and volume of work (abbreviated AV). The annual increase in labor productivity ( ) is also given.