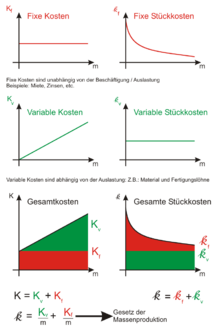 In business cost accounting, the variable costs (including variable , movable or quantity-dependent costs ) are that part of the total costs that also changes when the reference value under consideration (usually the degree of employment ) changes.

Costs that - unlike variable costs - are independent of the output volume are called fixed costs . In contrast to the fixed costs, the variable costs can be distributed over the product units according to their causation in order to determine the unit costs (nevertheless a distinction is made between fixed and variable unit costs). The proportion of variable and fixed costs is calculated through cost reversal.

Costs that also change with changing employment, but do not follow one of the cost curves listed below (e.g. maintenance costs, energy costs , depreciation ), are referred to as mixed costs (semi-variable costs).

Which costs have to be regarded as variable or fixed depends on:

The variability increases with the length of the observation horizon; in the long term, all costs can be viewed as variable.

Variable costs such as costs for raw materials , consumables and supplies that go into a product, but also labor, or freight costs.

The four most common types of costs for variable costs are: material, goods, commissions and external services.

The course of the variable cost function can be proportional, degressive, progressive or, in rare cases, regressive.

proportional (linear)
The total variable costs change in the same proportion as the reference quantity . The variable unit costs remain constant - regardless of the output quantity - and are identical to the marginal costs .

In business practice, a proportional course of the variable costs is usually assumed.