Under flood protection (rare: flood protection ) is the sum of all measures to protect the population and of property against flooding . These can be technical measures, natural retention of water quantities and measures for further precautionary measures (three-pillar strategy). 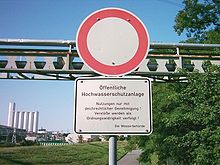 Flood protection in the form of a dike

Flood protection gate of the Orsoy fortress on the Lower Rhine

Technical flood protection, especially for rivers, is made up of the areas of retention and property protection . Possible instruments for retention are flood retention basins of various types and floodplains (so-called polders , regionally also crags ). These store larger amounts of water and are therefore able to reduce the peak runoff from flood waves.

Measures to protect property are structures along the body of water that prevent floods from spreading into endangered areas such as settlements , infrastructure , industrial areas , etc. penetration. These include flood dams ( dykes ) and flood walls as stationary structures, but also mobile elements that are installed in the event of a flood warning or become effective in the form of sluices .

Further flood protection measures can be taken, e.g. B. with watertight windows, with additional panes on windows or mobile systems that can be set up without auxiliary devices.

At the moment there is no mobile flood protection system that can be used anywhere and has building authority approval. Nevertheless, various systems have proven themselves in scientific studies as well as in practical tests.

Depending on the size of the catchment area of a water body and the precipitation conditions, human land use and the development of water bodies contribute to an aggravation of the flood situation by increasing surface runoff and reducing retention in the floodplain (natural floodplain) of the body of water.

Surface sealing is often mentioned as the cause of increased surface runoff, but intensive agriculture can also make a significant contribution to increased runoff formation. The fact that surface runoff occurs even on unsaturated soils is not due to the size of the pore spaces, but is due to the permeability of the top millimeters of the soil surface. There, the soil structure often becomes impermeable due to silting up when it rains. In addition, there are interventions in the natural equilibrium of the river system that accelerate the runoff, such as bank reinforcements and river straightening .

In particular, extensive embankments even of agricultural land, but also weirs and dams have done their bit to ensure that the floodplains as natural retention areas (natural floodplain areas) and complex ecosystems have disappeared from the landscape in large parts of Europe and North America.

Through incentive mechanisms such as funding for more extensive agricultural use concepts, measures to unseal areas, decentralized rainwater management in settlement areas and the promotion of natural water development, e.g. B. river renaturation, dike relocation and floodplain networking, attempts are made to increase the natural retention again.

In this field of action of flood protection, all measures are summarized which serve the general precaution and as organizational-technical measures in the event of a flood. These include the establishment of flood warning centers, the official designation of floodplain areas in order to prevent the development of endangered areas in advance, and the preparation of emergency and disaster plans. But hydropower plants can also be constructed in such a way that they offer flood protection through their backflow capacity .

The extent of floods are classified according to their so-called annuality , which corresponds to the statistical return interval. This means that e.g. B. a 100-year flood event (flood of the century , HQ 100 ) occurs every 100 years on a statistical average. However, this does not rule out the possibility that such a flood will occur in two consecutive years. Protection goals for different areas are defined according to these return intervals. For larger, built-up areas, the 100-year return interval is generally decisive. For smaller settlements and individual objects, one now often goes over to defining the protection goal depending on the damage potential, so that the costs for protective measures do not exceed the potential damage. A frequent benchmark is the HQ 30 .

The main objective, however, remains the protection of life and limb against the effects of flood events. After the Second World War , agricultural areas in many areas of Germany were also protected against flooding with a return interval of 5–10 years. However, this practice has been abandoned for some time and older systems have been dismantled.

In Switzerland, in addition to large-scale flood protection measures in the form of dam construction and renaturation, property protection measures in particular are promoted. In twelve cantons with state building insurance companies, contributions are paid for voluntary protective measures on existing buildings. Depending on the canton, these amounts can reach up to 50% of the acquisition costs. No subsidies are granted in areas where a hazard map was already in place when a new building was built. Here, the building insurance companies take the position that these purchases are to be included in the construction costs.

After the devastating flood disaster of 1953 , when large parts of the country were under water, the parliament of the Netherlands stipulated that protection against floods must be achieved along the coast, the events with a probability of 1: 4000 in Zeeland and Friesland and up to 1: 10,000 covers in North and South Holland . A protection level of 1: 1250 for rivers was later decided. The decision was followed by thorough, scientific investigations and, with the delta plan, a technically and financially complex security program. The stipulated level of protection was achieved everywhere 30 years later, with the completion of the large coastal structures. The Netherlands is currently examining whether due to climate change, namely global warming and / or increased climate extremes, the earlier assessments of the flood dimension need to be adjusted upwards. Then the protection should be further strengthened. On January 1, 2017, the new level of protection was decided.

In the USA, flood protection was set at the level of a 230-year flood by the responsible US Army Corps of Engineers . This level is also guaranteed, but the flooding of New Orleans has led to the realization that this level of protection is insufficient.

Construction of the flood protection dam in Linz-Urfahr , which was generally required after the floods in 2002

The following protection goals are pursued in Austria:

With all flood protection measures, however, it should be noted that there is always a residual risk (system failure, exceeding the design flood ).

From 2005, car parking areas - for example at food discounters - will be built with integrated drainage ditches that feed the groundwater, do not pollute the sewer system and consequently reduce a certain source of flooding. After hundreds of game were killed on a game fence on the S5 expressway during a flood of the Danube in the left bank of the Au near Tulln in 2012, 44 6 m high game rescue hills are to be built here from 2016.

In Germany, the Water Resources Act stipulates that areas that, statistically speaking, can be flooded once every hundred years must be designated as floodplain areas in official maps and incorporated into the land-use planning . In such floodplains, further regulations are issued according to the state laws or municipal statutes. For example, the responsible water authority must be consulted in the event of interventions . The land-use planning or the water authority can prohibit measures such as building expansion or afforestation, even on private land. Areas at risk of flooding (HQ> 100, e.g. failure of a dike) must also be marked in Germany. The municipality is required to make the population aware of these dangers so that private provision is made possible. In order to avert danger from buildings, however, there is no obligation for building owners to provide technical evidence from flood loads. Comparable binding regulations in the course of a building permit, similar to the prevention of dangers from wind loads , are not applied. Private engineering evidence is limited to the determination of expected water levels and flow velocities for the largest expected flood in a period of one hundred years. The damming heights and the flow velocities from water loads on a structure are the basis of assessment for flood-proof planning and building.

There are no statutory regulations on the level of protection. There is only one ruling by the Federal Court of Justice that homeowners have an official liability claim against the flood protection agency in the event of flood damage if protection is not least guaranteed against a 50-year flood. This minimum protection has been largely achieved (also because of this case law).

On the Upper Rhine as far as Basel there is protection against a 100-year flood. In the Upper Rhine Graben there used to be protection against a 200-year flood. Due to the expansion of the Upper Rhine by France, however, huge floodplains along the former natural course of the river were lost. Therefore, a tidal wave from Basel to Mannheim to the mouth of the Neckar only takes about 36 hours instead of about 72, so that the tidal wave from the Neckar can be superimposed on large-scale heavy rainfall. The level of protection has dropped to a 100-year flood, which was almost reached in 1999. It was therefore decided in 1982 in a contract between France, the federal government and the federal states of Baden-Württemberg, Rhineland-Palatinate and Hesse to raise the level of protection to a 200-year flood again through dike heights, dyke reinforcements and the construction of polders (Integrated Rhine Program). The program is expected to be completed by 2019, but has stalled partly for legal and partly for financial reasons. The Standing Commission is responsible for coordinating the flood protection measures on the Upper Rhine. The " International Commission for the Protection of the Rhine " (ICPR) is responsible for research and for environmental protection of the Rhine bordering. The ICPR has also published a Rhine flood atlas, which contains the essential findings and defines the protection goals aimed at so far. The atlas marks all areas that are flooded during a 200-year flood.

mobile flood protection wall made of an aluminum alloy (Dresden 2013)

Against the background of climate change and the outdated climate data (calculation bases), z. B. in Saxony is now striving to be able to derive flow rates from HQ 200 without damage.

During a strong flood in southern and eastern Germany in May / June 2013 , it became clear that the measures taken after the August 2002 flood ( Elbe flood 2002 , Danube flood 2002 ) are effective.

Bavaria has spent or invested around 1.6 billion euros in flood protection since 2001; A further 700 million euros are planned by 2020. According to the Bavarian State Office for the Environment (LfU), around 400,000 people have been additionally protected since then. Dikes were rehabilitated over 420 kilometers; around 760 kilometers of waterways have been renatured. The LfU also operates the Bavarian flood news service .