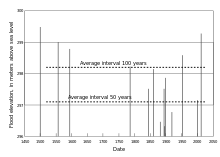 Under centennial flood or flood of the century (even 100-year runoff short HQ 100 called) is the level height or discharge quantity of a water body , which once reached every 100 years on a statistical average or exceeded.

Since it is an average value , a flood of the century can occur several times in a hundred years or be absent for centuries. Due to different statistical procedures, there is also not always full agreement on the timing of different flood events. Due to the brevity of the recordings of flow rates, there is also a large variance in the values.

This problem is exacerbated as a result of long-term trends due to climate change and the resulting increase in the number of extreme weather conditions. According to the Special Report of the Intergovernmental Panel on Climate Change on the Oceans and the Cryosphere (2019), what is a century flood in coastal areas can be expected to occur annually around 2100 at low latitudes.

This value is relevant for flood prevention and flood protection measures , where it is used to dimension flood- relevant systems such as dams and bridges.

Colloquially, a flood of the century describes a serious flood disaster .