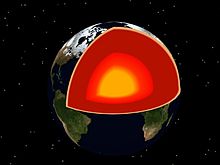 The earth's crust or crust is the outermost, solid shell of the earth . The crust is on average 35 kilometers thick and the thinnest shell in the internal structure of the earth . According to its chemical composition, it is divided into the oceanic and continental crust that exist today .

There are two types of crust material:

These two types of the earth's crust differ in their formation, composition, density and thickness. The data obtained so far about other planets and their moons indicate that the earth in our solar system is the only celestial body that has two different types of crust.

Oceanic earth crust arises at the boundaries of drifting lithospheric plates on the ocean floor , where basic magma continuously emerges from the earth's mantle , solidifies and forms the global system of mid-ocean ridges (MOR). This “young” crustal rock consists mainly of basalt-like gabbro and has a relatively high density (around 3 g / cm³). The oceanic crust of the earth is only five to seven kilometers thick, only occasionally is it over ten kilometers thick.

According to current knowledge, the process of ocean floor spreading is driven by convection currents in the earth's mantle. The neighboring lithospheric plates typically diverge at speeds of a few millimeters to centimeters per year (spreading rate).

Transitional area between the continental sial and oceanic Sima earth crust. The latter pushes itself under the Sial crust (see Conrad discontinuity ).

Continental crustal rock, on the other hand, is lighter (density around 2.7 g / cm³). On average, the chemical composition is similar to that of granite (“acidic”, silica SiO 2 content over 66 percent) and its metamorphic twin rock, gneiss . It is the end product of a process that caused the less dense minerals to rise to the surface of the earth throughout the history of the earth. Isostasis and volcanism played the main role, but also metamorphosis and chemical-physical processes of weathering , which lead to the deposition of loose rock ( sediments ).

The continental crust is 30 to 60 km thick, extending much further under mountainous lands (especially under long mountain ranges ). The average is almost 40 km, local extreme values ​​are <25 km (coastal plains, shelves , rift valleys ) and> 70 km ( Himalayas , Andes ). Because of their lower density, the continents “swim” higher on the Earth's mantle than the oceanic crust, but at the same time they dive deeper into it because of their significantly greater thickness (analogous to a high iceberg ). Since rocks behave plastically under the temperature conditions at the crust-mantle boundary and with the crustal movements that are always " geologically slow " on a large (continental) scale , an extensive equilibrium has been established over the course of millions of years .

The simatic, oceanic crust layer (or petrographically related material) presumably continues partly under the continental sial crust and forms its lower third (see picture and Kertz p. 209 ff. ). From the analysis of earthquakes could waves Andrija Mohorovičić demonstrate 1909 speed jump, and thus indirectly to the increase in density to the mantle out of 0.5 g / cc or is almost 20%. This so-called Mohorovičić discontinuity ( Moho for short ) runs at varying depths under the continents (according to Ledersteger, an average of 33 km deep, according to modern seismics 38 km). Around 1920 Victor Conrad discovered a second leap in density, the Conrad discontinuity named after him at a depth of about 20 km. It corresponds to the (not entirely continuous) separating layer between Sial and Sima crustal rocks. Usually today a distinction is made between upper and lower crust .

Almost all chemical elements - namely 93 of the currently (2018) 118 elements of the periodic table  - can be found in the earth's crust, including the oceans and atmosphere. Oxygen makes up the largest part with 46 percent by weight, followed by silicon with 28% and aluminum with 8%. Other important components are iron and magnesium as well as calcium and sodium . The remaining 85 elements together make up about 5.6%, most are only present in traces.

Origin in the history of the earth

A few tiny zircon minerals can be used to demonstrate the existence of a crust around 4.4 billion years ago. The composition of this crust at the earliest stage of the Earth's formation is controversial: Both the possibility of a mafic and an already felsic crust are being considered. Both presuppose the existence of an earth mantle . There is no evidence of the existence of a crust that was already present before the shell was built . From this one can conclude that there was either no solid crust or that an anorthositic ( KREEP -like) or komatiitic (ultramafic) crust that was already present was completely mixed with the earth's mantle within a short geological period, which is why reservoirs are repeatedly postulated in the lower mantle which are said to contain the remains of such crusts. The dimensions of this crustal section, which was already solidified at this early point in the earth's history, are also highly controversial.

Map of the thickness of the earth's crust

The fact that the temperature rises downwards has been known for millennia from mines and is evident from volcanism . Even earthquakes were some early conclusions. That is why it was already assumed in ancient times that deeper layers of the earth are glowing liquid. The Greek natural philosophers were already concerned about the exact structure and origin of the earth.

The deepest borehole for exploring the earth's crust is the Kola borehole (1970–1989); it reached the record depth of 12,262 meters on the Russian Kola peninsula . In Germany, the continental deep borehole ( KTB ) (1987–1995) reached a depth of 9,101 meters. The well was stopped at this depth because the temperatures were higher than expected (see geothermal depth ).

The earth's crust is only a fraction as thick under the oceans as under the continents. However, drilling at the bottom of the deep sea from a ship on the sea surface is technically more complex. For the first time, the Japanese research vessel Chikyū (commissioned in 2005) is attempting to drill holes up to 7 km deep into the sea floor in order to penetrate the oceanic crust.