Inner structure of the earth

Structure of the earth: most important shells and their average depth (chemical and rheological model mixed)

The density stratification in the earth's body is accompanied by a chemical differentiation, i. That is, each spherical shell has a characteristic chemical composition. The core has a radius of about 3450 km and consists mainly of iron and nickel . This is followed by the 2900 km thick earth's mantle made of silicates and oxides with a high proportion of iron and magnesium . The outer shell of the earth's body is formed by the relatively thin (approx. 5–70 km) crust. This also consists mainly of silicates and oxides, but with a lower iron and magnesium content and an increased amount of aluminum and elements that are "insoluble" in the mantle rock (so-called incompatible elements ). With its structure of silicate crust and silicate mantle and an iron core, the earth is the prototype of the four terrestrial planets of the inner solar system .

In addition to the division of the spherical shells according to chemical aspects, another model is used that is based on the rheological properties of the material in the earth's body. This divides the earth's core into a crystalline inner core (radius: 1230 km) and a thin outer core (thickness: 2200 km). In addition, it does not differentiate between crust and mantle, but combines the crust with the rigid outermost part of the mantle to form the lithosphere , which is followed by a viscous mantle at the bottom.

Structure of the earth 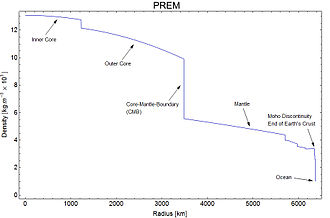 Radial density distribution of the earth according to the PREM . The greatest change in density occurs at the core-mantle boundary (CMB)

Earth's gravitational field according to the PREM and for rough approximations (green). The acceleration due to gravity has its maximum value at the core-mantle boundary with its large density jump. The linear approximation of the density reproduces a maximum inside, while with constant density the field would increase linearly up to the surface.

At the boundary between the core and the cladding , the density changes from 10 to 5 g / cm 3 due to the material . The differentiation into core and mantle material occurred within the first few million years after the formation of the dust in the primeval solar nebula through melting when protoplanets collided . A few ten million years later, a deep magma ocean emerged again during the collision between Proto-Earth and Theia , whose metallic cores united, see formation of the earth . The core was still completely liquid at the time. A few 100 million years later - it is unclear whether before or after the onset of deep mantle convection - iron and nickel began to crystallize in the center.

The earth's mantle makes up around two thirds of the earth's mass ; the mean density of its shells is between 3¼ and just under 5 g / cm 3 . The upper limit of the earth's mantle is called the Mohorovičić discontinuity (also called Moho for short ). It was detected as early as 1909 because of its striking density jump of around 0.5 g / cm 3 , which deflects strong earthquake waves or reflects them to the earth's surface.

The asthenosphere belonging to the upper mantle (derived from the Greek asthenos "soft") extends, depending on the thickness of the lithosphere, from about 60–150 km to a depth of about 210 km. Due to partially melted rock material, it shows reduced seismic velocities and a viscoplastic rheology . With its fluidity, it is an important part of the concept of mantle convection: The lithospheric plates "float" on it, which are shifted against each other by the convection currents of the earth's mantle and thus lead to tectonic processes such as continental drift or earthquakes .

The earth's crust is the outer layer of the lithosphere - which also includes the rigid lithospheric mantle of the upper earth's mantle - and consists of two very different types of crust:

The upper boundary of the earth's crust is either the bottom of the water or the interface between the atmosphere and dry land. This means that sediments in lakes and seas are added to the earth's crust.

The thickness of the continental crust is between 30 and 60 kilometers with a global mean around 35 km. It is mainly composed of crystalline rocks , the main components of which are quartz and feldspar . Chemically, the continental crust is made up of 47.2 percent by weight (62.9 atomic percent or 94.8 percent by volume) of oxygen, i.e. it forms a dense, rock-hard packing of oxygen, which is bound in the form of silicon dioxide (quartz), for example. In the earth's crust and on its surface, the rocks are subject to a constant transformation process, which is also known as the rock cycle . Today there are no more rocks that have remained unchanged since the first crust formation in the history of the earth . The oldest rocks ever found on earlier continental margins ( terrane ) have a protolith age of 4.03 billion years (see also The oldest rock ).

Exploration of the shell structure of the earth

Knowledge of the structure of the earth comes from various geophysical sources, geochemical or mineralogical analyzes of volcanic rocks, laboratory experiments on the stability of minerals and analogies to extraterrestrial celestial bodies.

The first indications of the earth's inner material resulted from its mean density of 5.5 g / cm 3 , which could be calculated using the law of gravitation by determining the earth's mass . Since rocks close to the surface have an average of 2.7 g / cm 3 , the interior of the earth must be at least 2 to 3 times denser (iron has about 8 g / cm 3 ).

Measurements of the vertical direction showed as early as the early 19th century that the interior of the earth has a lower density under high mountains . Precise gravity measurements ( gravimetry ) soon revealed that the solid earth's crust is thicker there than elsewhere, and that the earth's mantle below consists of heavier rocks. Large mountain massifs, like icebergs , dive deeper into the earth's interior the higher they are. This “swimming balance ” is called isostasis . By satellite geodesy can be similarly even deeper anomalies of the Earth's mantle locations.

The deepest well ever carried out took place in Russia on the Kola peninsula ( Kola well ) and led to a depth of 12.3 km. Here the uppermost layer of the continental crust could be explored, which at this point has a thickness of about 30 km. Another borehole, the so-called continental deep borehole (KTB), which has reached 9.1 km, was carried out near Windischeschenbach in the German Upper Palatinate . With a planned depth of 14 km, it would have been possible to explore the continental crust at the presumed seam where parts of the continents of Ur-Africa and Ur-Europe, drifting on the Earth's mantle, collided 300 million years ago (see also Armorica ).

Deep boreholes move in the upper to middle crustal area and can therefore only provide a small insight into the interior of the earth. If one were to reduce the earth to the size of an apple, our deepest drillings would correspond little more than drilling into the shell. Advancing to greater depths by drilling is currently beyond the technical possibilities: The high pressures (at a depth of 14 km approx. 400  MPa ) and temperatures (at a depth of 14 km approx. 300 ° C) require new solutions.

The greatest depth from which material penetrates to the surface of the earth and thereby creates the various forms of volcanism is found at the boundary layer between the outer core and the lower mantle, as can be observed, for example, in plumes . The material extracted from an eruption comes from different areas of the mantle and can be analyzed accordingly.

Further information on the properties of the mantle can be obtained by researching the mid-ocean ridges . The mantle, which lies directly below the plate boundary, rises to fill the space in the resulting gaps. Normally, the mantle rock melts due to the pressure relief and forms the new ocean crust on the sea ​​floor after cooling . This approximately 8 km thick crust seals the access to the original mantle rock. An interesting exception is possibly the mid-ocean ridge between Greenland and Russia , the Gakkel Ridge , which is the slowest spreading ridge on earth at less than 1 cm per year. The earth's mantle rises very slowly here. Therefore, no melt and consequently no crust form either. The mantle rock could therefore be found directly on the sea floor.

The reference speed models PREM and IASP91 in comparison. The lines show the seismic velocities of the P (dark green for PREM, black for IASP91) and S waves (light green or gray) inside the earth

The earth is shaken every day by earthquakes that are registered by measuring stations around the world. The seismic waves emanating from earthquakes traverse the entire body of the earth, with the seismic energy spreading in the various layers at different speeds. The propagation speeds depend on the elastic properties of the rock. The structure of the earth's interior can be examined from the transit times of seismic wave trains, the occurrence of reflected waves and other seismologically measurable effects such as damping or scattering .

In the year 1912 made Beno Gutenberg first time the border between the silicate mantle material and the nickel - iron - core at a depth of 2900 km from. Shortly before, the Croatian geophysicist Andrija Mohorovičić had discovered the interface between the earth's crust and mantle named after him . Both were possible because marked jumps in impedance - mainly caused by sudden changes in the propagation speed of earthquake waves, so-called "seismic discontinuities " - generate measurable reflected phases. Discontinuities can be chemical in nature. These are based on a change in the chemical composition of the earth's strata, resulting in changed elastic properties. In the transition zone , for example (MTZ, Eng .: mantle transition zone ) but there are also discontinuities associated without a change in chemical composition. These are based on phase transformations , with a mineral transforming itself into a differently structured and usually denser mineral of the same composition with an increase in pressure and / or temperature.

Meteorites, age of the earth

Our ideas about the substance of the earth's interior are based, in addition to the methods mentioned above, on analogy conclusions based on the composition of meteorites . Chondritic meteorites have hardly changed since the formation of the solar system. It is therefore believed that the overall chemical composition of the earth is similar to that of the chondrites, as these in turn are believed to resemble the planetesimals from which the earth was formed. The meteorites also include fragments of differentiated mother bodies: iron meteorites and the pallasites belonging to the stone-iron meteorites presumably come from the earth's core or the transition area between core and mantle of differentiated asteroids, while the achondrites come from their mantle or crust. The meteorites can therefore be used to investigate materials from the core and mantle area that are not accessible for direct investigations on Earth.

Meteorites play a huge role in dating the solar system and also the earth. Clair Cameron Patterson and Friedrich Georg Houtermans first concluded that the earth was 4.55 billion years old in the 1950s by means of uranium-lead dating on the iron meteorite Canyon Diablo . Dating methods based on other isotope systems ( e.g. 87 Rb- 87 Sr, 147 Sm- 143 Nd) have since confirmed this age. The oldest material found on earth are zirconium crystals in Western Australia with an age up to 4.4 billion years, which thus forms a lower limit of the earth's age.

Commons : Structure of the Earth  - collection of pictures, videos and audio files