The asthenosphere follows directly below the lithosphere . The rock in this layer is solid, but behaves plastic (ductile) in geological time periods .

Map of the lithospheric plates

The lithosphere consists of the upper and lower crust of the earth and the relatively rigid part of the upper mantle, the lithospheric mantle . The boundaries between these layers are seismologically verifiable and are called discontinuities.

The Mohorovičić discontinuity (short: Moho) forms the boundary between the crust and the underlying lithospheric mantle, on which an abrupt increase in the wave speed is evident due to the higher density of the mantle rock compared to the crustal rocks. At the lower-lying transition from the lithosphere to the asthenosphere, on the other hand, the wave speed suddenly decreases ( low velocity zone ), this is the Gutenberg discontinuity . The Conrad discontinuity forms the boundary between the upper and lower crust in the continental area .

The thickness of the entire lithosphere varies from a few kilometers on the mid-ocean ridge to 100 km or 200 km on the continents and averages around 100 km. The Moho is located in the continental lithosphere at depths of 30–50 km. With heavily thickened crust, e.g. B. under a young mountain range of folds , it is even at depths of up to 80 km. In the oceanic lithosphere, the Moho is only 5–7 km deep. Below the spreading zone of a mid-ocean ridge , the Moho directly indicates the transition to the asthenosphere, as the lithospheric mantle is missing there. 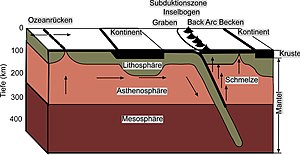 Schematic representation of the dynamics of lithospheric plates: divergence on mid-ocean ridges and convergence on subduction zones as well as a possible initial form of plate divergence (back arc expansion).

Alternative, less schematic representation of the dynamics of lithospheric plates

The rigid plates “float” on the comparatively ductile (yielding) asthenosphere . They are in constant motion with maximum speeds of more than 10 centimeters per year. Thermal convection currents in the earth's mantle are assumed to be one cause of this continental drift .

The dynamics of the lithospheric plates are commonly referred to as plate tectonics. With regard to the plate movements, there are three different modes: