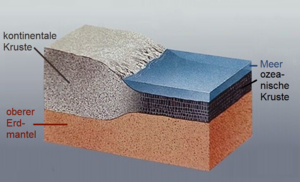 The continental crust , also briefly continental crust forms in the structure of the earth along with the oceanic crust , the top stratum of the lithosphere . It consists of igneous rocks with a medium to high SiO 2 content (mainly granitoids ), sometimes thick sediments and the resulting metamorphic rocks . Because of the high proportion of aluminum (Al) compared to the oceanic crust and the generally high proportion of silicon (Si) , the simplistic abbreviation Sial (also SiAl ) and the name SiAl are used for the continental crust (the outermost layer of the earth) -Layer in use.

The density of the continental crust is about 2.7 g / cm 3 lower than that of the oceanic crust (about 3.0 g / cm 3 ). Both are underlain by the lithospheric mantle , the solid part of the upper mantle . The crust and the lithospheric mantle “float” isostatically on the asthenosphere . The thickness of the continental crust is on average 35 km under plains and increases according to the isostatic behavior under high mountains to up to 80 km. The thickness of the oceanic crust is significantly less at 5–8 km.

The continental crust is divided into an upper, brittle area and an underlying, ductile area. The boundary zone between the areas is called the Conrad discontinuity .

From a depth of around 10–20 km, the pressure and temperature are so high that the main mineral components of the crust, quartz and feldspar , no longer become brittle when exposed to tectonic stress, but react ductile through creeping at crystal boundaries or recrystallization . In the ductile area, the earth's crust can be deformed plastically , i.e. seamlessly and permanently . The position of the transition zone depends on the heat flow and the fluid content of the earth's crust. In magmatic active regions with increased heat flow and higher fluid concentration, the ductile area begins at a shallower depth, making the earth's crust more easily deformable.

The bottom of the crust is bounded by the Mohorovičić ( Moho ) discontinuity . Below is the lithospheric mantle, which is solid to a depth of around 80–120 km and, together with the earth's crust, builds up the lithospheric plates. A low degree of melting causes the asthenosphere ( earth's mantle ) below to react plastically and thus enables the lithospheric plates to shift, whereby the lower lithosphere can probably also have mobility beyond the crust (due to delamination or displacement). 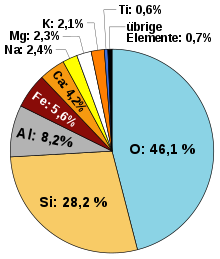 Frequency of chemical elements in the continental crust (mass fraction)

The first continental crust was formed in the Hadean . Some tiny zircon grains with an age of up to 4.4 billion years ( Ga ) are considered to be the oldest preserved mineral substance on earth . These are so-called detritic zircons that can be found today in the Jack Hills in western Australia in metamorphic sedimentary rocks (metasediments), the deposition period of which is estimated to be around 3 Ga. The results of the investigations of the ratio of the stable isotopes contained in them ( δ 18 O , 176 Hf / 177 Hf) and of foreign mineral micro-inclusions (including potash feldspar , quartz and monazite ). were interpreted in part as evidence of the existence of a highly differentiated granitic continental crust and of chemical weathering under the influence of cold surface waters on the early "primeval earth". However, these interpretations are not without controversy, and there is only general agreement that the zircons once did not crystallize in primordial, but at least moderately differentiated crust or in at least intermediate igneous rocks . Based on the evidence of diamond inclusions in 4.25 Ga old detritic zircons from the metasediments of the Jack Hills, it is very likely that at least two continental blocks already existed at this time and collided with each other.

There are indications that part of a stone found during the Apollo 14 moon mission originally crystallized on earth; with a dating of 4.0–4.1 Ga, this would probably be the oldest stone on earth.

The oldest known terrestrial rocks on earth in the Nuvvuagittuq greenstone belt (controversial dating: 4.03 Ga) indicate that the first continental crust was formed by melting of submerged oceanic crust. Due to the higher mantle temperature, which is assumed for the period between 4.5 Ga and 3.0 Ga, around two thirds of the crust present today was probably formed during this period. Thereafter, the temperature of the earth's mantle fell, so that less or no melting of subducted oceanic crust could take place in subduction zones (see also TTG complex or Adakit ). In line with this theory, eclogites appear as unmelted rocks in the oceanic crust only from around 3 Ga.

Today's lack of large parts of the crust formed at that time is due to the fact that a large part of today's crustal rock was "recycled" again in the context of mountain formations or through the rock cycle and actually goes back to significantly older crust. In most of the earth's basement complexes, for example, much older zircons can be found in the rocks, which suggest that the original material ( protolith ) is much older (see also German basement ). Consequently, the continental crust, as it usually exists today, must have been shaped and overprinted by a whole series of different geological processes. Island arcs and / or oceanic plateaus can stand at the starting point of the crustal development , which due to their relatively low density are not subducted in the course of the plate movements, but rather accretion to one another on the surface of the earth or to existing continental cores. During the corresponding mountain formation, among other things, mostly granitoid partial melts develop in the lower crust. The associated depletion of SiO 2 in the lower crustal levels and the placement of granitoid plutons in higher crustal levels leads to vertical differentiation with the formation of a more rockic (acidic) upper crust and a more mafic (basic) lower crust. If the density of the lower crust is increased further through eclogitization , it can shear off and sink into the earth's mantle (delamination).

It is believed that large parts of the crust were only lifted from the ocean 2.5 billion years ago.

The natural mean heat flux density at the earth's surface is 0.065 W / m². This corresponds to an average geothermal gradient , i.e. an average increase in temperature with depth, of 3 K per 100 m. However, depending on the regional geological situation (dominant rock type, crust thickness), these values ​​can be significantly exceeded or undercut.