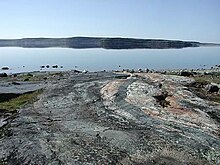 Part of the Nuvvuagittuq greenstone belt

The Nuvvuagittuq Greenstone Belt is a rock unit on Hudson Bay in northern Canada in the province of Québec , which is one of the oldest rocks on earth, possibly up to 4.4 billion years old. It contains microscopic structures that could be the oldest fossils on earth.

The Nuvvuagittuq greenstone belt is located in the northern part of the Superior Craton , the largest well-preserved archaic craton on earth. The superior craton, along with the slave craton , the Wyoming craton and the North Atlantic craton, is one of the four surviving archaic cratons in the north of the USA , Canada and Greenland . It consists of greenstone belts and metamorphic sediments into which intrusives of granitic composition have penetrated. In the northeast and southwest it contains highly metamorphic belts of gneiss . The Nuvvuagittuq greenstone belt is located in the largest of these gneiss areas, the Minto Belt or Minto Block, in the northeast of Hudson Bay.

The greenstone belt is exposed in an approximately 3 × 4 km area directly on Hudson Bay. The name of the unit was chosen after a hill in the north of the unit, formerly it was also known as the Porpoise Cove Formation . It contains metamorphic volcanic and sedimentary rocks in a isoclinal Synform , folded over to a more open, south incident Synform. The occurrence is surrounded by tonalitic gneiss of the so-called Boizard sequence.

A characteristic member of the rock unit are light gray to beige mafic amphibolites with cummingtonite instead of the hornblende ( faux-amphibolite , i.e. false or deceptive amphibolite ) that usually occurs in the superior kraton in the dark to black amphibolites . The rock takes up most of the greenstone belt. Integrated into the amphibolite are ultramafic sills , which can be traced back to an originally komatiitic magma , as well as pegmatites . Felsic mica schists , which are referred to as former tuffites , are rare .

In addition to the igneous rocks , transformed sedimentary rocks have also been preserved and inserted into the amphibolite as band-shaped deposits. As in other archaic rock units, oxide- and quartz-rich band ores ( Banded Iron Formation , BIF) are represented. Certain gneisses may be interpreted as conglomerate units.

There are indications that the various subunits of the greenstone belt are still in their original stratigraphic association despite the strong overprinting . All rocks were subject to a maximum metamorphosis up to the upper amphibolite facies and a later retrograde metamorphosis ( diaphthoresis ).

The rocks and their ages are still the subject of research. The ages of these rocks, initially published in scientific journals, were between 3.6 and 3.8 billion years ago. The possibility that some of the rocks in the Nuvvuagittuq greenstone belt could be up to 4.28 billion years old was discovered in 2008 by researchers at McGill University in Montreal . These results have been questioned by other researchers. Further investigations are still in progress, with an age of approx. 4.4 billion years being determined in 2012, which is, however, strongly doubted.

In contrast to the igneous rocks of the approximately equally old Acasta gneiss from northwest Canada , some rocks of the Nuvvuagittuq greenstone belt were deposited on the surface of the earth similar to those of the 3.8 billion year old Isua greenstone belt (supracrustal). The transformed sedimentary rocks are an indication that a hydrosphere must have already existed at the time of their deposition .

While the existence of life at the time of the deposition of the sedimentary protoliths of the Nuvvuagittuq rocks has already been discussed in this context, evidence for the presence of the oldest fossils on earth in Nuvvuagittuq metasediments was presented in a study published in 2017. The rocks in which the microscopic structures (filaments and tube-like structures up to half a millimeter in length) interpreted as remains of microbes were found are certainly at least 3.77 and possibly up to 4.28 billion years old. These are ribbon iron ores (BIFs), which are interpreted as precipitations from submarine hydrothermal springs . They have a carbon isotope profile ( δC 13 ), which probably indicates metabolic processes of living beings at the time of precipitation in the deposition area. Micrometer-sized spheres and rosettes associated with the filaments, which contain apatite , carbonates and graphite , all minerals that can arise from biomass, and larger apatite grains with graphite inclusions are also cited as evidence that the filaments should have been formed biogenically. The oldest known, largely unambiguous fossil record of microbial life comes from Western Australia (Pilbara Kraton) and is 3.46 billion years old.