This article describes the titanium-containing mineral perovskite. For the silicate minerals occurring in the earth's mantle, see silicate perovskite

Perovskite is a relatively common mineral from the mineral class of " oxides and hydroxides " with the chemical composition CaTiO 3 . From a chemical point of view, it is a calcium - titanium oxide or calcium titanate, i.e. a compound from the group of titanates .

The first description of perovskite comes from the German mineralogist Gustav Rose (1798-1873) from the year 1839. He discovered the unknown mineral in the Druse a rock sample from Achmatowsk near Zlatoust (Urals), he of the upper Bergmeister treasurer of St. Petersburg had received. Rose described the crystal form, determined the hardness (5.5 on the Mohs hardness scale ) and the density of the mineral and carried out numerous chemical tests, which enabled him to determine the components calcium and titanium (IV) oxide without any doubt. He named the new mineral perovskite after the Russian politician and mineralogist Lev Alexejewitsch Perowski (1792-1856). Akhmatovsk is today the type locality of perovskite.

Since the founding of the International Mineralogical Association , perovskite has been the internationally recognized mineral name for the naturally occurring calcium titanium oxide CaTiO 3 .

Already in the outdated, but still in use 8th edition of the mineral classification according to Strunz , the perovskite belonged to the mineral class of "oxides and hydroxides" and there to the department of "oxides with the molar ratio of metal: oxygen = 2: 3", where he named the "Perovskite series" with the system no. IV / C.10 and the other members Barioperowskit , Isolueshit , Latrappit , Loparit- (Ce) , Lueshit , Macedonit , Natroniobit and Tausonit formed.

The 9th edition of Strunz's mineral systematics , which has been in effect since 2001 and is used by the International Mineralogical Association (IMA), assigns perovskite to the expanded section of "Oxides with the molar ratio of metal: oxygen = 2: 3, 3: 5 and comparable" a. This is further subdivided according to the relative size of the cations involved , so that the mineral can be found according to its composition in the sub-section “With large and medium-sized cations”, where together with Lueshite the “Perovskite-Lueshite Group” with the system -No. 4.CC.30 and the other members Barioperowskit, Lakargiit , Latrappit and Natroniobit forms.

The systematics of minerals according to Dana , which is mainly used in the English-speaking world , assigns perovskite to the class of "oxides and hydroxides" and there in the "oxides" category. Here he is also the namesake of the "perovskite group" with the system no. 04.03.03 and the other members latrappite, loparite (Ce), lueshite, tauonite, isolueshite, barioperovskite and lakargiite within the subdivision of " Simple oxides with a cation charge of 3+ (A 2 O 3 ) ".

Ideally, perovskite would crystallize in the cubic crystal system in the space group Pm 3 m (space group no. 221) with a lattice parameter of the unit cell of approx. 3.80 Å. However, due to the too small ionic radius of the Ca 2+ cations, the crystal structure of CaTiO 3 is distorted, which explains the lower orthorhombic symmetry. The term perovskite structure as an important structure type usually refers to the cubic crystal structure in which the eponymous prototype itself does not crystallize. Template: room group / 221 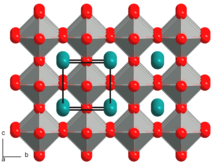 The analogous compounds of the larger homologues of calcium, strontium and barium , on the other hand, crystallize in the undistorted cubic structure: Strontium titanate SrTiO 3 , also known as the mineral tauonite , with a lattice parameter of a  = 3.90 Å; Barium titanate BaTiO 3 , also known as a mineral since 2007 ( barioperovskite ), with a  = 4.01 Å and only one formula unit per unit cell. The degree of distortion of a compound ABO 3 in the perovskite structure can also be estimated using Goldschmidt's tolerance factor t , which is defined as follows:

The crystal structure of perovskite can be described in two different ways. The titanium atoms are each surrounded by six oxygen atoms in the shape of octahedra . These [TiO 6 ] octahedra form a three-dimensional network over common corners, which can be described using the Niggli notation as follows:

The gaps in this network contain the calcium atoms , which have a coordination sphere of twelve oxygen atoms in the form of a cuboctahedron as a coordination polyhedron . Alternatively, the structure can also be described as a cubic closest packing of spheres , which is built up jointly by calcium and oxygen. Every fourth octahedral gap in the spherical packing is occupied by titanium, namely the one that is only surrounded by oxygen atoms. Since there are as many octahedral gaps as there are packing particles in the closest packing of spheres, the empirical formula CaTiO 3 results again .

A number of other compounds crystallize in the cubic perovskite type , including industrially important ferroelectrics such as the above-mentioned barium titanate (BaTiO 3 ), but also other oxides such as CaZrO 3 or CaSnO 3 as well as fluorides and nitrides with compositions such as e.g. B. KNiF 3 , KMnF 3 and ThTaN 3 .

Other structures can also be derived from the perovskite structure. There is only one kind of A-atom in perovskite. If half of all A atoms are systematically exchanged (i.e. every second one) for an atom A ', one obtains the elpasolite structure (AA'B 2 O 6 ). Their unit cell corresponds to eight times that of perovskite.

If the central atoms surrounded by twelve oxygen atoms (i.e. the calcium atoms in the case of perovskite) are removed from the structure, another common type of structure arises, the rhenium (VI) oxide structure, which can be described as a defect structure variant of the cubic perovskite structure.

Perovskite most often crystallizes in cubic form , with the cubes being slightly distorted due to the orthorhombic symmetry. Octahedral or cuboctahedral single crystals are rarer . The octahedral surfaces , as well as some rhombic dodecahedron surfaces, are at least indicated in many cube-shaped crystals. The possible crystal shapes are shown below.

In addition to calcium and titanium, perovskite can contain traces or even larger amounts of other metals . Instead of calcium, it can contain alkali metals , rare earth metals and, more rarely, iron ; niobium and subordinate tantalum and zirconium are often found on the titanium positions .

Varieties with a very high content of rare earth metals (especially cerium ) are called knopite , very niobium-rich perovskites are called dysanalytics , and a combination of both is also known as loparite . Taking into account the elements it frequently contains, the chemical composition of perovskite can also be given more generally as (Ca, Na, Fe 2+ , Ce, Sr) (Ti, Nb) O 3 .

Perovskite is formed by crystallization from titanium-rich magmas and is a common component of low-silica ( mafic ) rocks such as syenite , kimberlite or carbonatite , but it also occurs in carbonate-rich metamorphic rocks such as skarn . Perovskite could also be detected in carbonate-containing chondrites ( stone meteorites ). The accompanying minerals ( paragenesis ) include nepheline (K, Na) AlSiO 4 , titanite CaTiSiO 5 , ilmenite FeTiO 3 , magnetite Fe 3 O 4 , and - particularly importantly - melilite : its occurrence indicates the occurrence of perovskite (and vice versa) .

There are numerous sites of perovskite worldwide, in addition to the type locality of Akhmatovsk and other places in the Urals , these include the Kola peninsula (Russia), the Eifel and the Kaiserstuhl (Germany), Zermatt (Switzerland) as well as the Val di Susa and Val Malenco (Italy).

Perovskite can be produced artificially at temperatures of more than 1300 ° C through the reaction of calcium oxide CaO and titanium dioxide TiO 2 with subsequent crystallization:

The melting point of the end product calcium titanate is 1975 ° C and thus slightly higher than that of titanium dioxide at 1843 ° C.

Occurrence in the earth's mantle

The dominant mineral phase of the lower mantle (between 660 and 2900 km depth) is also known as perovskite. It is an iron and magnesium-containing silicate with the composition (Mg, Fe) SiO 3 , which has the same crystal structure as CaTiO 3 perovskite. The magnesium-containing end member of the mixed crystal series of this silicate perovskite was only recently detected as a natural mineral in the Tenham meteorite and was officially named Bridgmanite in 2014 .

Use of materials with a perovskite structure

Perovskites such as barium titanate are used as ferroelectrics and, for example, as dielectrics in ceramic capacitors . With compounds derived from the perovskite structure, the later Nobel Prize winners Johannes Georg Bednorz and Karl Alexander Müller achieved the breakthrough in the novel ceramic high-temperature superconductors in 1986 . It was lanthanum-barium-copper oxides.

Suitable perovskites can be used to build light emitting diodes .

In addition, certain perovskites can be used for the production of solar cells . A working group led by Michael Graetzel achieved efficiencies of 15% on small prototypes under laboratory conditions. At the beginning of 2014, an efficiency of - officially unconfirmed - 19.3% was achieved under laboratory conditions. In 2017, Swiss researchers succeeded in increasing efficiency to over 22 percent. This efficiency is in the range of the best silicon-based solar cells (around 25 percent) in mass production. The problem with perovskites as a solar cell material is the amount of lead required for conventional perovskite cells , since if the use of lead in solar cells is prohibited in the EU under the RoHS directive, economic usability is in question. In addition, perovskite solar cells are sensitive to moisture and so far have a significantly shorter service life than solar cells made from other materials. With new research approaches these problems should be eliminated and efficiencies of 23% should be achieved. Although it is possible in principle to replace lead with tin , attempts of this kind have so far been largely unsuccessful, as tin gradually oxidizes and the crystal structure of the perovskite is lost. As of 2014, the efficiency of lead-free Perovskite cells based on a CH 3 NH 3 SnI 3 structure was a good 6%. A decisive step in the development of lead-free perovskite cells is the prevention of the oxidation of the tin content in the cell in order to ensure long-term stability. If this is successful, lead-free perovskite cells could be developed within a few years, which not only consist of non-toxic materials, but also have a higher degree of efficiency than lead-containing perovskite cells.

In implantology, perovskite enables the unusual combination of titanium or its oxide with the biological tissue of the bone: under biological conditions, perovskite (CaTiO 3 ) is formed on the surface of rough osseointegrated titanium implants . In this crystal, the bone's calcium is ionically bound rather than covalent, which was believed until recently. On the biological side, the positively charged calcium ion binds to the loci of the poly anions of the long-chain glycosamine glycans in the extracellular matrix, and on the crystal side of the implant surface to the covalently linked titanium-oxygen complex. The ionic binding type with its lower binding forces enables complete bone tissue remodeling also on the implant surface, while a covalent calcium bond to and in the TiO 2 crystal prevents the calcium ion from being freely available in the permanent remodeling process between bone tissue and the metal crystal.

The Eidgenössische Materialprüfungs- und Forschungsanstalt Empa is working in cooperation with the ETH Zurich on a perovskite-based color sensor that could enable higher resolutions and light sensitivity for digital cameras.