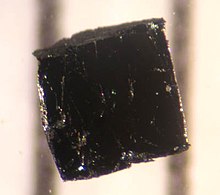 An HTSL crystal of the BSCCO type , the two lines in the background are 2 mm apart

High-temperature superconductors (HTSC), also HT c , are materials whose superconductivity - unlike conventional superconductors - does not come about through the electron-phonon interaction . Most of the time, it is not metallic , but ceramic materials. It seems certain that the coupling of electrons in pairs (“ Cooper pairs ”) is also responsible for superconductivity, but instead of the conventional singlet pairing, mainly d-wave pairing occurson, which suggests unconventional electronic pairing mechanisms. The cause has not been clarified since it was discovered in 1986.

The highest temperatures were measured at various hydrides under high pressure and reached the range of room temperature in 2020. These were conventional (metallic) superconductors.

Building on the work of Arthur W. Sleight at DuPont , who previously demonstrated superconductivity in ceramics, Johannes Georg Bednorz and Karl Alexander Müller had been experimenting with perovskite structures at the IBM Zurich Research Laboratory since 1983 . By exchanging certain atoms, they were able to specifically influence the distance between the copper and oxygen atoms in entire levels.

In April 1986 they finally discovered superconductivity with a critical temperature of 35 K in the substance lanthanum - barium- copper oxide (La 1.85 Ba 0.15 CuO 4 ). This result was first published in the Zeitschrift für Physik , where it - before especially in the US - did not get the attention it deserves. Then they presented their research in March 1987 at the great spring meeting of the American Physical Society in New York. The publication has now been received as a sensation and discussed in a special session that lasted into the night, along with other results. In a very short time, several research institutions worldwide confirmed the discovery. In autumn 1987 Bednorz and Müller received the Nobel Prize in Physics for their discovery .

Even higher values ​​(203 K or −70 ° C) were obtained in 2015 in a high-pressure phase of H 2 S. The highest known transition temperature of about 250 K (−23 ° C) at 170 GPa pressure was measured in 2018 for lanthanum hydride LaH 10 ( Mikhail Eremets et al.). In 2020, room temperature was reached in another hydride system (mixture of sulfur hydrides with methane ) (transition temperature 287.7 Kelvin at a pressure of 267 Giga-Pascal). In contrast to ceramic high-temperature superconductors, these are conventional metallic superconductors.

The technical utilization of high-temperature superconductivity was an essential driving force for further research from the start. In principle, transition temperatures above 77 K allow inexpensive cooling by using liquid nitrogen instead of helium.

The proportion of iron atoms was surprising, because every other superconducting material becomes normally conductive through sufficiently strong magnetic fields. These strong internal magnetic fields could even be a prerequisite for superconductivity. The guesswork about the basics of physics just got bigger. So far it is only certain that the current flow is carried by pairs of electrons, as described in the BCS theory . It is unclear what effect connects these Cooper pairs . It seems certain that it is not an electron- phonon interaction, as is the case with metallic superconductors .

By choosing other admixtures such as arsenic, the transition temperature can be increased from the original 4 K to at least 56 K.

If possible, high-temperature superconductors are preferably operated at 77 K, provided that the current density is low enough so that the (current-dependent) transition temperature is not exceeded. The sufficient cooling with liquid nitrogen is particularly inexpensive. There are applications of this kind in measurement technology and in cables (see below). Due to the extremely inhomogeneous current distribution over the cross section, however, the low current density cannot always be achieved.

In applications with - possibly only selectively - higher current density, the HTSL must be cooled more. If the same performance data as with conventional superconductors, such as niobium-titanium, are to be achieved, the temperature must be reduced accordingly.

For SQUIDs , with which even very small changes in the magnetic field can be measured, cooling with liquid nitrogen has been practiced for some time. However, the noise of the signal also increases with increasing temperature, which is why, for example, a material that is superconducting at room temperature would not find widespread use in electronics according to today's view. With high-temperature SQUIDs, the higher noise compared to the older helium technology is also present and undesirable, but is often accepted because of the cost and handling advantages of nitrogen cooling.

The main disadvantage of high-temperature superconductors is the brittleness of the ceramic material. Nevertheless, it was possible to produce a flexible conductor material from it by filling the ceramic material into tubes made of silver, which were then rolled out into flexible strips. A 1 km long underground cable produced in this way and cooled only with nitrogen for operation with 10  kV in the medium-voltage network has been used in the power supply of the city of Essen as part of a pilot project since May 2014. It replaces a conventional 110 kV earth line. The aim of this development is to expand the performance of medium-voltage networks and to avoid inner-city substations with their space requirements.

The cause of the high transition temperatures is currently unknown. Due to unusual isotope effects , however, it can be ruled out that electron pair formation, as in conventional superconductivity, comes about exclusively through the conventional electron-phonon interaction. The BCS theory is still applicable, however, as this theory leaves the type of interaction open and ultimately functions as a kind of “molecular field approximation”. Similar to the theory of critical phenomena for second order phase transitions, however, significantly different numbers are observed for many quantities than for conventional superconductors in the power laws valid near the critical temperature.

Instead of the electron-phonon interaction, the cause of the superconductivity is assumed to be antiferromagnetic electron-electron correlations, which, due to the special lattice structure of the ceramic superconductors, lead to an attractive interaction between neighboring electrons and thus to a pair formation similar to conventional Cooper pairs of the BCS- Lead theory . However, these interactions make the isotope effects even more difficult to explain. Alternatively, there is also a generalization of the BCS theory according to Gorkow ( GLAG theory ) or completely new explanatory approaches such as the bisoliton model .

All HTSL with really high transition temperatures show characteristic anomalies in the electrical properties and the thermal conductivities even in the normally conductive state: The electrical resistance increases linearly with the temperature even at low temperatures, and the Wiedemann-Franz law is also fulfilled in the middle T range. Normal metals show a potential-dependent temperature behavior of the resistance, and the WF law is not fulfilled in the middle T range. So far there is no theory that could explain these anomalies and the superconductivity in the cuprates at the same time.

Up to now it has also not been possible to show experimentally or to refute theoretically whether superconductivity is possible at room temperature. Earlier theoretical estimates of a “maximum transition temperature” have proven to be incorrect after the discovery of high-temperature superconductors.