The title of this article is ambiguous. Further meanings are listed under Neon (disambiguation) .

Neon ( Greek νέος néos , German 'new' ) is a chemical element with the symbol Ne and the atomic number  10.

In the periodic table it is in the 8th  main group or the 18th  IUPAC group and is therefore one of the noble gases . Like the other noble gases, it is a colorless, extremely inert, monatomic gas. In many properties, such as melting and boiling point or density , it stands between the lighter helium and the heavier argon .

In the universe Neon is one of the most common elements on Earth, however, it is relatively rare, because as with helium, much of the gas has escaped into space. It is mainly found in the earth's atmosphere , only small amounts are enclosed in rocks.

Like krypton and xenon , neon was discovered in 1898 by William Ramsay and Morris William Travers through fractional distillation of liquid air. The best-known applications are fluorescent tubes or neon lamps, in which neon is excited to glow by gas discharges in a typical orange-red color. 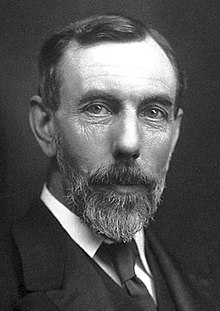 In 1894, Lord Rayleigh and William Ramsay discovered argon as the first noble gas . Ramsay isolated in 1895 and the previously only of the solar spectrum known helium from uranium ores . From the laws of the periodic table he recognized that between helium and argon there had to be another element with an atomic mass of about 20  u .

Therefore, from 1896 onwards, he first investigated various minerals and meteorites and the gases given off by them when heated or dissolved. Ramsay and his colleague Morris William Travers were unsuccessful, however, and helium and, less often, argon were found. The investigation of hot gases from Cauterets in France and from Iceland also yielded no results.

Eventually, they began examining 15 liters of crude argon isolated from liquid air and separating them by liquefaction and fractional distillation . The first element separated by this and detected in the flame spectrum was krypton ; on June 13, 1898, a lighter element was finally isolated from the lower-boiling fraction of crude argon. Ramsay and Travers called this neon , after the Greek νέος néos , German 'new' . A short time later they were able to extract another element, xenon , from the fraction containing krypton .

The first application of the newly discovered gas was the neon lamp developed in 1910 by the French Georges Claude : neon filled in a glass tube is excited to glow by high voltages.

Neon, especially the isotope 20 Ne, is an important intermediate product in nucleosynthesis in stars, but is only formed when carbon is burned . During the burning of helium at around 200 · 10 6  K , 20 Ne is not formed due to the small capture cross-section of 16 O for α-particles; only the isotopes 21 Ne and 22 Ne can arise from the heavier 18 O. If the temperature and density of a star increase significantly after the helium has been consumed, carbon burning occurs, in which two carbon atoms fuse to form an excited magnesium isotope 24 Mg *. From this 20 Ne is formed by α-decay .

If the temperature and pressure rise further, neon burns occur , in which 20 Ne reacts in α decay to 16 O or fuses with the helium nuclei formed to form 24 Mg.

Due to the higher sensitivity of 20 Ne compared to 16 O to gamma radiation , this takes place before the actually expected reactions of the lighter oxygen nucleus. Oxygen burning takes place only after the neon burns , in which 16 O heavier elements such as silicon , phosphorus and sulfur are formed.

Neon is one of the most common elements in the universe , only hydrogen , helium, oxygen , carbon and nitrogen are more common. On the other hand, like helium, it is relatively rare on earth ; the total proportion of the earth's shell is around 0.005  ppm . Most of the neon is in the atmosphere, with an average content of 18.18 ppm it is the most common noble gas after argon. From the different distribution of the light and heavy isotopes of neon on the earth and the sun, it can be concluded that a large part of the neon has escaped from the atmosphere since the formation of the earth and that preferably the heavier isotopes 21 Ne and 22 Ne have remained.

Neon is also found in small quantities in the rocks of the earth. It was found in granite , basalt rocks , diamonds and volcanic gases . Due to different isotopic compositions, it is assumed that this neon has three different origins: Primordial neon, whose composition corresponds to that of the sun and which is enclosed in diamonds or in the earth's mantle without contact with the atmosphere; atmospheric neon and neon created by spallation reactions with cosmic rays .

On gas planets like Jupiter the neon cannot escape due to the high gravity , the isotopic composition therefore corresponds to that during the formation of the planet. As determined by the Galileo space probe , the ratio of 20 Ne to 22 Ne corresponds to that of the sun, which allows conclusions to be drawn about the formation conditions, such as the temperature, when the gas planets formed.

Neon can be obtained as a by-product of air separation using the Linde process . After water , carbon dioxide , oxygen, the noble gases that boil at higher temperatures and most of the nitrogen have been separated off, a gas mixture remains that consists of 35% neon, as well as helium , hydrogen and about 50% nitrogen (both proportions ). This can be separated in different ways, so that in the end the pure gases neon and helium are obtained. One possibility is to separate the gases by condensation at different boiling points and by using the Joule-Thomson effect . After the hydrogen has been separated off via a catalytic reaction with added oxygen and the water has been removed, the nitrogen is first liquefied at 30 bar and 66  K and separated off. After the removal of the remaining nitrogen by adsorption on silica gel , a gas mixture of about 76% neon and 24% helium remains. This is first compressed to 180 bar at room temperature and then gradually cooled to 50 K. When expanding to 25 bar and then to 1.5 bar, the neon condenses, while helium remains gaseous. Fine separation is then carried out by rectification .

Line spectrum of a gas discharge in neon

Under normal conditions, neon is a monoatomic, colorless and odorless gas that condenses at 27 K (−246 ° C) and solidifies at 24.57 K (−248.59 ° C). It has the smallest temperature range of all elements in which it is liquid. Like the other noble gases apart from helium, neon crystallizes in a cubic close packing of spheres with the lattice parameter a  = 443  pm .

Like all noble gases, neon only has closed electron shells ( noble gas configuration ). This explains why the gas is always monatomic and the reactivity is low.

Neon is poorly soluble in water; a maximum of 10.5 ml of neon can dissolve in one liter of water at 20 ° C.

Like other noble gases, neon shows a characteristic spectrum of lines during gas discharges . Since the lines in the visible spectral range are predominantly in the red to yellow range, the gas appears in a typical red color during a discharge.

As a typical noble gas, neon is extremely inert; as with helium, no compounds of the element are known to date. Even clathrates in which other noble gases are physically entrapped in other compounds are unknown. According to theoretical calculations, neon is the least reactive element. The calculated enthalpy of dissociation for compounds of the type NgBeO (Ng: noble gas) is lowest for the neon compound. It turned out that even the neon analogue of the only known helium compound, HHeF, which is stable according to calculations, should not be stable. Possible explanations for these results are the larger fluorine-hydrogen distances and thus weaker attractive forces in the HNe + ion compared to the helium species or repulsive p-π interactions in neon cations.

Only a few ions in which neon is involved are known from mass spectrometric studies . These include the Ne + ion and some element neon ions such as ArNe + , HeNe + and HNe + .

Due to the loss of neon into space and its formation in nuclear reactions, the ratio of 20 Ne / 22 Ne and 21 Ne / 22 Ne of neon, which is enclosed in rocks and has no contact with the atmosphere, is not always the same. Therefore, conclusions can be drawn about the formation from the isotope ratios. For example, in rocks in which neon was formed through spallation reactions , the content of 21 Ne is increased. Primordial neon, which was trapped in rocks and diamonds before a large part of the neon was lost, has a higher proportion of 20 Ne.

Like the other noble gases, neon has no biological significance due to its inertia and is also non-toxic. In higher concentrations, it has a suffocating effect by displacing the oxygen. At pressures of more than 110 bar it has a narcotic effect .

Due to the rarity and complicated production and the associated higher price compared to the similar argon, neon is only used in smaller quantities. Neon is the filling gas for fluorescent tubes and glow lamps , in which it is stimulated to glow in a typical orange-red color by gas discharges . Neon is also used as a filling gas in flash and stroboscope lamps.

Helium-neon lasers , in which a mixture of helium and neon is used, are among the more important lasers. The necessary population inversion of the laser is achieved by the excitation of the helium and the radiationless transition from electrons to neon. The stimulated emission occurs on neon at wavelengths of 632.8 nm (red) as well as 1152.3 nm and 3391 nm (infrared). Further laser transitions, for example in the green spectral range at 543.3 nm, are possible.

Neon can be used in a mixture with oxygen as breathing gas for diving at great depths. However, it is only rarely used because it has a higher price compared to similarly usable helium and also has a greater breathing resistance .