Holmium is a chemical element with the element symbol Ho and the atomic number 67. In the periodic table it is in the group of lanthanoids and is therefore also one of the rare earth metals .

In 1878 the Swiss chemists Marc Delafontaine and Jacques-Louis Soret discovered the element spectroscopically through its deviating absorption lines. They called the new element 'X'. In 1879 the Swedish chemist Per Teodor Cleve discovered the new element independently of the two Swiss people and isolated it as a yellow oxide from impure erbium (erbium oxide). Cleve used a method developed by Carl Gustav Mosander ; it first separated off any known impurities before attempting to separate the rest. He received a brown residue, which he named Holmia, and a green residue, which was named Thulia .

It was not until 1911 that the Swedish chemist Holmberg succeeded in obtaining pure holmium oxide. It is not known whether he adopted the name Holmium, suggested by Cleve for the Swedish capital Stockholm , or regarded it as a derivative of his own name.

In natural occurrences, holmium occurs only in compounds. Well-known minerals containing holmium are:

After an elaborate separation of the other holmium companions, the oxide is converted with hydrogen fluoride to holmium fluoride . It is then reduced to the metallic holmium with calcium to form calcium fluoride . The remaining calcium residues and impurities are separated in an additional remelting process in a vacuum . 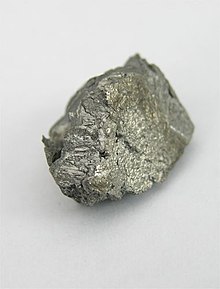 The silver-white shiny metal of the rare earths is soft and malleable.

Because of its excellent magnetic properties, pole pieces made of holmium are used for high-performance magnets to generate the strongest magnetic fields.

Holmium has no known biological function.

Holmium and holmium compounds are considered to be of low toxicity. Metal dusts are flammable and explosive.